Having spent a bunch of time talking about heavy stuff in the science blogging community, let's unwind a bit and kick the week off with a look back at an old Master's thesis. This one is from 1932, and is almost certainly a draft copy, because it's extremely cheaply bound in cardboard with the title hand-lettered on the front. There are a few corrections in the text as well, which is very short-- just 11 pages, not counting the figures at the end.

Again, this is interesting as much for what it doesn't contain as what it does. The subject matter is pretty mundane by modern standards-- just some precision spectroscopy of a mercury line in the ultraviolet-- but was getting at a rather mysterious subject at the time: the "hyperfine" structure of atoms. As you can probably guess from the oh-so-poetic name, this refers to the fact that some of the emission and absorption of light by atoms comes in the form of multiple narrow lines with extremely small spacing-- orders of magnitude smaller than the "fine structure" lines that were discovered first. The discovery of the effect dates to the 1880s, but the cause was still not nailed down very well by, well, 1932 when this was written.

They were pretty close, though, as the theory section indicates. After noting that the hyperfine lines "can not be accounted for by the ordinary electron configuration models," Scott suggests (correctly) that it must be some influence of the nucleus. There's a bit of discussion about whether this could be an isotope effect, then:

Pauli has shown that the hyperfine components could be accounted for by the assumption of a "Ausgezeichnete" or "Particular" axis. The axis could be associated with a magnetic moment, whose interaction with extra-nuclear electrons would cause sufficient variation of the energy levels to account for the hyperfine structure.

Pauli's paper is from 1924, so a moderately prescient piece of work. The hyperfine structure, we know now, is due to a magnetic interaction between the spin of the electron (which causes the electron to behave like a tiny magnet; the name "spin" is because this is associated with an intrinsic angular momentum as if the electron was spinning, though it has odd properties that mean it's not literally spinning) and the spin of the nucleus, which ditto. Since both electron and nucleus behave like little magnets, the energy of the electron depends on the relative orientation of these two magnets-- if one is aligned along the field of the other, the energy is lowered by a tiny amount, and flipping one over will raise the energy by a similar amount.

Hyperfine structure is present in all sorts of atoms-- one of the best-known examples of a hyperfine transition is the "21-cm line" in hydrogen (frequency of 1,420,000,000 Hz) much beloved of radio astronomers. The hyperfine splittings do tend to be larger and thus easier to detect in heavier atoms-- the other really famous hyperfine transition is the 9,192,631,770 Hz transition in cesium, which serves to define the SI unit of time; it's the direct analogue of the 21-cm line, but much higher frequency.

The really interesting thing about that description, though, is the last sentence. I'm not entirely certain what "nuclear electrons" means there-- it might be a clumsy reference to the electrons approaching close to the nucleus-- but I suspect that it refers to the idea that there were electrons trapped inside the nucleus of the atom. Because, you see, the neutron wasn't discovered until 1932, the year this thesis was written. At the time, the only known subatomic particles were the electron and the proton, one negative and one positive. They knew, however, that the mass of the nucleus depended on more than just the number of protons-- the distinction between atomic number and atomic mass was worked out by Moseley before WWI. In order to account for the difference, they believed there were extra protons paired with extra electrons inside the nucleus, the combination being neutral and having the right mass to give the isotopic variance that was seen.

This isn't a very tenable model-- binding electrons into the nucleus is problematic, because the tight confinement would require the energy to be extremely high, which you can show using basically the same reasoning as the quantum virus calculation from last week-- but it's not a horrible inference based on what was known. In 1932, though, James Chadwick in the UK showed that certain types of radioactivity involved a neutral particle with the same mass as a proton, and thus officially discovered the neutron.

So, again, looking at old theses is a great reminder of just how dramatic the progress of physics has been-- just 81 year ago, we were completely ignorant of one of the basic constituents of atoms. Let alone the fact that neutrons and protons are themselves composite particles containing three quarks each. They didn't even know about the proton's spin, based on this reading-- they seem to be attributing the nuclear magnetic moment entirely to the mythical trapped electrons.

Other notes about this thesis:

This isn't on onionskin paper, but does feature hand-drawn graphs on graph paper: 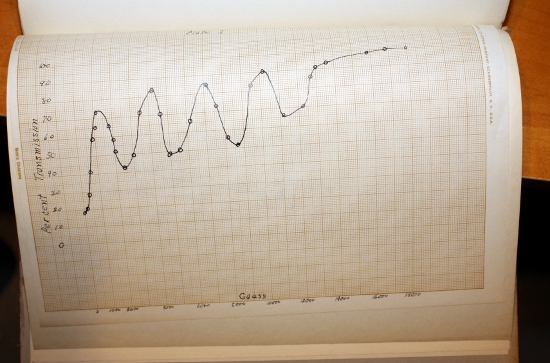 Data graph showing the transmission of light from a mercury lamp through a vapor cell.

It also has some particularly fine examples of apparatus diagrams done by a draftsman (whether Leo Scott himself or a professional employed by the college is not clear): 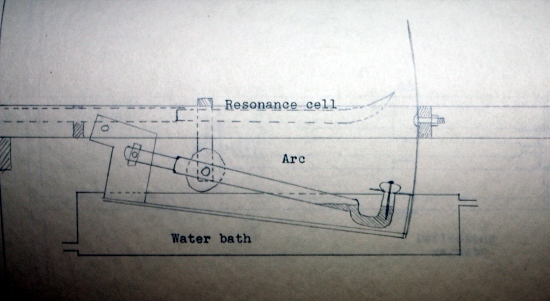 Detail of a figure showing the arrangement of the apparatus.

(The color "correction" here is a bit exaggerated, to bring out the details a bit more.) That's nice work, especially since as noted above, I don't think this is the official final draft.

There's also another great reminder of how much experimental physics used to suck, concerning the construction of a reference resistor:

The resistance was built as follows:-- A hard rubber plate about 5mm. thick by 25 mm. by 100 mm. was used. Holes were drilled in the ends and tinfoil sheets glued on for about 2cm. Brass bolts through the holes served to make contact between the leads and the tinfoil. The whole was then washed with ether, and lead pencil marks were added between the tinfoil sheets until the resistance was of the order of 1010 Ohms. The voltmeter-galvanometer method was used to measure the resistance. The resistance was placed in a glass bottle containing phosphorus pentoxid, the leads cam out through the stopper which was a sulfur plug sealed in with parafin.

That sounds like no fun at all, particularly the bits with the noxious chemicals. A resistance that large might still be custom-made these days, but I doubt it involves drawing pencil lines on rubber blocks. And that's a Good Thing.

As with others in this series of posts, I Googled the author's name, but didn't turn up anything other than an announcement of his engagement pending his graduation from Union in 1931. He presumably got a MS from this thesis, but what he did with the rest of his life I don't know.