One of the interesting things about the pile of old theses we found in the basement is the opportunity to look at things that nobody believes any more. Past installments of the Old Thesis Club have shown people fumbling toward an understanding of quantum physics via electron scattering and spectroscopy, but in both of those cases, they were working toward a correct theory. In this edition, we look at an investigation of a theory that's been wholly discredited.

The general category of the experiment isn't problematic-- it's basically a test of the equivalence principle, the idea that the gravitational mass of an object (the "m" in Newton's Law of Universal Gravitation) and the inertial mass (the "m" in Newton's second law of motion) are absolutely identical. This tells you that there's no difference between acceleration due to gravity and any other kind of acceleration, which leads to all the cool phenomena associated with general relativity. Equivalence principle tests have a long and distinguished history, right up to the present day-- the hotly contested atom interferometer experiments I wrote up back in June are basically equivalence principle tests, though people argue about what version of it they're actually testing.

In this specific experiment, though, the motivation was not to check the predictions of general relativity, but to check the claims made in support of a slightly goofy alternative. It's easiest just to quote from the introduction of the thesis:

In the year 1911 Charles F. Brush outlined to the American Association for the Advancement of Science his Kinetic Theory of Gravitation. The theory suggested experiments to him which he undertook. From his investigations with torsional bal;ances, Analytical balances, pendulums, and freely falling bodies, Brush felt that he found a minute but definite difference in the mass-weight ratio for different materials, and also for the same material under different physical conditions. For example, when he subjected certain bodies to large compressional stresses, he found small losses of weight. According to his report to the American Philosophical Society, he observed a loss of weight of 1.2 milligrams in a sample of approximately 60 grams, which is a loss of the order of 1 part in 50,000.

At Brush's request the Physics Laboratory at Union College undertook a repetition of his experiments. Under the guidance of Dr. Wold, and with the co-operation of Dr. Brush, the work was started in 1928 by two Senior Students of the college, C. Henshaw and R. Stone. They were able to observe the same effect but of a much smaller magnitude, in fact but 1 part in 400,000. The following year the work was carried on by A. E. Stafford and the author.

You can Google up copies of Brush's theories, which basically involve mysterious waves in the aether that push objects around; I'm not going to dignify the kook sites hosting them with a link. It's pretty strange stuff, and not remotely plausible.

So, I was a little uneasy about this one, for fear that it was wholeheartedly going into kook territory. It doesn't seem to be that, though-- instead, this is a very thorough and careful attempt to check an anomalous result. And in keeping with the general pattern of such things, you can see the effect getting steadily smaller, in the key (hand-drawn!) graph at the end: 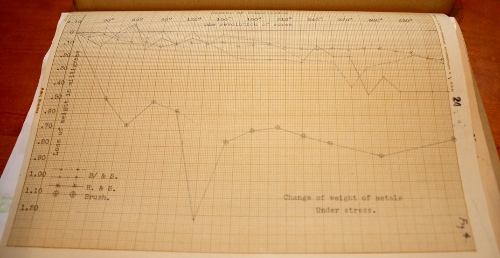 The wildly oscillating line at the bottom is data from Brush, showing a dramatic effect. The cluster of lines up above are the measurements made at Union, with the work reported in this thesis being the smoothest line with the smallest total effect. There's the usual technobabble about how the need to ship samples from Cleveland to Schenectady produces some decay of the magic treatments used to maximize the sensitivity, but this is pretty clearly a junk effect of some sort, getting progressively smaller as more careful experiments are carried out.

What's interesting about this is how simple the whole thing is. The measurements are made using a commercially made balance, hanging a test sample on one side (in a metal cylinder with a screw top that can be used to apply compression) and an equal mass of the same material on the other, and looking for a shift in the equilibrium point. Of course, there were a few modifications made:

In order to reach the sensitivity which was desired, it would have been necessary to estimate to twentieths of a millimeter division. To avoid this, a new scale was ruled, in which the divisions were half millimeters. Since the pointer end was fairly sizable, a very short length of hair was fastened to the pointer. With the aid of the telescope and the above mentioned refinements, it was readily possible to estimate the position of the hair to tenths of a division.

The balance position was measured by setting it rocking back and forth (with a period of 30-odd seconds) and measuring the turning points of the oscillation. The midway point between the two extremes was taken as the reading, and that can be converted to a change in weight.

They took a bunch of obvious precautions to avoid errors, making the sample and the counterpoise as identical in composition and shape as possible so as to avoid issues of buoyant forces, and placing the whole thing in a sealed insulating cabinet to avoid thermal shifts. There's some discussion of a crane arrangement to take the test sample on and off the hooks of the balance, and a special vise and wrench used to avoid scratching the cylinder when tightening the screw to apply compression.

What's really clever, though, is the control experiment Bigsbee devised: the explanation for the change in weight in Brush's theory is that when a sample is compressed the atoms get closer together, and this changes the degree to which it absorbs the aether waves that are supposed to cause gravity. As a check on this idea, then, they made samples of an amalgam of tellurium and mercury, which is known to expand substantially after mixing. This presumably changes the spacing between atoms, and ought to lead to a change in weight.

This experiment requires a good deal of work to ensure reasonable stability of the balance, which is described in some detail. The results of the test are inconclusive-- their first amalgam sample expanded so much it broke the glass container they had it in, messing up the test; the second showed no change over many hours; and the third showed an apparent steady loss of weight. Checks on this using the counterpoise and brass weights, though, also showed an apparent change of weight, making it "doubtful that the results of table No. 4 can be accepted as a genuine change of weight of the sample."

The thesis carefully avoids drawing any firm conclusions, and includes some reasonable speculations as to possible confounding factors. I know there is at least one more thesis from a student of Wold's on gravity measurements in the pile, so it will be interesting to see how this evolved. At least in 1932, though, it looks like good science checking up on a pretty implausible result.

Miscellaneous notes: Googling "Earle Milton Bigsbee" turns up a bunch of references to mathematical tables that he apparently edited and published. There's also a newspaper clipping reporting his election to Vice President of the University of Bridgeport, so he went on to a reasonably successful academic career.

This is another draft thesis, cheaply bound in cardboard and labeled by hand. There are hand-written corrections through the text, but it's not onionskin paper this time. It's probably a carbon copy, since a lot of the letters are kind of blurry, and there are occasional bits missing.

Small change is exquisitely measured when it rotates a small mirror. Bounce collimated light (today, a laser pointer) onto a screen 20 feet away. /_\Radians times radius. If you are near a gravitation experiment, your mass perturbs it (one exception), ditto irrigation and moving overhead moon and sun.

Euclid's 180º triangles are 2000 years rigorous, except for cartography (didn't anybody suspect a boojum?). Bolyai's triangles have fewer than to 0º or more than to 540º. Euclid is incomplete. Ya gotta look.

Is it just me or has Uncle Al steadily progressed towards greater incoherence over the years?

Back at the late Tenderbutton blog he was sufficiently lucid that one* might actually check out his links, but now he's not even grammatical.