I'm teaching Quantum Optics this term, and one of my students picked "Atom Optics" off the list of suggested paper topics. When he asked for pointers, I said "You should check out the diffraction stuff Markus Arndt's group does." And just like that, a paper from the Arndt group turns up from the Arxiv Blog...

This is apparently only recently posted to the arxiv, though the article in Physical Chemistry Chemical Physics claims to have been online since July. Since I never get tired of talking about this, let's talk about this one, too.

So, what's this one about, then? In a lot of ways, it's the same story as previous papers. They've demonstrated wave-like behavior in really big organic molecules, this time with a mass of about 10,000 amu, or about 20 million times the mass of an electron.

And this is only in Physical Chemistry Chemical Physics? How is this relegated to a journal that can't make up its mind what it's called? There's definitely an interesting sociology-of-science thing here. The first few times they did molecule-interference experiments, it was in Science, but now, it's in a lower-rank journal.

But, really, it probably belongs there, because in some sense, the really interesting part of this is the chemistry, not so much the physics. I mean, the fact that molecules of this size show wave behavior is pretty damn impressive, but on some level it's not surprising. The tricky part is finding molecules that work.

What do you mean? Well, like I said in that composite particle post, for them to be able to treat molecules as single particles with wave-like characteristics, they need the energy of the molecules to be small compared to the binding energy. But they also need these molecules to be out in a vapor, not clumped together to make a lump of goo on the bottom of their vacuum system. Which means threading a metaphorical needle, of finding big heavy things that are tightly bound enough to not fall apart but weakly interacting enough to have a reasonable vapor pressure for turning into a molecular beam.

The title makes it sound like they just checked some out of the library. Yeah, um, no. The "molecular library" in this case refers to the fact that the solution they found to this involves a source that spits out all kinds of stuff. The chemistry to make the heavy molecules produces a whole bunch of different stuff, which they call a "molecular library" because it sounds more science-y than "tube full of goo." They take this whole collection of molecules, with masses ranging from 7,000 up to 15,000 amu and bang it into their beam source, making a beam containing every type of molecule in the library.

Wait, doesn't that mess things up? No, for two reasons. One is that they use a quadrupole mass spectrometer as their detector, which lets them only look at particles of a single mass. They can select which one of the umpteen different molecules in the system they want to look at, and see the interference signal for just those.

More importantly, the flux in their source, even with a bunch of different molecule types coming out, is low enough that there's basically no chance of two molecules being in the interferometer at the same time and interacting with each other to screw up the pattern. They calculate that the particles are spaced by about a third of a millimeter, which is huge for this kind of work.

But if the particles are so far apart, how do they see interference? The key is that each particle interferes with itself-- part of the wavefunction passes through each of the many slits in the diffraction grating, and all those pieces come back together to make the interference pattern. It's not that a molecule going through one slit overlaps and interferes with a different molecule passing through another slit-- indeed, given the huge floppy nature of the molecules they're using, that would be basically impossible to see. Interference of waves from two different sources requires the things doing the waving to be absolutely indistinguishable, and there are so many different configurations of rotation and vibration possible that no two molecules are likely to be in the same state to interfere cleanly.

But each molecule can interfere with itself, by definition, and this allows them to build up an interference pattern. Slowly, a molecule at a time.

And how do they make these interfere? The same way they did in the past experiments, with a "Kapitza-Dirac-Talbot-Lau Interferometer," which consists of three diffraction gratings. The first is a physical grating cut from silicon nitride, which spreads the wavefunction out so it spans several "slits" of the second "grating," which is a standing wave laser. This is the "Kaptiza-Dirac" part of the name, as those two came up with a scheme to deflect electrons with light that is basically identical to what happens here: the light beam channels the atoms in a way that functions exactly like a grating, but without blocking any of them.

The third grating is another physical one, cut from silicon nitride, and uses the Talbot effect to produce a signal. At some short-ish distance from an array of slits, the "Talbot length," the waves passing through will come together to form an exact copy of the slit pattern again. They use the third grating as a mask to pick this up: when it's aligned exactly with the light wave, all of the molecules in the pattern will pass through open slits. When it's shifted by half the distance between slits, all the molecules hit the grating and get stuck, and nothing makes it to the detector.

Is this where you throw up a data graph showing the pattern? Absolutely. Here you go: 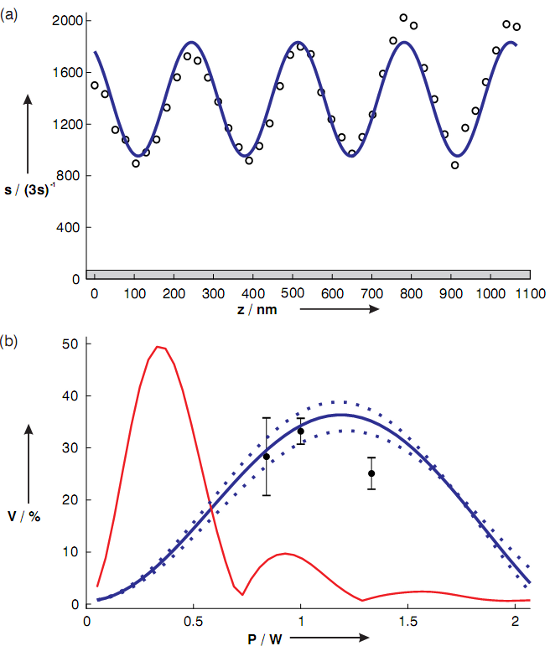 Fig 3 from the arxiv preprint, showing the interference pattern and measured contrast.

The top graph shows the number of molecules of the appropriate weight detected after the interferometer as a function of the position of that third grating. You can clearly see a sinusoidal interference pattern.

Um, dude, there are only three points... Yeah, but they're pretty clearly not in agreement with the classical version of things. They explain why in the paper:

The experiment clearly excludes this classical picture. Since the amount of precious molecular material and thermal degradation processes in the source limited the measurement time we performed our experiments only in the parameter regime that maximizes the fringe visibility, to show the clear difference between the quantum and classical contrast. The experimental fringe visibility reproduces well the maximally expected quantum contrast.

Do you think a Tolkien fan won a bet by working that "precious" in there? Probably not, given that they're Austrian, but you never can tell.

So, anyway, the lack of more comprehensive data is just another matter of chemistry? Yeah, pretty much. The stuff is evidently annoying enough to make that they didn't have a whole lot of it, and the process of heating it into the beam breaks it down over time.

So, are they ever going to interfere, like, living cells? I'm sure they want to, but again, it all comes down to chemistry. They'll presumably keep plugging away at this, and when they find another way to make even bigger molecules that they can get into a reasonable beam without breaking into a zillion pieces, they'll be back with clear evidence that those, too, behave like waves.

The published version of the paper is open access, so anyone interested in reading the final version can do so here: http://pubs.rsc.org/en/Content/ArticleLanding/2013/CP/c3cp51500a

Suppose we did that with small, volatile, rigid molecule camphor. Use it optically resolved (from a camphor tree) or perhaps 2:1 enantiomers (doped racemic synthetic). Space the molecules along their path or densify the stream. Will there be anomalous racemization as the wavefunction recombines or mixes?

One could argue that in a Rabi vacuum oscillation cavity, with no random jingle-jangle to decohere a molecule's extended wavefunction, it could lose its structural way. What fun!

Yeah, when are they going to get an interference pattern from a beam of dead cats?

Thanks for a really interesting post. More ideas for my Quantum Chemistry lectures next semester!