Back in the fall, I did a bunch of write-ups of old Master's theses that we found when clearing some space in a storage room. I got away from this because I was busy working on the book, but I have a few more that I pulled out to look at, and since all the other topics sucking up Internet energy at the moment are stupid or depressing, it seems like a good time to get back to these.

So, this is a thesis from 1934 by a fellow named Thomas Dietz, a combination of names that is common enough to make him less Google-able than you might want. This does seem to have been moderately significant work, in that something that sounds like the same experiment was published in a radiology journal in 1935.

Unlike the previous entries in the series, I really don't know much of anything about the modern state of the field. I pulled this out because the combination of age and subject matter made me curious-- these days, if you were going to talk about the interaction between radiation and bacteria, you would naturally discuss it in terms of genetics, but what could they have done with this in 1934?

To some degree, this thesis ends up feeling a little like the classic student grumble that science was a lot easier in the old days. The procedure here is really basic: mix up two tubes of bacteria and growth medium, and when they seem to be starting to grow, blast one with x-rays and keep the other as a control. Then monitor the growth over a period of a couple of hours and see what happens.

They did seem to have a slightly clearer idea of what to expect than you might've guessed, though, in that they were specifically investigating a previously known increase in the volume of the bacteria (they're using x-rays at a low enough dose that they don't just fry everything). This thesis reports on a series of experiments to check this increase via a new detection method, looking at the optical density of the tubes over time at particular wavelengths. This shows more or less what they expect, namely an increase in the volume of the cells, and allows a meticulous measurement of that change from some simple mathematical models (making a lot of use of logarithms, in ways that wouldn't necessarily occur to people today, who would keep the numbers as is, and just have a computer plot them on a log scale...).

The main thing that comes through in this is that Dietz was a really careful experimenter, because every detail is discussed. And check out the meticulously hand-inked data graphs, complete with needlessly complex symbols: 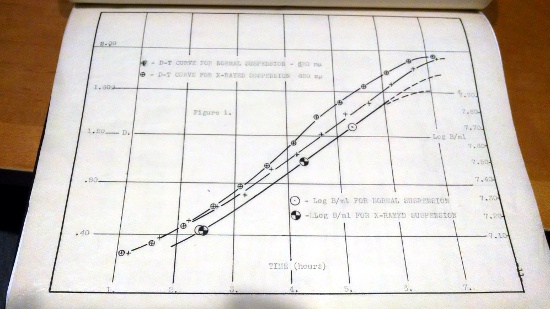 A data graph comparing the growth of irradiated and control samples for one run of the experiment.

Beyond that, this rapidly exceeds my knowledge of biology, and I can't really evaluate this in detail. The proposed explanation for the swelling is increased absorption of water into the cells, possibly due to something with the membrane, probably heating on a microscopic scale due to absorption of x-rays. Which, um, sure. Sounds plausible. I guess?

Given that, I probably wouldn't've bothered to write this up were it not for three things: 1) The way cool graphs and the photographs pasted into the back (as seen in the "featured image" up top-- they're glossy photo prints glued onto paper and bound in with the rest of the pages). 2) This disclaimer at the end of one of the appendices:

The general destructive effect of x- and ultraviolet waves are based upon a non-specific reaction which is further proof of the point heat theory. The Physics of such a theory is in the field of Quantum Mechanics and is not available for this paper.

That's a really nice way of saying "Hell if I know..."

And, 3) the preface, which almost counts as two items. The first paragraph is surprisingly poetic:

For a year or more previous to the undertaking of this investigation I experienced the urge to pursue a project in the field of Biophysics. The field was comparatively new and the idea intrigued me, not only because it permitted the use of my past training in Physics, but also because each day of such pursuit would bring intimate contact with the ever present mystery of Life in its many variations.

I like that quite a bit. The second paragraph begins by saying that the initial experiments were started at Ellis Hospital, and ends with this slightly cryptic note:

The organisms, Bacillus typhosas and Bacillus dysenteriae were studied but it was soon found that the investigation was being diverted from fundamental concepts. For this reason the work was continued along more basic principles in the Physics Laboratory of Union College.

So, two things about this: a) They started this using infectious diseases. Safety standards in 1934 clearly weren't what they are now... And, b) this is so carefully worded that man, there has to be a good story behind whatever happened to cause the move. But unless Mr. Dietz or one of his descendants turns up to share it, we'll just never know.

Anyway, there's a very brief glimpse of the state of biophysics in its very early days. I had pulled a couple more bio-related theses as well, from later years, so maybe I'll check in on those to see how this story developed from here.