“According to the special theory of relativity nothing can travel faster than light, so that if light cannot escape, nothing else can either. The result would be a black hole: a region of space-time from which it is not possible to escape to infinity.” -Stephen Hawking

The idea of a black hole, of a region of space where there's so much matter-and-energy that not even light can escape from it, has been around for hundreds of years. 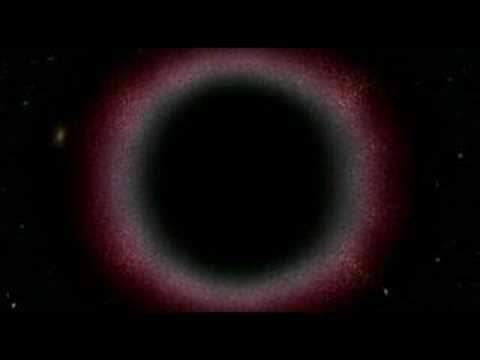 Yet despite this constraint, the fact that any form of energy entering it is forbidden from ever leaving, these objects are not invisible. Rather, there are a number of ways they reveal themselves to us practically, as well as -- in principle -- theoretically, in ways we may someday detect in the not-too-distant future. 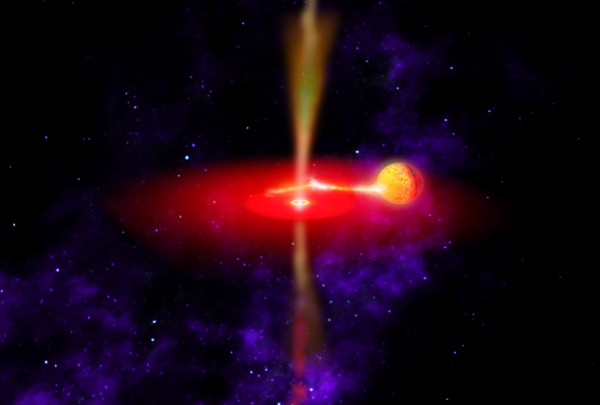 Go read the whole story on how we "see" black holes.

Trivia Thursday:
We have a new Secretary of defence Ashton Carter, know what his degree is in?
Yep physics

Interesting stuff could come of this, a physicist dream here having the US military's budget and research power at your disposal is quite tantalizing I would think.

"This radiation is maddeningly cold; the black hole at the center of our Milky Way would emit Hawking radiation of a temperature measured in the femtoKelvin range"

Is that the temperature of the radiation measured near the horizon, or is it the redshifted temperature seen by a distant observer?

Thanks again, love your blog!

Is a black hole really possible with classical Newtonian gravity?
The way I see it is for any finite radius/mass the gravitational potential is finite, a beam of light trying to escape redshifts, but the redder photons are still traveling at lightspeed, so the redshift factor should be finite. Now with GR that isn't the case.

In any practical sense Hawking radiation is impossibly weak. Stray radiation from starlight, and the cosmic background radiation hitting the event horizon (and being absorbed) would be many orders of magnitude greater than the Hawking radiation. So we would have to wait a gazillion years until the BH actually stopped gaining mass.

Just for info, the interesting GIF by the Keck/UCLA Galactic Center Group now goes for 3+ more years to 2013.7

@Omega Centauri #3: The idea of a "Newtonian black hole" dates from the late 18th Century. As I recall, it was derived under the assumption that light was "corpuscular" and the little particles had some (hitherto unknown) mass.

The Wikipedia article has a nice quote from John Michell, basically deriving the idea that a star with 500 times solar mass (I think), would have an escape velocity greater than 'c', and therefore light couldn't escape from it.

With the acceptance of the wave nature of light, that idea was forgotten.

that would be in local reference frame around black hole.

According to current theory, did matter and energy expand faster than the speed of light in the first instants of the Big Bang?

Its about time we discovered what makes black holes tick ;-)

#7, neither. The metric of space expanded.

The metric of space? No. Space itself, and everything in it, expanded faster than the speed of light.

Don't "ask a question" and then pretend that you know better than the answer given to you then STILL hope to be taken as "just asking a question" you religious nutbar.

Did “space” exist before the Big Bang that expanded it? No.

Then, something has moved/expanded faster than the speed of light in the history of the universe.

did matter and energy expand faster than the speed of light in the first instants of the Big Bang?

Was that BEFORE you "knew":

Did “space” exist before the Big Bang that expanded it? No.

Then, something has moved/expanded faster than the speed of light in the history of the universe.

Or did you learn that somewhere between this morning and this evening?

Or was it that your question was merely to pretend you have a purpose and reason to be here and "learn science" whilst having absolutely no intention of doing so in the least?

Awesome, I wonder if that is all there is about the universe though: planets, starts, nebula and black-holes. I still wonder though, what will happen if the earth got pulled to one of the black-holes and how come these black holes are just there? Have we actually seen things get pulled in before? There is clearly a lot we humans do not know about the universe.
-u15159982

So it's not "seeing a black hole" but detecting the radiation from the whirling disk of material surrounding it. Wouldn't the extreme gravity near the event horizon retard the apparent rate of everything that happens there, so we could not even watch things fall in? The disk material should seem to slow down and never get to the horizon. Another question worrying me for quite awhile now - how does gravity get out of a black hole???

The larger the black hole, the less the effect, Gary.

Ok, thanks for that explanation Gary, I still cannot stop thinking that there is so much other things in the universe that we might have overlooked...or not 'discovered'. For example, if I may ask, is the Universe endless? If it is then there is definitely a possibility. If not, then we would need larger cosmic microscopes to see its boundaries, if there are.