Problems with the Pipeline

Via Curt Rice (or, more precisely, somebody on Twitter who posted a link to that, but I didn't note who) there's a new study in Frontiers in Psychology of the STEM "pipeline", looking at the history of gender disparities in STEM degrees. You can spin this one of two ways, the optimistic one being "Women now continue on from bachelors degrees to Ph.D.'s at the same rate as men!" and the pessimistic one being, well, Rice's post.

The accurate description, as is often the case in social science, "This stuff is really messy and confusing." Rather than being a set of nice straight pipes going from undergraduate degrees to graduate school to a Ph.D., the academic system is some tangled mess of dripping pipes out of a Dr. Seuss cartoon.

While it doesn't provide a lot of answers, the paper does at least provide a bunch of information. The key idea here is to use a set of surveys of college graduates that stretch back into the 1970's and use that retrospective data to look at how the earning of degrees has changed over time for men and women. The key measure they use is a "persistence rate," which is the fraction of students who earned an undergraduate degree in a science field who went on to earn a Ph.D. in that field by 2010, which is where their data stop. They calculate these rates for five-year cohorts (stopping in 2000 to allow sufficient time for graduates to earn a Ph.D.. The rates for men and women in all STEM fields groups together are shown in the "featured image" up top, which I'll reproduce here for those reading via RSS: 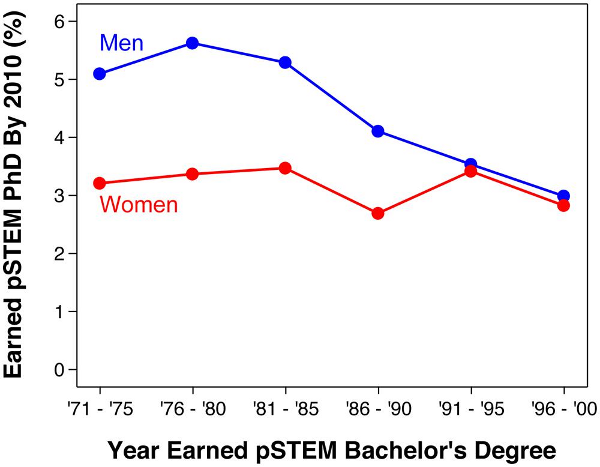 Fraction of students with an undergraduate STEM degree who go on to geta Ph.D. in the same field. From the paper discussed in the post.

As you can see, there's initially a big gap, but the overall rates for men and women are now basically the same. Of course, as Rice noted in the post that kicked this off, this was accomplished not by boosting the persistence rate for women, but by lowering it for men, which seems less like something to cheer about...

They also break this out by subfield of degree, which is where things get messy: 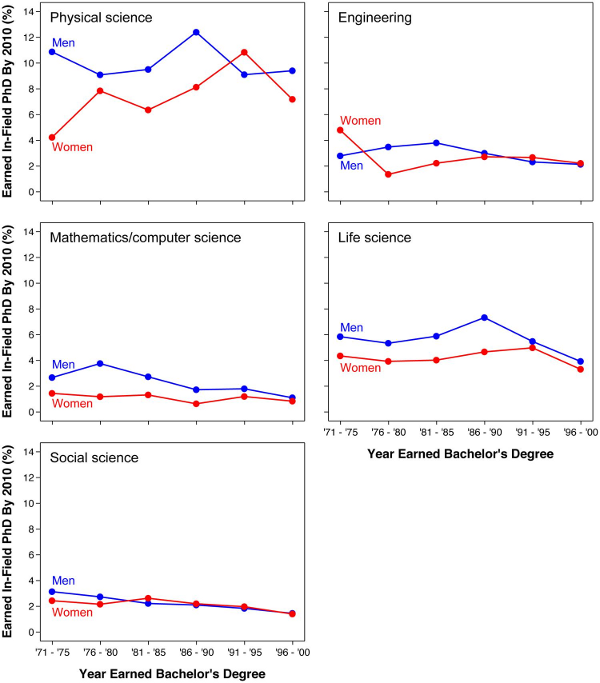 Fraction of students with undergrad degrees in various STEM subfields who go on to earn Ph.D.'s in the same field. From the paper discussed in the post.

These plots are a lot noisier, because the sample sizes are necessarily smaller, and unfortunately, the consistent scaling across plots sort of obscures some of the data in that figure; happily, they have a spiffy interactive website where you can make your own graphs. What you see, though, is that the story isn't really consistent across fields-- in physics, the persistence rate for men is roughly constant, while it creeps up for women, while in life sciences, the persistence rates for both men and women crater after the 86-90 cohort, the men dropping somewhat faster.

This pattern is also sort of difficult to explain, as they discuss at some length. Most of the obvious explanations for how gender gaps might arise in the persistence rate would seem to suggest trends that would go in different directions than what they actually see. It's also a little hard to match studies of bias within subfields to the persistence rates observed.

(Also, all three of those percentages definitely ought to be higher than they are. But from the BS/BA level on, we're at least not making things spectacularly worse.)

Given the confusing nature of the data, their conclusions are basically a punt: this needs more study. They do at least identify a couple of areas that ought to be targeted in future studies of this stage of the process. They don't give it as much emphasis, but I would also add that this is another piece showing that it's critically important to study what's happening before college, because that seems to be where the biggest potential gains lie.

"which I’ll reproduce here for those reading via RSS:"

I disagree with the notion that a higher fraction of undergraduate X students getting a PhD in X is necessarily a good trend.