Today's photo-of-the-day is of the point that gives my home town of Whitney Point its name- the Tioughnioga (left) and Otselic (right) rivers come together here, providing as good a reason as any to locate a town here back in the late 1700's. This was originally named "Patterson's Point"; Whitney was an innkeeper who ran a mail drop, and people inevitably got sick of addressing things to "Whitney's Inn at Patterson's Point," so the name got condensed.

There's a dam on the Otselic now (for values of "now" dating back to before WWII-- it was started as a New Deal labor project), and my parents' house is very close to the resulting lake. In summer, the lake gets a little scummy, though, so my dad has been bringing their yellow Lab, Bodie, down to the river to fetch sticks in slightly cleaner water. As you can see in the photo. 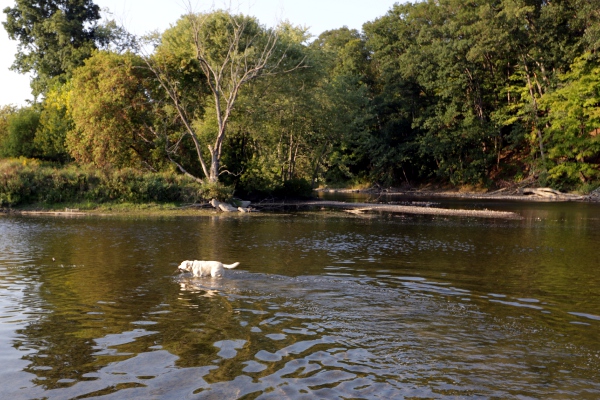 The junction of the Tioughnioga and Otselic rivers, with Bodie the yellow Lab for scale.

We came down with the kids, and did a bunch of splashing and wading along with the requisite throwing of sticks. I took some artsier photos of just the point-- that dead tree makes a nice contrast with the dark vegetation in back from a slightly different angle-- but Bodie's a good dog, and deserves to make the occasional appearance here.

(Bodie also makes a few appearances in examples and illustrations in How to Teach Relativity to Your Dog, in cartoon form.)

Are there septic tanks feeding nutrients to that impounded lake? Late summer blooms are pretty common in small lakes surrounded by summer homes.

It's a rural area, lots of dairy farms. Any septic tank leakage would be dwarfed by agricultural runoff.