SteelyKid's elementary school had their annual open house tonight, and they tried something different with it this year. Rather than having prepared presentations in the classrooms, they had the kids lead a "tour" for their parents-- she got a map and a "bingo" card, and then led us to her classroom, the cafeteria, the library, and various other spots to say hi to the various teachers. It was very cute, though maybe not all that informative.

Her second-grade class did a thing where each kid colored an owl and wrote three clues on it. The whole collection of owls were left out on a table, and parents were asked to guess which one belonged to their kid. So, of course, I'm using SteelyKid's owl for the photo-a-day: 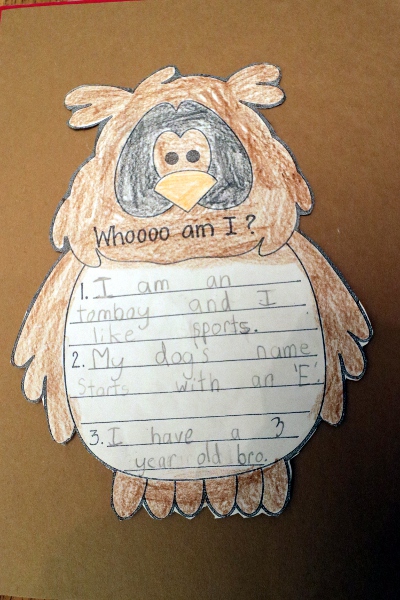 SteelyKid's clues for the "guess which kid wrote this" owl at her school's open house.

Her clues, in case you can't read them:

Even though I don't think I've heard her use to word "tomboy" before, this wasn't exactly difficult to figure out. Sure was cute, though.

SteelyKid's second-grade class is doing a "Zoom Time" thing where the kids make short presentations to the class about one of their interests. It's basically an expanded show-and-tell, with fifteen minutes for talking, and five for "questions and compliments." She, of course, decided to talk about…

Another week, another batch of photos. This is coming on Friday rather than the weekend because I'm going to be incommunicado for most of the next week, and have some free time now. 284/366: LIGO, Eat Your Heart Out Gravity wave clouds above our house. Sure, LIGO detected gravitational waves…
Advertisment