Weekends around here tend to be ridiculously busy, so you get a cell-phone photo again. But with a twist-- over in Twitter-land, Frank Noschese mentioned a smartphone app called Motion Shot that takes short video clips and processes them to provide multiple images of some moving object. This is, of course, basically irresistible for a physicist.

SteelyKid was invited to a classmate's birthday party today, held at a trampoline park, and I shot some video of SteelyKid bouncing around. Which Motion Shot turned into this image: 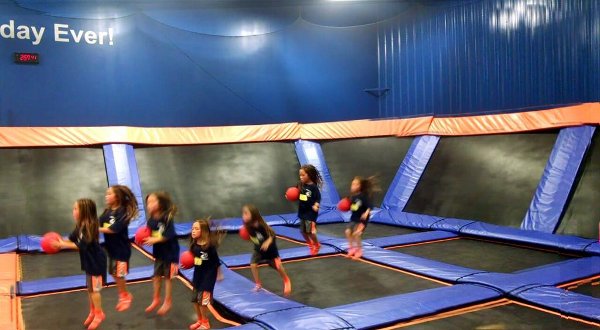 Multiple images of SteelyKid bouncing at the trampoline park. Composite image made with Motion Shot.

It's a fun little app, if you like this sort of thing. It chokes a bit if there's too much camera shake, or the object is moving too rapidly-- a couple of other attempts at the party just came out as visual gibberish. But it's a great testament to the increase in video processing power over the years-- a free Android phone app can instantly generate pictures that would've taken a huge amount of effort not all that long ago.

And that's you're quickie photo-of-the-day. I'm going to go fall over, now.