Over the last few years, I've developed a routine of working at Starbucks in the early morning, between the bus picking SteelyKid up (at 7:30-ish, ugh) and when I need to be on campus. Now that I'm on sabbatical and don't need to go to campus every day, I'm still going to Starbucks, just extending that a little later.

So it only makes sense to include a shot of my "office" at Starbucks in this photo-a-day series: 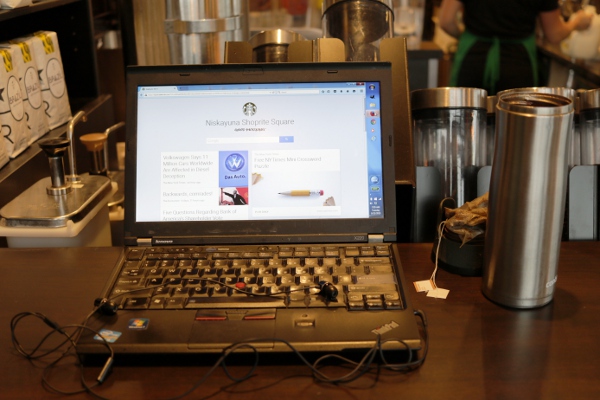 My usual spot in the Niskayuna Starbucks.

This is at one corner of the bar; the canisters behind the laptop are beans for the clover machine, out of frame to the right. This was shot with the new 24mm pancake lens, leaning back in my chair a bit, which confirms to me that this is a pretty reasonable lens for much of what I do with the camera.

I stake this spot out pretty much every morning. On the rare occasions when someone beats me to it, the staff make jokes about it. But, hey, it's been a very productive routine for me.

During my sabbatical last year, I decided to try to do a photo-a-day project, taking and sharing at least one good picture a day of something or another. The strict photo-a-day format fell victim to my general busy-ness and disorganization, but I did eventually complete the whole thing. In the…

For the 42nd installment of this photo-a-day thing, it seems appropriate to try to do some SCIENCE! to get an Answer. So, here's a composite of a bunch of images I took yesterday in order to investigate something: Graph paper shot with several different lenses, to look for distortion of the images…

One of my recurring half-serious grumbles about this photo-a-day business is that our neighborhood doesn't offer a clear view of the horizon, making it impossible to get nice sunset pictures. On sunday afternoons, though, we have a babysitter come stay with the kids for a while so Kate and I can do…

And now, the photo-a-day project straggles in to the finish line, with a final five photos dominated by the kids: 362/366: Kid Art I A set of figures drawn by The Pip at day care over the summer. 363/366: Kid Art II Awesome owl drawing by SteelyKid. One of the official end of summer…
Advertisment