One of the few problems with the new camera is that the Canon software that talks to it only runs on my laptop, not my home desktop. This is an issue partly because the laptop has less disk space (I got it with the biggest SSD available a few years ago, which is small compared to the spinny-disk drives in the desktop), but a bigger issue for image processing is the display, which shifts colors dramatically as you change the viewing angle. This isn't a big issue for daylight photos of the kids, where the camera does pretty well already and the GIMP auto-level tool handles the few color issues that creep in. In low light, though, it's next to impossible to figure out what the image really looks like.

And today's photo of the day is a very low-light image: 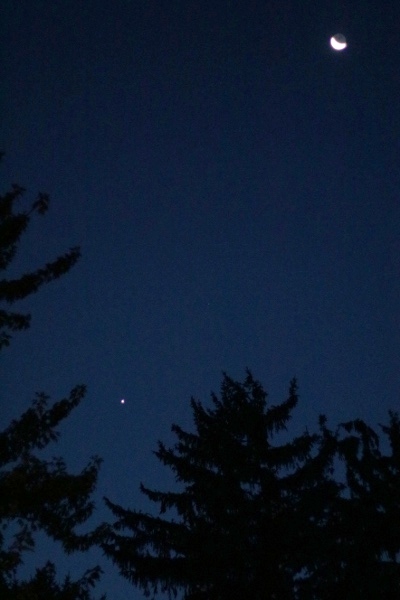 The Moon and Venus from the back yard of Chateau Steelypips

That's the crescent Moon and Venus just above some of the big trees behind our yard. These two have been creeping closer together over the last few days, something I've noticed because my morning walk with Emmy is now starting before sunrise. They'll probably be even closer tomorrow, and the Moon smaller, but the weather around here at this time of year is not terribly reliable, and I figured I should take this shot while I could. If I get a better version tomorrow, well, I'll see about cropping it in a way that illustrates the relative motion nicely.

This was taken hand-held, with the f/1.8 50mm lens, and the exposure time cranked down pretty short; the automatic routine on the camera wanted it to be long enough that everything got blurred. I could probably get a better image with the tripod, but I was being lazy and the dog was waiting for her walk.

The sky in the original image appears quite a bit darker than it did live (because our eyes are rather non-linear in their response to light), and tweaking it in GIMP was a huge pain on the laptop. This is still on the too-dark side (looking at it on the desktop monitor), but it looks nice, so I decided to quite while I was ahead.