This is basically the shot I was trying to get yesterday when I ended up settling for an evil squirrel: a leaf in mid-fall. 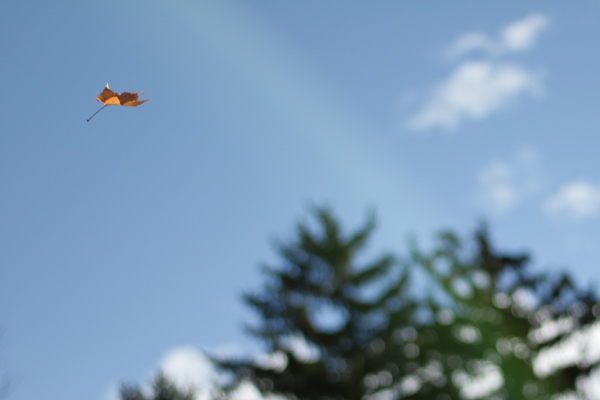 This is, of course, damnably difficult to get, as it's impossible to guess when a specific leaf will drop, and if you throw them up into the air, they don't stay airborne long enough to bring the camera up and focus it. And, you know, I could recruit somebody to toss leaves in the air for me, but I'm not sure that would make me feel any less a dumbass than standing in the yard with my camera staring up at the maple over the driveway.

It's not quite perfect-- there's a lens-flare sort of thing arcing across the middle, because the Sun is just out of the frame to the upper right. But it's pretty close, and I got it without cheating, so that feels good.

(Of course, later in the day, I was out in the yard with SteelyKid and The Pip, flinging rakefuls of leaves up into the air so they could run around in mini leaf tornados, which would've been a cool shot, too...)

Very nice. And I think the lens flare adds a nice touch.