On Sports Injury Rates, or Today in Why I'm Glad I'm Not a Social Scientist

The topic of sports injuries is unavoidable these days-- the sports radio shows I listen to in the car probably spend an hour a week bemoaning the toll playing football takes on kids. Never a publication to shy away from topics that bring easy clicks, Vox weighs in with The Most Dangerous High School Sports in One Chart. You can go over there to look at their specific chart, which is drawn from a medical study of cheerleading; I don't find the general ordering of things all that surprising.

There was, however, one aspect of this that I found sort of surprising, namely the difference between rates for girls' and boys' versions of the same sports. The chart Vox shows has girls' soccer as the second-most dangerous high school sport in America, but boys' soccer is all the way down in ninth place. And this pattern is consistent. So I copied their data and used it to make a bar graph of my own to highlight that: 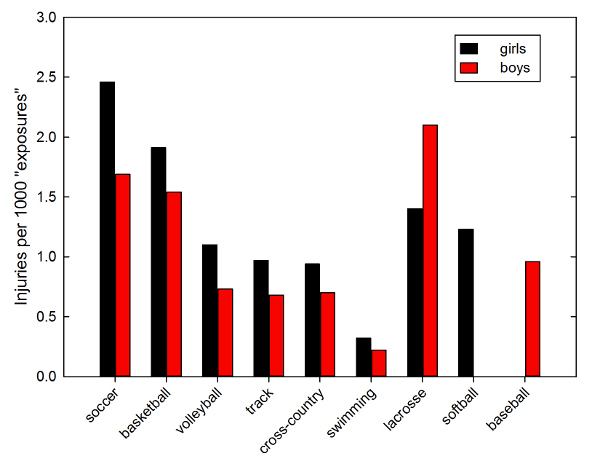 The bars here are comparing injury rates for sports that are equivalent, or at least analogous-- I tacked softball and baseball on at the end as approximately the same game, though each is played only by a single sex. The only sport for which the injury rate is higher for boys is lacrosse, and my extremely limited understanding is that the rules are rather different between the two, with much less contact allowed in the girls' game.

Excluding lacrosse, softball, and baseball, the average ratio of girls' injury rate to boys' injury rate is 1.4+/-0.1. So female high-school athletes playing a given game are roughly 40% more likely to suffer an injury ("defined as anything that required the attention of a physician or athletic trainer, or kept the athlete off the field for at least one day" from Vox) than their male classmates playing the exact same game.

It's a striking correlation, but what's the causation? Well, this is the "I'm glad I'm not a social scientist" part, because as with any system involving more than about two atoms, it's a hopeless muddle. Are girls more fragile than boys? More likely to report injury or less likely to try to play through pain? More likely to have their injuries treated as serious enough to count toward this statistic by coaches, athletic trainers, and sports-injury researchers? Probably all of those, to some degree.

I considered trying to bend this into a "Football Physics" post over at Forbes. But while it would be nearly as good clickbait there as at Vox, I would feel some obligation to try and draw a sensible conclusion or connect this to some sort of policy recommendation. And, you know, I'm on vacation in Florida (though currently taking a vacation from vacation-with-kids to do a bit of Internet writing).

So instead I'll throw the graph up here, say "Huh. That's odd," and return to thinking about the simple interactions of small numbers of frictionless spheres.

Huh. I LOVE systems with lots of variables, because they make life interesting.

Differences in reporting rates sounds like a very plausible explanation. There may also be biological reasons. Trouble is, this data provides exactly zero evidence to figure it out. You need to dig into the actual records. What kinds of injuries? How bad?

If you find that most of the difference is due to a higher rate of minor injuries in girls, while serious or non-ignorable injuries occur at similar rates, then it's probably a reporting issue. If you see specific injuries that appear more commonly in girls, it may be biological.

Here's another theory for you. May be total nonsense, but I'm putting it out there. Some kids like to play hard, push the limits, get a little violent, etc. The boys who like that gravitate to football, but the girls don't have that outlet, so they're pushing the limits in sports that draw less aggressive boys.

You should have included cheerleading. Although VOX didn't provide the breakdown, the abstract of the linked article did: 1.33 boys and 0.69 girls. (Read your cited artcle, but NOT while on vacation!) That is a huge difference on your chart, making boys cheerleading more dangerous than baseball.

Because I accept most of your reasons for the reported differences, that must mean that boys cheerleading is really really dangerous. But that isn't surprising, because it is essentially gymnastics and many schools abandoned gymnastics for insurance reasons.

I remember reading once that girls were more susceptible to ACL tears. This risk can be partially mitigated by strengthening the appropriate muscles. I suspect a mixture of culture and genes, might be responsible here. Also learning how to fall (and how not to fall). I fear that is rarely taught because of liability concerns.

I can imagine CCs statistics which show mens cheerleading as being especially risky. Here there is substantial difference in the physical roles, with the boys frequently lifting/supporting the girls.

I wonder if the cheerleading issue isn't that they're counting all-girl cheerleading squads that are really just leading cheers and not doing anything all that dramatic, and thus incur little risk. The squads that include boys are more likely to be the ones doing big showy competitions in addition to cheering at games for other teams, which involves more high tosses and tall pyramids and so on, and those lead to more injuries.

This is probably answered in the article that I haven't read. But, again: vacation.

One metric on the Lacrosse issue is that boys wear full helmets and girls just have eyeguards. This link suggests that body checking is not allowed in Womens Lacrosse http://www.lacrosse.com/womens-lacrosse/
It also turns out that in womens lacrosse stick checks are allowed away from the head only.
So the boy's game is significantly more physical players wear both helmets and shoulder pads.

The explanation I got from our gymnastic teacher for cheerleading injuries was that many squads have coaches who are not trained as coaches. Many are just former cheerleaders, if that much, and therefore are not aware of dangers inherent in certain moves, etc. I wonder if that is true of other girl's sports, especially in schools where money is tight.

What about field hockey? In my mind that always had the reputation as the sport that drew the girls who most liked to play hard.

As Omega says in #3, ACL tears among young soccer players are very common, especially among females. Also I've heard that the bone structure softens enough for females around 10-16, that a sudden stress may tear away the part of the bone where the ligaments attach, so while strengthening muscles is ay good idea, it should not be taken to extremes.