I'm back after the traditional family holiday and a less traditional trip to Charleston, SC for the Renaissance Weekend meeting. Which means things will start to return to what passes for normal around here, and that means it's time to get caught up on photo-a-day pictures...

What with one thing and another, there was one day in December when I didn't take a single picture, not even a crappy cell-phone snapshot. Not sure how that happened. I'll fill it in at some point with an extra from a day when I got multiple good images, but this catch-up post will be one short of the actual calendar span covered.

We were really late getting our Christmas tree this year, because the annual trip to Florida was a bit later than past years. But we did get one from the slim picking left at the tree lot, and here it is: 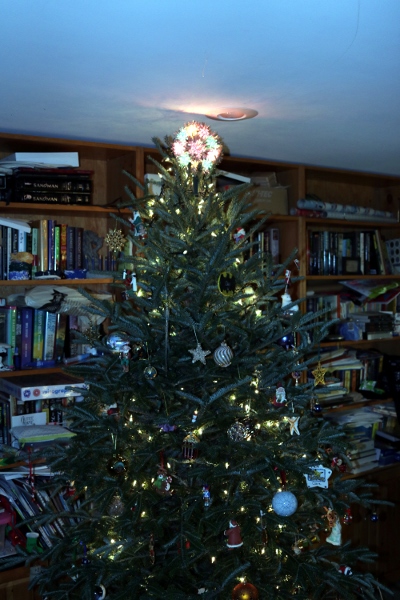 The missing day is between these two-- on Sunday the 20th, I managed not to take any photos. Not sure how. On the 21st, I went down to NYC to visit my friend Andy who was in from the West Coast, and while I didn't take my good camera, I did take a couple of shots with my phone on the way: 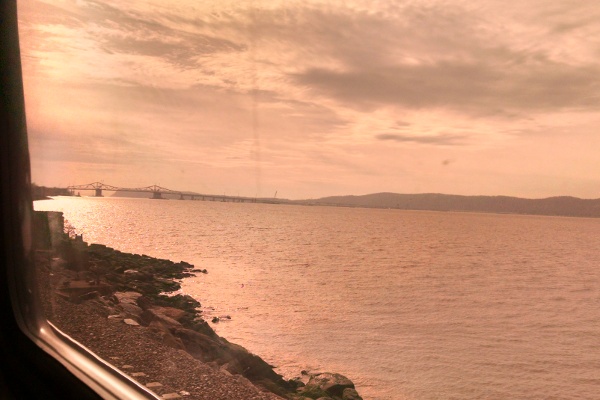 View out the window of the Amtrak train coming up on the Tappan Zee Bridge.

The sepia effect here isn't a crappy electronic filter effect, but a real physical filter, namely the tinted windows on the Amtrak train. You take what you can get.

A couple of years ago, my parents got a nifty wooden Advent calendar for the kids, with doors you open to reveal little gifts and whatnot. Here it is, near the end of the countdown: 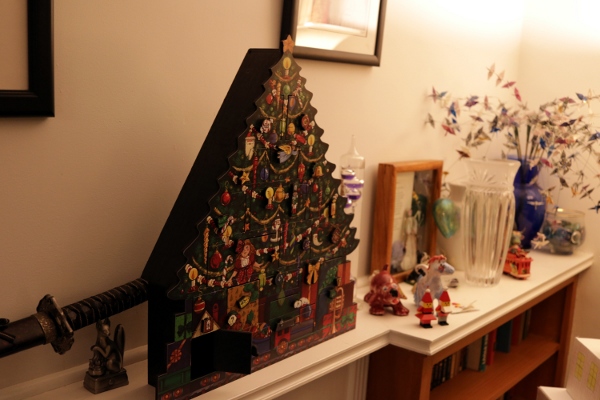 One of the things about getting up early enough to get SteelyKid ready for school is that I've seen a lot of fog in the last couple of years. Which is really pretty, but damnably difficult to photograph-- mostly it just looks like you screwed up a camera setting somehow. Here's one of my better attempts: 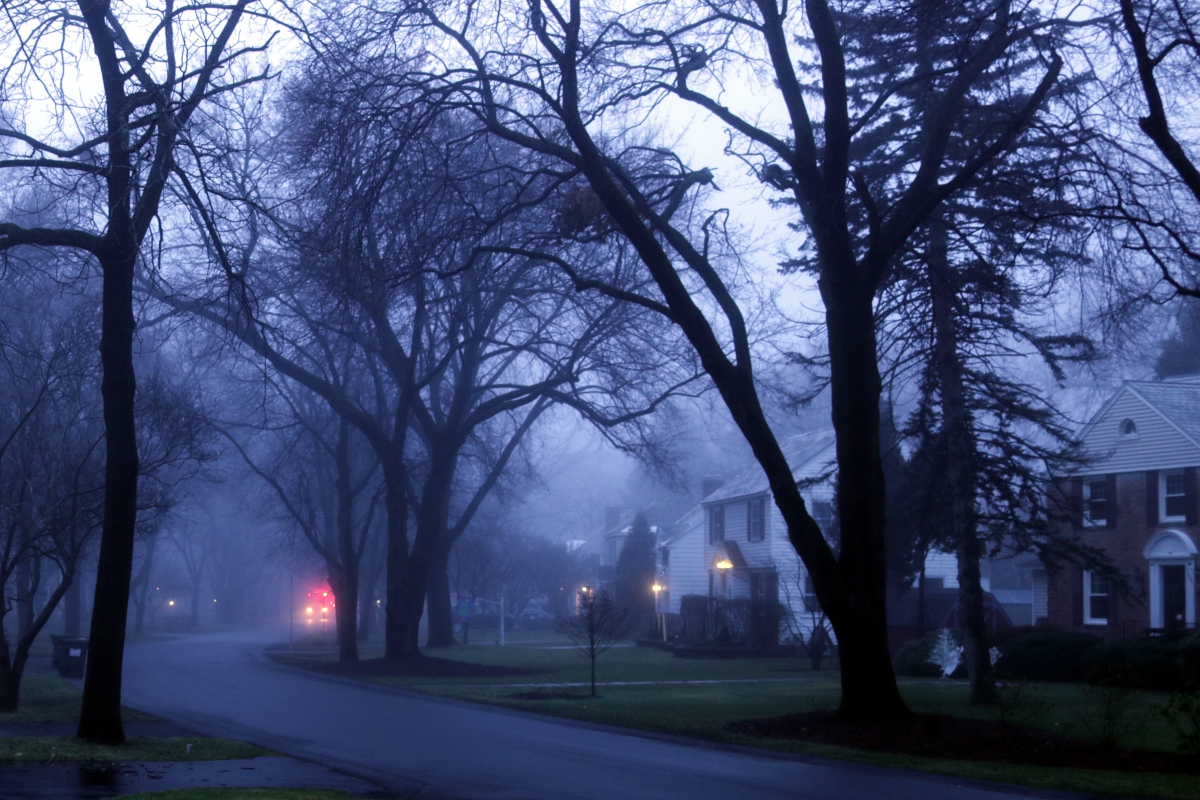 SteelyKid's bus on a foggy morning.

I actually took this because I needed an illustration for a silly Christmas post at Forbes about Rayleigh scattering, but it serves well as a photo of the day, too.

Every Christmas Eve, we get together with my dad's side of the family for a traditional Polish celebration, usually at my Uncle John's house. This year, it was absurdly warm-- I wore a short-sleeved shirt to the party-- and after dinner, the kids took their rampaging outside. Where there was a full(ish) moon and some high thin clouds: 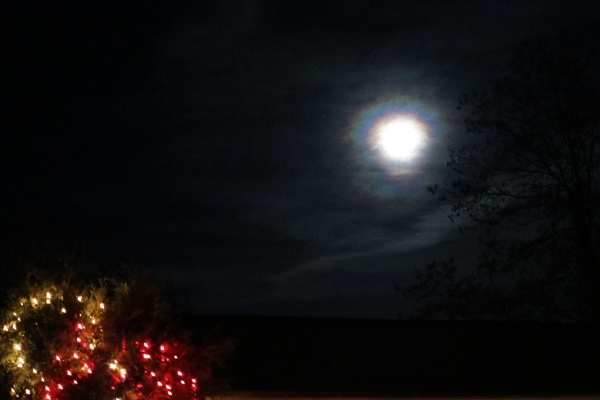 The moon on Christmas Eve.

Note the faint colors in the halo around the moon. Optical physics is cool.

Christmas morning, of course, there were many presents opened, but as I've said many times, I try to avoid having this be the Cute Kid Photo of the Day, so here's one of the few photos that doesn't involve SteelyKid or The Pip: 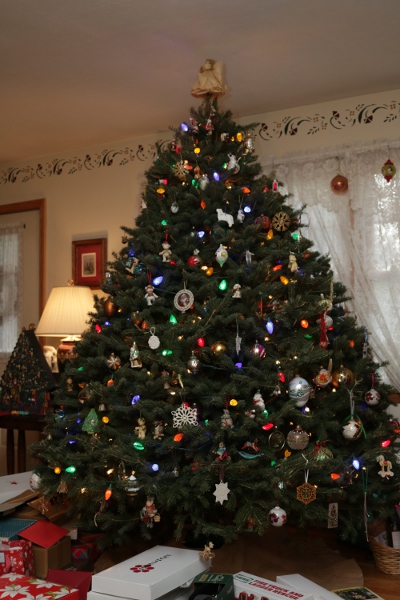 The Christmas tree at my parents' house.

I took this in part to test out my spiffy new external flash unit (replacing an old one that got broken a while back), which lets me do indirect flash easily and thus reduce the amount of screwing around with GIMP I need to do.

SteelyKid has long been a big fan of Lego sets, and in the last year or so has gotten into Minecraft. Thus, Lego Minecraft sets featured prominently in this year's gifts: 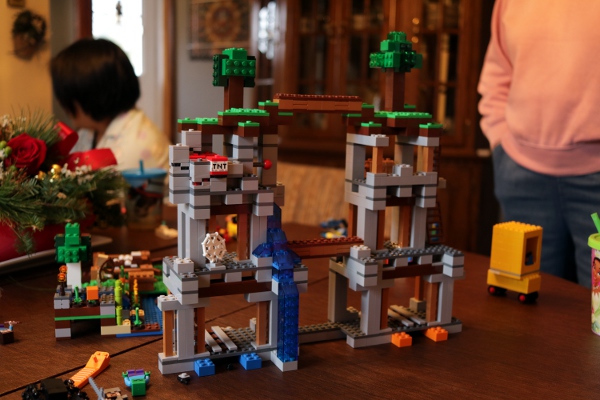 Really, these are perfect for each other. She put essentially all of this together herself, by the way-- I helped sort out the pieces for each step, and when there were steps calling for multiple copies of the same thing, I'd make one of the duplicates. But she's great with these, and really didn't need me.

I try to keep it from being "Cute Kid Photo of the Day," but can't always succeed: 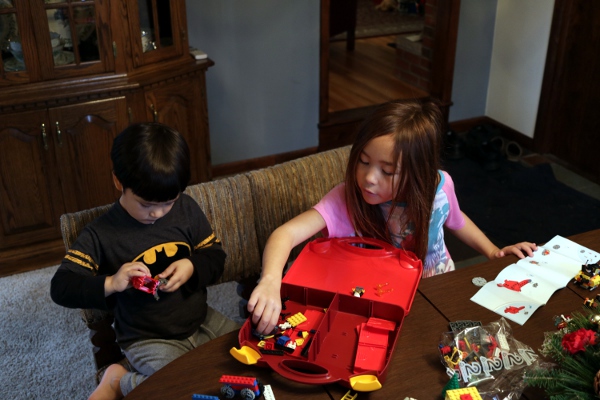 The Pip also likes Lego sets, but the "junior" ones are still a little challenging for him to get together. So he enlisted his sister to help out.

That gets us to the 27th, the day before I left for South Carolina. Which is a nice natural breakpoint, so I'll stop here, and do another catch-up post later.