For 11 months of the year (give or take), our Christmas decorations live in plastic storage boxes in the cabinet under the stairs in the basement. Of course, when we stow these away, there's inevitably one or two things that get missed in the initial sweep, and end up outside the boxes. And when I pulled the boxes out a few weeks back, something rolled off the top box, so I had to go fishing around in the back of the cabinet, where I eventually found both the ball I was looking for and this bit of pop-culture archaeology: 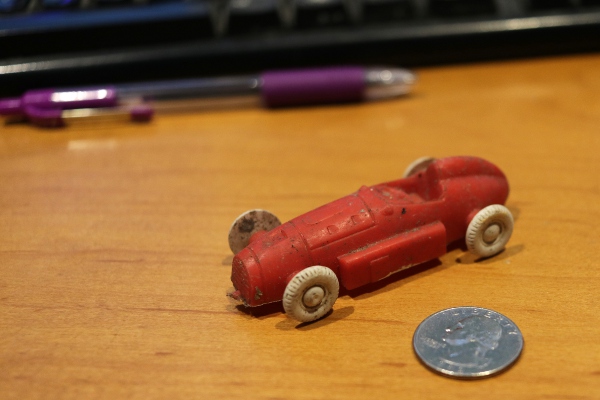 An old plastic car I found under the cellar stairs.

This is a little plastic toy car (currency for scale) that was in the French drain trench that circles the basement and connects to the sump pump. I have no idea how old it is-- I'd guess 1970's vintage, but I have no solid reason for thinking that other than I think that the previous owner's kids are around my age. It's been sitting on my desk since mid-December, until I got around to taking a couple of quick pictures last night when I realized I didn't have a photo of the day yet.

That looks older than that to me, for two reasons.

One, I'm older than you and it isn't something that matches up with anything in my memory, particularly the materials. Toy cars were shiny plastic or metal in the 60s. If anything, it looks more like 40s or 50s to me. Especially the wheels.

Two, that appears to be either an Offenhauser indy car, which was boring and uninteresting to look at even before the Lotus-Ford mid-engine design won in 1965, or the similarly designed F1 cars of the 40s and 50s that were wiped out by the Lotus and BRM rear engine designs with a snout that still says "race car" today.