This past weekend, Kate went to Arisia, and in order to get a change of scenery and a bit of adult backup, I took the kids up to visit friends in northern Vermont. They have two boys, the younger of whom is just a few months older than SteelyKid, and I was pretty sure the kids would hit it off. I turned out to be right about that, as SteelyKid and C. spent hours engrossed in the construction of an elaborate pillow fort: 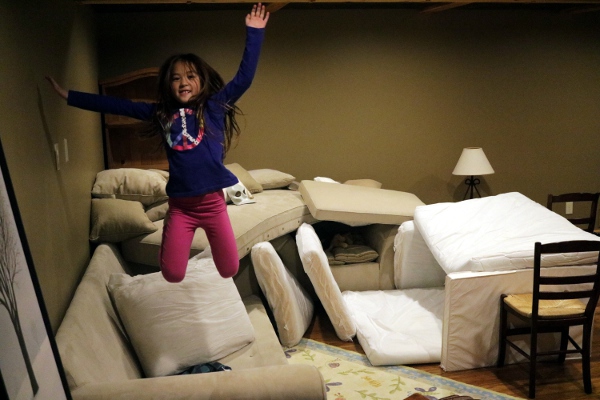 SteelyKid is really happy to be making a pillow fort.

This is a very early stage of the construction, from Friday night. They continued working on it all weekend, and at one point had to be dissuaded from attempting to add a second storey.

On the way up Saturday it was grey and rainy, so I couldn't see much, but Sunday dawned very prettily: 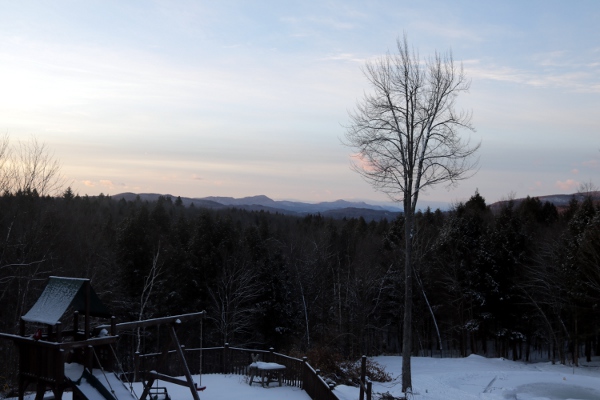 View of the Green Mountains from near Waterbury.

That's looking over the back yard of my friends' house. We spent much of Sunday afternoon sledding at a nearby golf course, which isn't really a camera-friendly activity.

The other big highlight of the trip, for The Pip at least, was the outdoor hot tub: 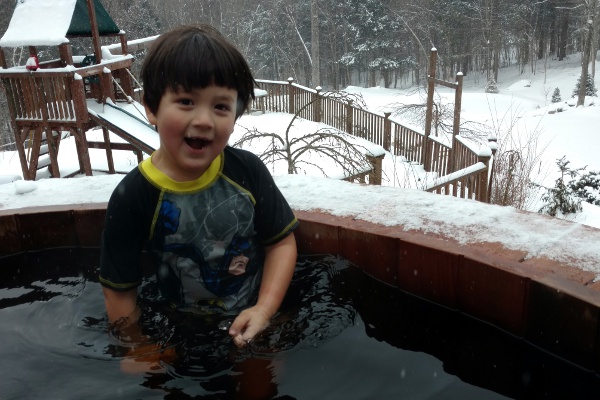 The Pip doing a happy dance inside the outdoor hot tub.

(That's taken with my phone, because again, not a camera-friendly activity...)

It took a little coaxing to get him in-- we had to "cool" the water by adding trivial amounts of snow to the spot where he was putting his feet in-- but once he was in, he loved it. He chattered happily the whole time, and kept bringing handfuls of snow and pieces of ice in to watch them melt. We couldn't get SteelyKid in, but he's definitely a hot-tubbing Little Dude.

So, a good time was had by all. The one down side is that the kids treated the whole thing like a trip to Fairyland, as if they might be trapped in Vermont forever by eating any food they found there. Fortunately, I had brought some staple foods from home (such is life with absurdly picky eaters), but they were a little underfed and overtired by the end. We got them to bed early last night, though, and off to school this morning, so life is back to sort of normal. And SteelyKid is already agitating for a return visit...

Kate is off at Arisia this weekend, so I took the kids to Grandma and Grandpa's. Where we've had good fun sledding and playing with a variety of toys. I'll be driving home Sunday afternoon, and my parents will be bringing the kids back on Monday, which is the MLK holiday in the US, so a day off for…

We have a couple of bird feeders near the house, one just outside the bay window in the front of the house, and the other on the side of the house right next to the dining room. (That one used to be farther out in the yard, where it functioned well as a means of luring bunnies and squirrels into…

This weekend's photos were mostly of the kids, and mostly had other people's kids in them, as they did a double play-date on Saturday afternoon. I'm going to lump two days together, because they're really just repeating previous themes. Here are the kids eating dinner at the Union women's…

Another week, another batch of photos. This is coming on Friday rather than the weekend because I'm going to be incommunicado for most of the next week, and have some free time now. 284/366: LIGO, Eat Your Heart Out Gravity wave clouds above our house. Sure, LIGO detected gravitational waves…
Advertisment