I did bring my good camera with me to Newport News, and took it on the tour of Jefferson Lab yesterday, but despite the existence of DSLR pics, you're getting a cell-phone snap for the photo of the day: 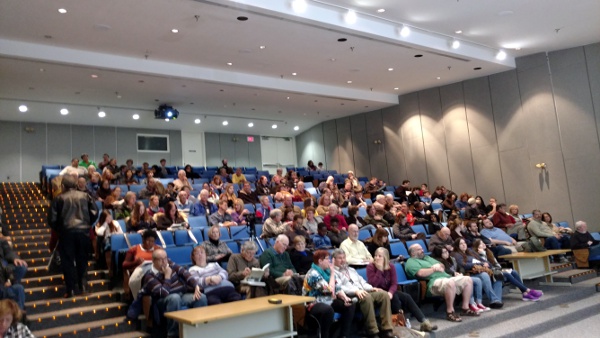 That's the audience about 10-15 minutes before my talk last night, so it was a good turnout. And they laughed in the right places, and asked some really good questions last night. I also got asked to appear in a selfie with a bunch of students from a local school, so they could prove they were there to get extra credit for their science class...

The talk went well, though we had some technical difficulties. The shiny new video projection system in the auditorium has an audio input jack on the VGA cable for the laptop input, but it's about four inches long, and the headphone jack for my laptop is on the far side of the keyboard from the VGA out. Whoops.

We ended up taping a lapel mike to the desk right under the laptop speaker, which was mostly fine, except for a couple of occasions where we got earsplitting feedback. Technology, man. What can you do? Video will be posted to the JLab web site at some point in the future, after they edit it and get closed captions done (I'm very sorry for whoever has to do that...)

I was also pleasantly surprised that a couple of Williams classmates showed up to the talk (they live in the area), so I went out with them afterwards for a couple of beers, to catch up. All in all, a good day.

Now, I just need to get through most of a day of airports and Regional Jets to get home to Niskayuna.