One of my favorite modern tales of scientific discovery is the Mpemba Effect, named after Erasto Mpemba, a schoolboy in Tanzania who noticed while making ice cream that hot mix put in the freezer solidified faster than cold. This counter-intuitive result has been replicated a bunch of times, and physicists and chemists continue to debate the reason for it.

It was bitterly cold this weekend, dipping down into the negative Fahrenheit, which wasn't great for, you know, leaving the house, but did provide an opportunity to test the Mpemba Effect. Because when the icy winds of winter blow, that's a great time to do SCIENCE!... 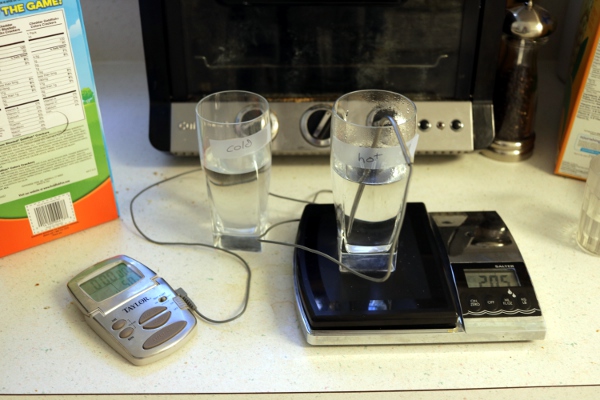 Materials for an attempt to observe the Mpemba Effect.

One of the tricky things about the Mpemba Effect is quantifying what it means for hot liquid to freeze faster than cold, but I thought of a way to (attempt to) handle that, which was another reason for running the test. So I grabbed a couple of water glasses out of the cabinet, and filled one with 200g of filtered tap water at 18C, and the other with filtered tap water heated in the microwave, at 81C. The water glasses had a mass of about 350g; there's a +/-5g error on all those masses, because the cheap kitchen scale we have at home only reads to the nearest 5g.

Then, I took the two glasses and put them out on the patio table:

Starting condition for a science experiment.

(Actually, I put them like this for the photo, then separated them a little more, just to make sure that there wasn't any thermal contact between the samples...)

I left them outside for about two hours, which was long enough for them to partially freeze, but not completely: 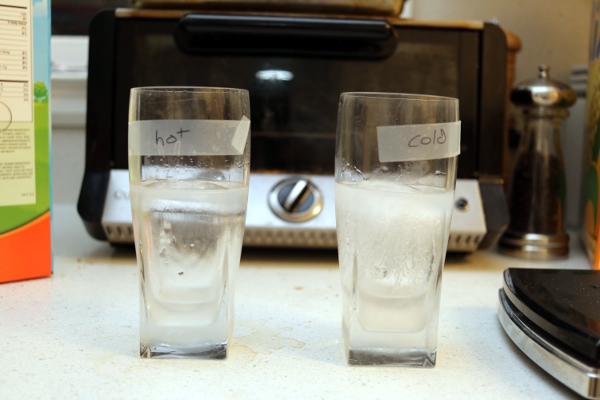 I weighed the two glasses again, and found that the hot water had lost some mass-- the total mass was about 540g, so 10g down from the start. This was presumably due to evaporation-- you can just see a cloud of steam rising from it in the outdoor photo. The cold water didn't lose any mass, continuing to register at 550g, though again: cheap kitchen scale.

To get at the amount of freezing, I took a steak knife and chopped a hole in the top layer of ice in each glass, then poured out the liquid water from underneath. Then I weighed the glasses again: the cold water glass plus solid ice clocked in at 455g, and the hot water glass with ice at 420g.

So, as an attempt to observe the Mpemba Effect, this was pretty much a complete failure. Alas. This isn't entirely surprising, though, as the effect is notoriously finnicky. Which is why it's been argued about in the literature for 40-odd years. I thought about repeating the trial with slightly different conditions-- one of the things you see in a lot of the discussions of this is a comparison between water that was heated and allowed to cool before being put in the freezer and water that was put in the freezer while hot. The idea being that heating may drive off some impurities, changing the water a bit. I didn't try that on Sunday because I was in a hurry to set it up before dinner and the kids' bedtime, and we got snow on Monday that would've messed up the conditions. But it's something I'll keep in mind for the next time it's unpleasantly cold...

If the effect is real, it is likely subtle. It might manifest for a smaller temperature difference.

It's definitely a real effect, as there's a moderately substantial body of literature documenting it stretching back to the late 1960's. I didn't check the temperature difference in typical experiments, though, because this was slapped together quickly.

My students did a research project on it and saw the effect with ice cream. We used stand alone ice cream makers adapted to fit a thermocouple so we could measure the rate of change in temp. There was a small but distinct increase in the rate of cooling for the hot ice cream mix.

Unless you're saying that the initially hot water has a larger cooling rate when it is 50 degrees than water which started out at 50 degrees did when it was 50 degrees. That would be an interesting effect (and necessary for the Mpemba effect).

Has any of the formal (or for that matter informal) literature successfully replicating the phenomenon used plain water? I wonder if the fact that ice cream mix is a lipid-rich suspension is not somehow necessary.

I would suggest repeating the experiment, although next time, leave two empty glasses outside where you intend to run the experiment, and pour the water from the first two glasses into the pre-chilled ones. My hypothesis being, warming the glass in the microwave likely stored some heat energy in the glass surrounding the water. In the Mpemba setup, it's the water alone which freezes at a faster rate, not water continually heated by an external source. The constant re-application of heat into the water would not be consistent with the parameters of the original experiment.