Thursday was a travel day, the less said about which the better. So, while I do have a couple of cell-phone snaps from the day, I'm just going to ignore it, and give you two better photos from Friday and Saturday. These go nicely together, as you can see in the composite that's the "featured image" for this post. 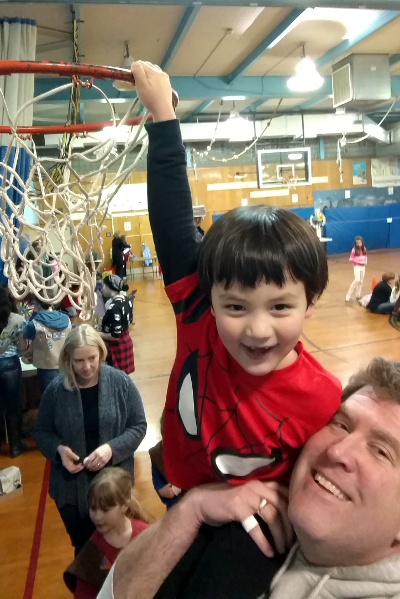 The Pip hanging on the rim at the Girl Scout carnival.

Friday night, the local Girl Scouts had a "nickel carnival" as a fundraiser for... something or another. SteelyKid is a scout, and Kate's helping lead her Brownie troop, so they had to go, and I brought the Pip along because it was really a lot of running around in an elementary-school gym. Here, we see him deomnstrating that while he's just a Little Dude, he's got his father's hops.

(That is, like me, he could easily dunk a basketball if allowed to sit on the shoulders of another person...) 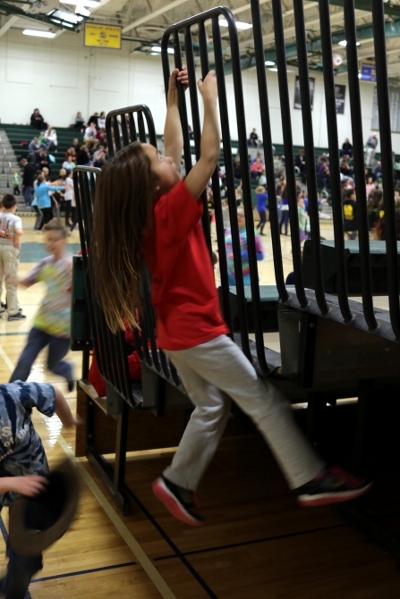 SteelyKid climbing the railing at the Odyssey of the Mind party.

Saturday was the big Odyssey of the Mind competition, about which more later. After the competing was finished, while they were tallying scores, they had a "dance party" which basically involved a DJ playing really loud music in the gym while a few hundred kids ran around screaming. There were a dozen-plus epic games of tag going on through the crowd, involving non-overlapping sets of kids.

At one point, SteelyKid and one of her friends started hanging on the safety railings on the end of the bleachers (having run underneath the bleachers a bunch of times already). Then they demonstrated that they could, in fact, climb up these hand-over-hand, which you can see SteelyKid doing here. When on the ground, the bottom of this particular railing is right around head high for her, so she's hauled herself a good way up it already.

This is the official halfway point of the photo-a-day project. I feel like I ought to do some summing-up, maybe, but we just reached the end of The Pip's normal allocation of weekend-morning cartoons, so I need to go deal with that situation...