Having done a thematic set of animal photos, it makes sense to complete the catching-up process by pulling together a couple of shots of man-made things. 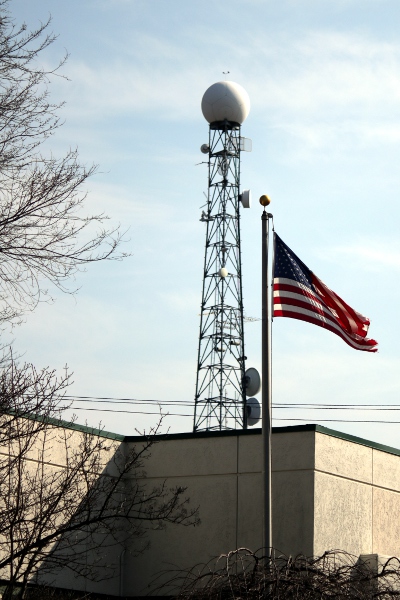 The broadcast tower from the local CBS affiliate.

This is also from my trip to the post office the other day. The tall tower is a broadcast antenna of some sort from the CBS station, which is actually not in the foreground building here, but one behind it that you can't see. The giant flag is associated with a stockbroker. America, f*&k yeah. 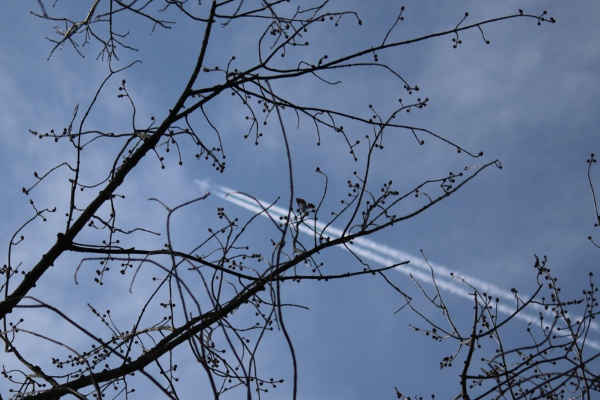 A slightly fuzzy plane through a tree.

I like the way that the thin clouds and a little bit of depth-of-field combine to give this plane a sort of ghostly aspect when seen through the trees. It's not just the camera focus, because I saw the same effect by eye (which is why I was shooting a plane through trees in the first place). It's definitely stronger in the photo than it was live, though.

And that catches us up to the present day... I'm solo-parenting tonight, as Kate's down in The City to argue a case, so I may not have the time or brainpower to edit and post photos tomorrow. Next week, I'll be at the March Meeting all week, so it'll be mostly cell-phone snapshots; consider yourself warned.

And as a physicist, you should be able to identify most of the different antennas on that tower and also realize that none of them broadcast a commercial television signal. The tower isn't tall enough. (TV and FM and microwave are line-of-sight transmission, so you usually see a 1000' tower with an antenna at the top.)

Wiki says WRGB broadcasts from near Voorheesville. And that it started in 1928 as one of the first experimental stations.