There are only a couple of bands I'd drive a significant distance to see live, and now I've made the trip to NYC to see two of them. I went to see the Afghan Whigs in 2014, and this past Friday, I drove to Brooklyn for a Hold Steady show. And this time, I have a cool picture as a bonus... 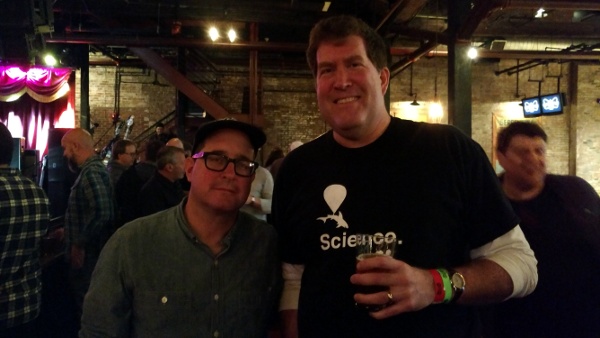 Me with Craig Finn of the Hold Steady.

The origin of the picture, obviously, needs a little explaining. The current set of shows is a four-night stand (originally three, but they added one after the first three sold out) at the Brooklyn Bowl, reuniting with keyboardist Franz Nicolay for the 10th anniversary of their album Boys and Girls in America. They did a fan club presale thing for the shows, which included a package with all three shows and a happy hour at Friday's sound check.

Obviously, I didn't buy tickets for all three shows, but way back in 2013 or so, I contributed to a crowdfunded EP they did. We've never been able to work out the timing for the bonus item I bought then, so when I bought a ticket for Friday's show, I contacted the people who ran the crowdfunding to see if I could swap it for a spot at the sound check event. They agreed, so I made the trip down a little earlier than I otherwise might've, and got to see my favorite band rehearse...

The sound check was fascinating in the way that seeing behind the scenes with people who are really good at what they do is always fascinating. They ran through a few songs that turned up in the set list that night-- "Adderall," "Stevie Nix," "Charlemagne in Sweatpants"-- and went over "Don't Let Me Explode" about three times to sort out some issue that was completely inaudible to me. There was a bit of back-and-forth after the first pass between Franz Nicolay and Steve Selvidge (who only joined the band after Franz left) about what key they were in, but whatever it was that they were hearing wasn't super obvious. And whatever it was must've gotten fixed, because they played it during the show later that night. This was, obviously, a very late stage in the rehearsal process, so they were mostly fine-tuning stuff, and the atmosphere was pretty loose and fun, though much more low-key than the real show.

The sound check was also the first definitive proof I've seen that Craig Finn's guitar is actually connected to anything when he's on stage-- I've seen them twice before, and one of those times he never even pretended to play, but even when he had a guitar, I don't think I heard anything that definitely came from it. It does work, though, because in the bit of "Charlemagne in Sweatpants" where Selvidge and original guitarist Tad Kubler trade off solos for a bit, Finn played a solo, too (and got teased by Kubler about it...). They also paid off another crowdfunding bonus, for a guy from Montana who had bought a "sound check jam," and came on stage to play "Magazines" using Finn's guitar (I have video of this on my phone, but haven't watched it).

They also took a couple of requests-- "Spinners," and... I forget if "Multitude of Casualties" was the request, or if "Stevie Nix" was-- and answered some questions from the crowd. After the sound check, there was a happy hour while the opener (The So So Glos) set up their gear and did a little soundchecking of their own. At least some of the band members hung around for the happy hour (Franz Nicolay had his family there, so he was just playing with a small child)-- I spent a few minutes talking bowling and booze with bassist Galen Polivka, and Craig Finn worked the room, talking with just about everyone, signing, and taking photos. As you can see above.

(I wish I could say I had a deep and meaningful conversation with him, but really, it was just inconsequential small talk. I asked what the "North" on his hat meant, and he explained that some people he knows in Minneapolis were trying to "re-brand" the "upper midwest" as "the North," on the grounds that Minnesota, Wisconsin, and Michigan don't really have all the much in common with, say, Missouri. The other guys I was talking with before Finn stopped by asked a couple of questions about doing a run of shows, and then we took pictures (my phone was embarrassingly Difficult about this) and he moved on.)

I was actually starting to be drunk by the end of the happy hour-- they had good local microbrews on tap at the venue, and some of them were pretty potent-- and there were about three hours to kill before the opening act was scheduled to start, so I walked off to a Moroccan place that had been recommended by the guys I was talking to at happy hour, who lived in the area, and got some very good food and cleared my head.

The So So Glos were one of the opening acts on the last Hold Steady tour, so they obviously know each other (and the lead singer would come out at the end of the encore to cover "American Music" with the Hold Steady). They've gotten a bit of radio play with "ADD Life" (which I actually find slightly annoying), and turned in a good, high-energy opening set. As is often the case, I was struck by how the guy who played the tricky guitar parts stayed pretty still, while the rhythm guitarist jumped around a whole lot...

And then, the main event... They're one of only two acts I've seen three times (the other is Bob Dylan), and every show I've been to has been excellent. This was a bit different than past shows, in that they don't have a new record to promote, but are celebrating an old one. And, of course, the big selling point of these shows is that they're back with Franz Nicolay, so the set list was very heavy on stuff from a few albums ago-- I don't think they played anything from either Heaven is Whenever or Teeth Dreams (other than "Spinners" in the sound check)-- and stuff with prominent keyboard parts. This means that some of my favorites didn't make the set list-- "Cattle and the Creeping Things," "You Gotta Dance," "Chicago Seemed Tired Last Night," "Most People Are DJ's"-- but, you know, if they were going to play all my favorite songs, the show would run about six hours.

They did a good mix of stuff, with several songs I haven't heard live before-- the set-opening "Positive Jam" (first track off their first album), "Don't Let Me Explode," and "Killer Parties" (which is a semi-traditional closing number, though in this case they went into "American Music" after it). It was neat to see the difference in energy level between the sound check run-throughs and the final performances-- a great advertisement for live performances with a friendly crowd-- and they remain a really tight band. Selvidge and Kubler are great guitarists but not exactly showy-- Kubler sometimes turns his back to the crowd when playing really involved solos-- but Finn remains a tremendously energetic front man, and it's amazing how much dancing Nicolay manages despite being required to stay behind his keyboard.

And, of course, it's 2016, so there's already a video clip from Friday's show online:

On the drive down and back, I had my whole Hold Steady collection on shuffle play (including a couple of live shows that haven't been officially released), and as always, I was struck by how unlikely some of their success seems. I mean, these are really complicated songs with key changes and time-signature changes left and right, and really dense lyrics full of literary and religious references. Even the sing-along parts seem too complicated to work-- "Chips Ahoy!" has a shout-along bit that goes eight syllables ("Whoa-oh-oh, oh-oh oh-oh-oh!").

And yet, through some combination of formidable musical talent and sheer charisma, it all works brilliantly, especially live. Yeah, fine, they're not selling out stadiums, but they can pack a venue with fans who turn out to spend a couple hours shouting along with all those dense lyrics and complicated musical transitions. As Craig Finn regularly notes from the stage, there is "So! Much! Joy!" in what they do, and it was totally worth the drive down to Brooklyn and back to be a part of it.