A lonely chair in North London: how urban skeuomorphs speak volumes about the city

I live in Haringey, an as-yet-ungentrified part of North London, and there's a small park near me with a very curious chair in it. 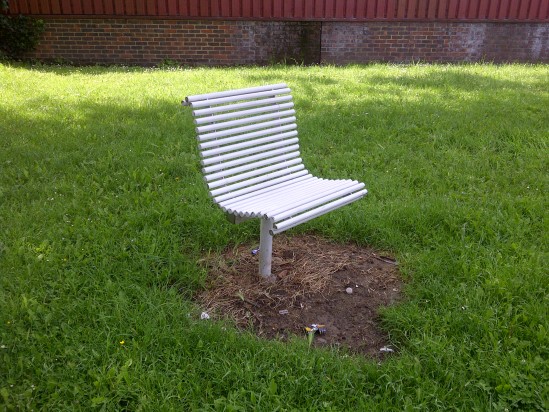 The park isn't much - just a strip of lawn passing by a basketball court and a small playground for toddlers. Sprouting like mushrooms here and there are chairs like this one.  Lonely little chairs just big enough for one person to sit on.

When I first saw these, I thought they were a little odd, but didn't put much weight on it.  Just another poorly thought out piece of urban design, and lord knows Britain has plenty of that to go around.  One afternoon I saw a man on one, his wife perched on his knee.  It didn't look very comfortable for either of them.

At first it seemed strange that there was any malign intent behind these benches. After all, if you didn't want people sitting in the park, why not skip the benches altogether?  Was this some kind of compromise? Are these the cheapest seats money can buy?

The answer became obvious the next time I wandered through the park in the evening.  A small group of immigrants stood clustered on the pavement, drinking cans of cheap lager and chatting, as people do.  I realised that the chairs were designed specifically with them in mind.  If there had been a bench, these men would have sat and socialised there, rather than standing awkwardly on a street corner.  Whoever put these seats in wanted to invite people to sit in the park - just not groups of more than one or two people at at time.  It's another example of the subtle social coercions that are routinely folded into urban design.

I think that's a bit sad, ultimately, as the park is otherwise unused at night, and it wouldn't hurt to have a few extra eyes and ears in a spot that runs behind a lot of houses.  All these chairs achieve is to push the men onto a street corner 100 yards away, where there's no bin for the empty cans and they're even more visible than before. But then, it's a recurring theme of hardened urban architecture from pig's ears to sonic deterrents, that instead of addressing an issue, it's simply shifted elsewhere.

I think of this as curious example of skeuomorphic urban design, because while it looks like a genuine bench, it's actually designed to prevent any kind of the behaviour (sitting, socialising) that benches encourage.  It's a sort of ornamental accent evoking an idealised view of what a park should be like, without actually serving the needs of the people that use the park.

On becoming a cyborg

First: the backstory. I'm slowly going deaf. No one knows why. First doctor blamed rock'n'roll.  Next one blamed my genetics. I'm still waiting for video games and teen sex to be indicted. They all agree that it's irreversible.  Just shitty luck.  Today I went to have some phones fitted - something…

Last Friday afternoon my mother and step-mother came to visit.  My mother had surgery on her foot back in the summer and has had a long, slow recovery, and is only now able to travel and drive, so this was the first visit in nearly six months.  As we sat around the table, we joked that it would be…

If your toddler falls from your window, will it necessarily die?

No! A surprising number of toddlers who manage to get their way through a window opening to fall to the pavement below live. Something just over three thousand toddlers do this every year in the US. Here in Minneapolis, we had our first reported case for the Spring Season of a toddler falling out…

If your toddler falls from your window, will it necessarily die?

No! A surprising number of toddlers who manage to get their way through a window opening to fall to the pavement below live. Something just over three thousand toddlers do this every year in the US. Kids fall all the time. About 2,300,000 US children (under 14 years old) are treated at a hospital…

More likely the intent was to encourage sitting but prevent sleeping on the park bench.

I don't think so, Thomas, if only because there are plenty of designs in use to prevent sleeping - benches that slope, or have armrests in the middle.

It's worth mentioning these chairs are placed far apart from each other to avoid any possibility of groups using them.

"One afternoon I saw a man on one, his wife perched on his knee."
Maybe this is what they want to encourage - would be nice, no?