Some time back, I pitched a few editors the idea of doing something on a new breed of airborne aircraft carriers. Sadly it didn't stick, because no one had invented them yet. Such are the constraints of writing non-fiction. Reality has a way of catching up though, and New Scientist broke the news today about the latest in air tech: floating fortresses that dispense drones and guided missiles on command.

The concept of an airborne aircraft carrier is not new. Almost as soon as we were in the air, we started trying to compound air power by sticking one craft on top of (or under, or alongside) another.  The main goal of parasitic aircraft was to balance the long-distance durability of bombers with the agility and attack capability of fighters. However, the same two sticking points invariably got in the way. 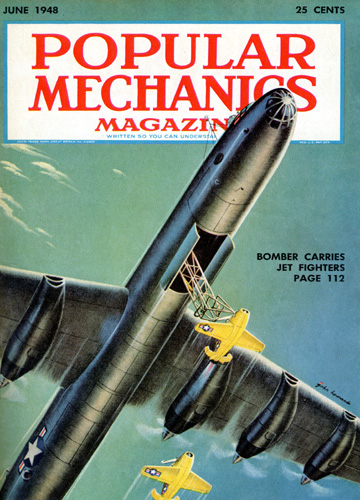 No one could figure out a way of hitching one plane to another in a way it could lift off and be recovered safely and reliably. Initial success with biplanes slung under zeppelin went unmatched.  Not wanting to fight a war with zeppelin and biplanes, the USAF's Project Tip Tow  tried to attach a pair of F-84D Thunderjets to the wingtips of a Boeing B-29 Superfortress, like a string of paper dolls. During a test run, a malfunction twisted the left side parasite craft off, slammed it into the mothership, and killed everyone on board all three planes.  Another design, the McDonnell XF-85, was no less worrisome. If it wasn't bad enough that  test pilot Edwin Schoch nearly took his head off during a botched approach to the mothership's retrieval crane (he lost his canopy and helmet in the attempt!), he then had to land the damaged Goblin - a plane that didn't have any landing gear.  In a later project, designers envisioned a two storey flight deck built into a 747 jumbo jet; three small fighters could be winced out and recovered. But the idea was ultimately abandoned.

The trouble was, even if the first half of the airborne aircraft carrier plan had been successful, the fighter craft had to be so small that they were useless as attack craft. The afore-mentioned Goblin was no bigger than a Ford Fiesta, and carried just four 13mm machine guns. Hardly the embodiment of air superiority: 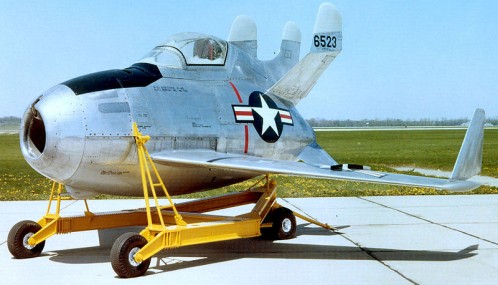 However by the turn of the century, two distinct strands of air technology offered to reigite this old dream. The first was the resurgence of blimp-like Long Endurance Multi-Intelligence Vehicles, which can carry payloads on par with Lockheed's C-5 workhorse, and remain airborne for weeks at a time.  The other was drone warfare. Removing the pilot from the plane meant aircraft could be much smaller and every bit as effective.  So now we have heavy lifters that can provide a landing space, fuel, arms, and transport, and small aircraft that could leap off it into action.  Around 2011, I spoke to a contact at a British aircraft company who confirmed that the concept of using blimps as motherships for parasite craft was starting to take hold. 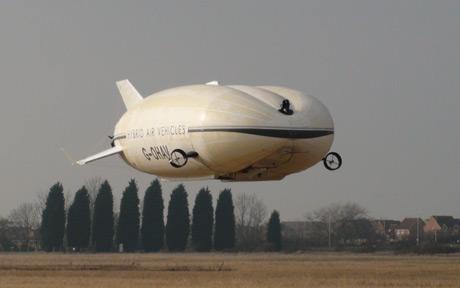 There was only one problem with this combination: small drones can't land. No laughing at the back there!  General Atomic's $4m Predator drones can, but they're the size of a Cessna.  Part of the problem is that landing a UAV requires large, energy-hogging equipment connected to precise ground beacons (IIRC - perhaps someone more knowledgeable can weigh in), which is too much for small craft to carry. Instead, the little ones either land using "benign disintegration" (ie snapping into predetermined pieces) or, once they get low on fuel, find a target and crash their missile nose cone into it. Not very sustainable, Uncle Sam!

However, companies such as Roke are finding ways around this, by developing lightweight visual-based landing systems.  If these were combined with today's generation of small UAV, I don't see much to prevent airborne aircraft carriers soaring over warzones, dispensing and recovering fighter craft. 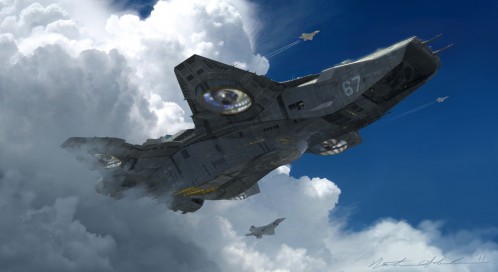 So far, so Avengers. But is this important, other than the cool factor? The answer to that is a resounding yes.  Take a look at the sea-borne aircraft carrier.   Why does China want one so bad? Why does a cash-strapped nation like Britain feel the need to build a brand new one? Because these are more than just warships, they are a massive strategic advantage.  With an aircraft carrier, you can export your air superiority to any international waters you like.  Geopolitically, this is a tremendous amount of clout to wield.  But they've got one shortcoming - they can only go where it's wet underfoot.  So for landlocked regions, countries still need to place nice with local warlords and tinpot dictators in the hope they'll allow the use of their airfields.    Airborne aircraft carriers could obviate that, by allowing countries to transport air power across the globe and rain death on AK-47 shaking evil-doers from a forward base set 40,000 feet in the air.  Conceivably, there could be an entire supply chain stretching from Fort Hood to Evildoeristan without ever touching the ground.  And at a fraction of the cost of a traditional seaborne aircraft carrier, it won't be just the biggest kids on the block who can afford it.  It'll be interesting to see how this pans out.

Didn't Gerry Anderson go the whole way in 'Captain Scarlet' and have Col. White (the head of Spectrum) based on an airborne aircraft carrier? The 'Angels' would fly off it when ordered to help out Scarlet defeat the latest plot of the Mysterons.

On a more serious note, the problem with the small 'parasite' aircraft (and this concept goes back to the Curtiss biplanes carried on the Akron , etc in between the wars, and the SR71 had a recon drone) has been the limitations of the defending aircraft. The need to make them small has been a problem, although you could argue that drones now make this possible. The single biggest problem is how to keep the carrier in
the sky. Since we havn't yet got antigrav systems, we would have to use conventional lift engines. The cost of fuel would be huge, and a logistical nightmare. The carrier would also present an excellent target in itself.
Seaborne carriers use a huge amount of fuel, but at least they can float! Perhaps a more practical and cheaper idea would be to use seaborne drones. A relatively small number of ships (particularly carriers, but they can be smaller and simpler) can launch high speed drones over large distances. That way you have coverage , but at less cost.
Still, it's an interesting concept and brings back memories of childhood TV. Spectrum is green....

The first parasitic aircraft launched from another was done by Britain in 1916.
The Russians had the concept in operation (as "Zveno") in the 1930's, (almost 20 years earlier than the USA experiments mentioned here) AND actually used the concept in about 30 combat missions in 1941. One of those missions resulted in the shooting-down of two German fighters, and another the destruction of a bridge.

Assuming that your carrier is big enough to be bouyant, you are either going to have to have spectacularly good defensive systems, able to shoot down any possible missile or kinetic weapon, or keep it a very long way from possible harm.

I'm thinking of a more peaceful use for such a platform; a space station. At 10-15km, you are above 90% or more of the atmosphere, and weather conditions will be far more consistent; you can also envisage using solar panel coverage ton generate hydrogen from collected water, for bouyancy, fuel and night time running.

This then gives two launch modes; standard rockets, which would have fewer problems with drag and weather conditions by launching from this altitude, plus a bigger margin of safety for crewed missions. The other mode is a space gun mode for hardened cargo. Being above most of the atmosphere makes this a lot easier as well.

And, of course, if you wanted to build an airport for transcontinental supersonic aircraft, doing so at 40k feet would have advantages.

Hey Vince:
You should check the links provided here before whining. He links to the wiki on the Zveno project. And I don't see anything like refashioning all history to be American. Your post is senseless whinging.

Don't be so quick to celebrate advances in warfare, especially when you don't know who will control those weapons in the future.

LIke these for the Commercial sense like the 1930s Navy experiments & Zeppliens alone.
B36 proved some value in Cold War tests called FICON.

The USS Akron and Macon were dirigibles in the 1930s that launched and recovered Sparrowhawk biplanes.