Dressed in a leather jacket and black roll neck, Daniel Libeskind holds an air of affability that complements his passionate and lucid discussion about the importance of architecture in healing and rebuilding communities.  Born into a Jewish family in Poland, he experienced life under the totalitarian Soviets before emigrating to New York, a narrative that makes him ideally suited to be the man who produced new visions for Germany and Poland after the fall of the Berlin wall through to the Freedom Tower which rose from  the shadows of the World Trade Centre in New York City. Speaking of the broken apart streets of Berlin, he described the gaps as “a light that stabs one in the heart”. 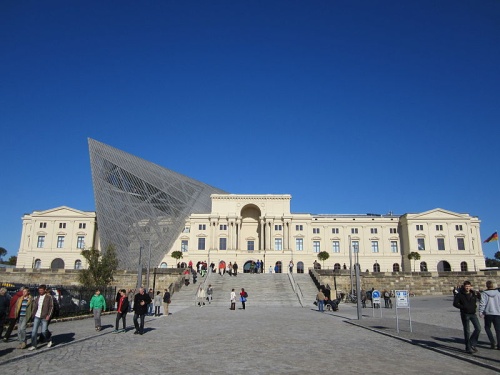 His redesign of the Military History Museum in Dresden saw a sleek geometric arrowhead penetrate the rigid facade , erupting from the face of the building to point like compass arrow toward the source of the bombs that flattened the ancient city.  Both an attempt to reconcile the past and to make a break from  it (the museum was alternatively host to both Nazi and Soviet self-histories) , the strange angles created new and strange spaces inside – war horses (and dogs, and bees) – walk single file along a sharp edge, while missiles of different sizes slide down a steeply cantered wall.  Walking through the museum, you eventually arrive at the elevated tip of the glass-lined arrow, and see not streets pockmarked by bombs, but a new and vibrant Dresden rising.

Dialogue and counterpoint are both imp0rtant to Libeskind, and he describes residential tower Zlota 44  in Warsaw as a rebuke to dictatorship, as it stands impudent like a raised middle finger before a tower built in the imposing fascist style, “a gift from Stalin” to the city. 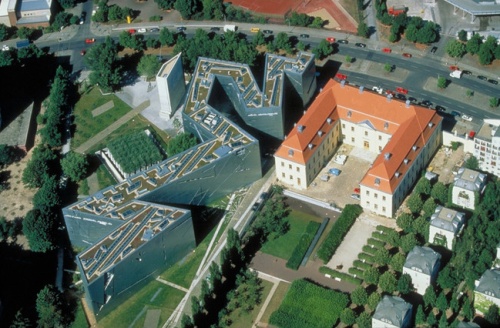 On the same day Libeskind’s Jewish Museum in Berlin opened its doors, a new wound was torn open when terrorists attacked the World Trade Centre, and once again he was tasked with helping a city heal. He worked to reflect the ideals of the city into the new buildings – democracy, history, liberty, and hope for the future. Rather than pack the space with new towers, Libeskind created a new open social space, something he felt as a local that the area desperately needed. The footprint of the tower was turned into a reflecting pond, and below ground, the retaining slurry wall that had been exposed like the bone in a deep cut was left unpatched as part of the museum space.

His work, signature as it is in its sharp and jutting glass against traditional stonework, could be easily written off as the work of an egotist wunderkind, playing with the city as a toybox.  And yet, it’s clear that he really does envision architecture as an active part of local culture – breaking with history being just as important as paying tribute to it – but that most of all, the city should serve the ones who live in it, both now and tomorrow.

Your Friday Dose of Woo: And now for something completely different...

Ever since I started Your Friday Dose of Woo (YFDoW) back in June, I had always intended that someday I wanted to expand this loving deconstruction of various forms of woo beyond just medical woo and quackery. True, having a little fun with woo that claims to treat disease or restore health is…

Your Friday Dose of Woo: No planes no brains

I've sort of alluded to it, but grant fever took over the last couple of days as the deadline approaches. Unfortunately, it happened right around the time when the GMC ruling on Andrew Wakefield came down and came down hard on him and his unethical behavior. Oh, well, as they say, it looks like I…

No that's not real and neither are the others in the post! Argonauta Argo, National Museum& Gallery, Cardiff Spending time at the Museum Comparative Zoology at Harvard (MCZ), a Museum of a Museum, I realize the potential for items to get lost in unvisited cabinets. This happens regularly in…

Check out my guest post at the venerable Times Online: Built into the streets of New York City is a solar calendar on a truly massive scale. Every year around July 12th, New Yorkers are treated to a spectacular phenomenon as the setting sun aligns directly with the east-west streets of Manhattan's…

To present a contrary view, I find Libeskind's work to be shallow and superficial. It relies too heavily on cliched one-liners. Whereas Libeskind assigns pretentious meaning to the trademark shard that shatters the Dresden Museum, most others will see his design as a violent, ego-driven insertion into a beatiful classical facade. In other words, Libeskind's architecture is at least as destructive and hate-filled as the Nazi bombs he pretends to be abhorred by. (Libeskind destroyed the one remaining building NOT destroyed by bombs.) And it is interesting that these same shard forms that supposedly symbolise war are applied to projects as diverse as museums, private residents and shopping centers. He confuses a branding idea with what really is just a visually recognizable gimmick.

More to the point, it doesn't take much fact checking to look beyond Libeskind's own self-serving press releases to see that he is a deceitful phony. In a New York Times article, he lied to the journalist claiming he designed his own apartment in New York. He did so to cover up the embarrassing truth that Libeskind's own wife had hired another architect (Alex Gorlin) to design their home. Presumably she, more than anyone else knew what a fraud her husband is and wanted a more competent architect to handle the project.