Silent alarm: a battery-powered bell which has rung inaudibly for 173 years 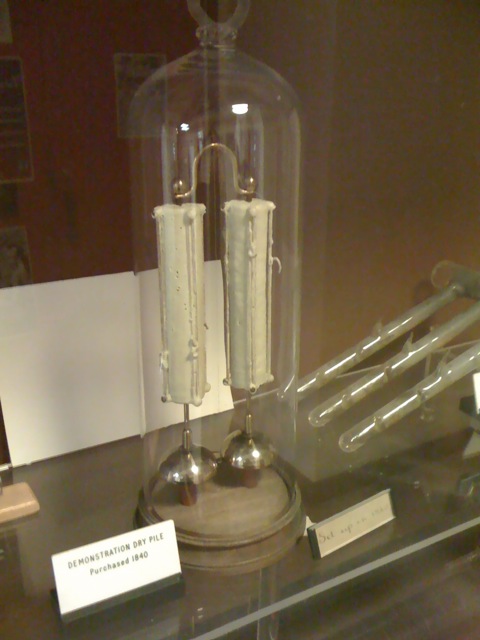 A whimsical thing: the Oxford Electric Bell, pictured here, is a battery-powered device that has been running (almost!) continuously since it was built in 1840. A clapper on a pendulum rocks from side to side between two metal spheres, driven by electrostatic forces. The bell is powered by a pair of mysterious batteries, the composition of which is unknown.

However, because it sits behind two layers of protective glass, the bell is inaudible.

If the bell is inaudible, how do we know it's working? ;-)

Seriously, the yt video of the actual OEB is not very informative:
http://www.youtube.com/watch?v=1Dx1-f8xQio

This video of a reproduction is more useful:
http://www.youtube.com/watch?v=uKwSHtQwzD8

My skepticism bell is ringing...

Were there any records left to indicate how this was built, or what else the person who built it may also have built (the latter by way of clues and inferences)?

How do we know it's being driven by electrostatic charge, as opposed to something else such as ambient magnetic fields (or angels playing tetherball with the clapper;-) or "it must be static electricity because we've ruled out everything else"....?

For some time I've thought that simple tabletop electrostatic motors (Popular Science ran an article decades ago with DIY plans; it would be cool to be able to buy a kit or completed unit), coupled to small hobbyist motors used as generators, could provide a trickle of power with which to charge mobile devices or perhaps batteries to run a small LED light. A setup like this would be an attractive science demo desktop toy, and would also be practical to keep a cellphone working during a grid power outage. An electrostatic bell in a vacuum jar on the other hand, doesn't appear to have any practical applications.

And while I frequently and merrily debunk the advocates of "free energy," I suppose in all fairness we should grant that "perpetual motion" from ambient energy sources (such as atmospheric static electricity) is acceptable, and remove the Catch-22 about "the bearings will eventually wear out (or the Sun will expand into a red giant, wiping out the Earth and the perpetual motion machine along with it)." If nothing else, this would help with the debunking, because it would remove a dozy dodge often used by "free energy" advocates.

By analogy, granting that computers may some day exhibit the behavioral signs of consciousness, enables focusing debate on whether human minds can be transplanted or "uploaded" from their original organic brains into silicon "brains". If such a thing was possible (it is not, at least in the sense of maintaining continuity of individual existence), then reincarnation in the traditional sense would also be possible (which of course is unproven). Once you have the "mind transplant/upload" advocates on the issue of reincarnation, the inherently religious nature of belief in "uploading" is exposed. But that's another debate for another day;-)

Yeah, i have one of those also. It's ringing, you just can't hear it. Power source? Mystery!