What is that Background?

Taking a look at the background picture, and wondering what it is?  It's the Bullet Cluster, also known to astronomers as 1E 0657-56.

What's so special about it? Well, these are actually two galaxy clusters that are in the process of merging, and are colliding with one another! Although this is very cool (and rare) in and of itself, finding this object allowed us to test experimentally the dark matter hypothesis.

If all of the matter in the universe was composed of protons, neutrons, and electrons, then we would find mass in the same place we find light. But look at the x-ray imaging (in purple, which shows the normal matter) overlayed with a map of all of the mass (in blue, obtained by gravitational lensing). 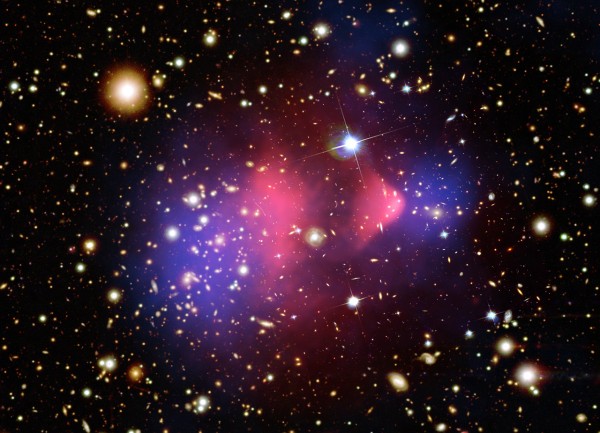 They don't match up! In particular, there are two blue blobs that are consistent with the "dark matter" in these clusters just passing through one another, while the normal matter splats in the middle, heating up and emitting x-rays.

For you skeptics out there who think that one example doesn't prove anything, cluster Abell 520 shows the same effect, with the "normal matter" shown in purple and the "gravitational matter" (which is normal and dark matter) shown in blue.