“On what can we now place our hopes of solving the many riddles which still exist as to the origin and composition of cosmic rays?” –Victor Francis Hess

It’s often said that advanced in physics aren’t met with “eureka!” but rather with “that’s funny,” but the truth is even stranger sometimes. Rather than the scientific method of: hypothesis, method, experiment, results, conclusion, revise, repeat, etc., many times throughout history, it’s been a series of surprise observations that have often led to our greatest leaps forward. When the speed of light was discovered not to differ when you moved with or against it, it was so revolutionary it was the only Nobel Prize ever awarded for a null result. 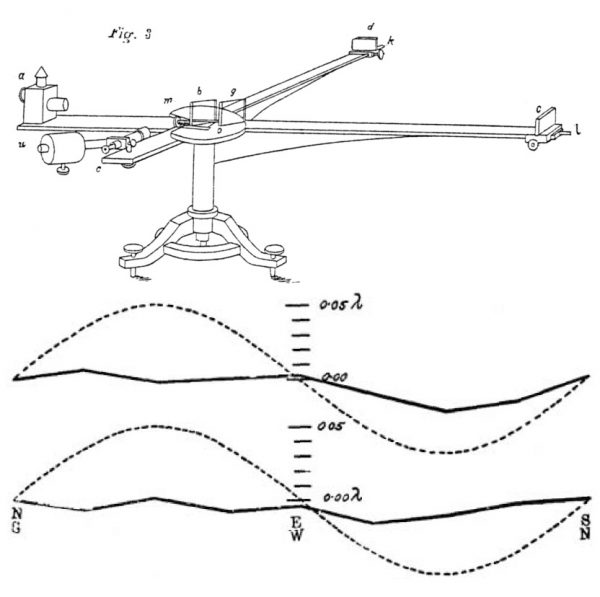 The Michelson interferometer (top) showed a negligible shift in light patterns (bottom, solid) as compared with what was expected if Galilean relativity were true (bottom, dotted). The speed of light was the same no matter which direction the interferometer was oriented, including with, perpendicular to, or against the Earth's motion through space. Image credit: A. Michelson / Michelson & Morley.

When the gold foil experiment resulted in high-energy recoils, it surprised Rutherford so thoroughly it was the most incredible thing to ever happen to him in his life. The leftover glow from the Big Bang was discovered quite by accident; the neutrino was a crazy hypothesis that many abandoned; and the discovery of the muon, perhaps the most unexpected particle of all, literally was met with a cry of, “who ordered that?” from Nobel Laureate I.I. Rabi.

The first muon ever detected, along with other cosmic ray particles, was determined to be the same charge as the electron, but hundreds of times heavier, due to its speed and radius of curvature. Image credit: Paul Kunze, in Z. Phys. 83 (1933).

These five discoveries changed the course of physics forever, but they came as total surprises to practically everyone. Sometimes, the answer is in the place you least expect.

”Light always moved at the same speed: c, the speed of light in vacuum.”

It’s probably because light has its own propulsion-mechanism. Think of a canoe vs. motorboat.

You can push the former and make it go faster; while the latter, that has its own propeller, keeps it’s own speed. The spinning blades neutralize the extra push.

”It was almost as incredible as if you fired a 15-inch shell at a piece of tissue paper and it came back and hit you.”

Again the same thing, it is probably because particles have their own propeller-mechanism. Think of two helicopter running into each other, where you have a small light toy helicopter that is blown back by a real on; and so it just returns to where it came from, or rotates backwards in the case of anti-matter.

”… radioactive decays have slightly less total energy in their products than in the initial reactants.”

An other thing that’s ‘normal’ if you look at particles as a propulsion-mechanism, and how you get a small jolt/bump when changing gears.

Having two helicopters smack heavily into each-other would have a similar effect, where some blades will shoot much faster away than the group-propulsion-mechanism.

”… they found uniform noise everywhere they looked on the sky.”

This one also wouldn’t be very surprising if we looked at particles as rotor-mechanisms. Think of curling waves in an ocean being tied together into propeller-mechanism-knot and all starting to take off, like a massive amount of helicopters taking to the skies. BBBbbrrrrrmmmm, BBBbbrrrmmmmm, BBBbbrrrmmmmm … and the noise you get. ?

"While the history we recount is filled with the success stories, real history is fraught with blind alleys, failed experiments, and outright mistakes."