The Science of the Brightest GRB

Last week, the brightest gamma-ray burst ever was observed. (See here.) I wanted to know what it was that caused this bright explosion that, despite it being at redshift z=0.94 (or about 7.5 billion light years away), it was visible on Earth with the naked eye!

Well, a scientific paper was written on the observations of this burst, named GRB 080319B, or the second GRB observed on 03/19/08. Let me take you through the highlights. First off, here's what it looked like, in gamma-rays (left) and the afterglow in the optical/UV (right): 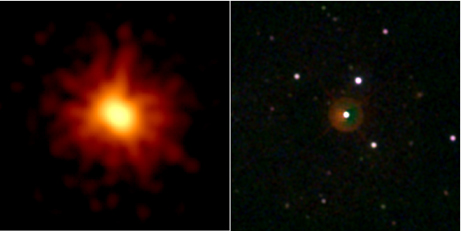 When we look from Earth, the faintest objects we can see with the naked eye are around magnitude 6, with smaller numbers being brighter. Well, the graph below (stolen from the linked paper above) shows how bright this is:

It weighs in, at its brightest, at magnitude 5.5 in the V-band (V is in the visible part of the spectrum). It's much brighter in gamma rays, but we can't see those with the naked eye. Now, that light-curve, fading over time, looks familiar to me. Why? Because I'm an astrophysicist and look at junk like that all the time. You know what it looks like? A supernova light curve. Let's dig one up and compare... 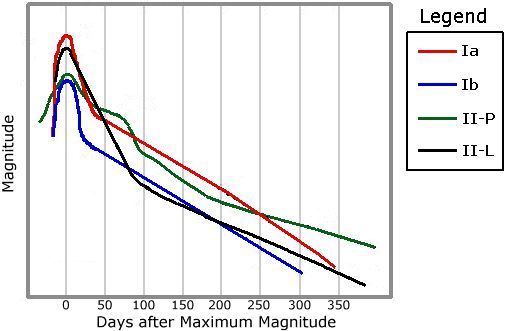 Well, don't those look similar? The major difference? The scale: this gamma-ray burst fades out much more quickly (about 10x as fast) as your typical supernova. 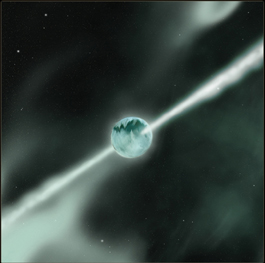 Does this mean it is or isn't a supernova? Well, the conclusion they reach in the paper is that it isn't just a supernova. It's most likely a very massive supernova that has very powerful, unusually collimated jets, one of which happens to be pointing right at us (see the image at right). The jet blast remains highly collimated for only a very short time, and that's why it appears to fade so quickly. This simulation shows what a supernova that creates a gamma-ray burst might look like.

Furthermore, this is a pretty typical gamma-ray burst in every way, except it looks like it's a little bit brighter than normal at the beginning. Here's a graph (also from the paper) that shows you what a number of gamma-ray bursts of the same type look like: 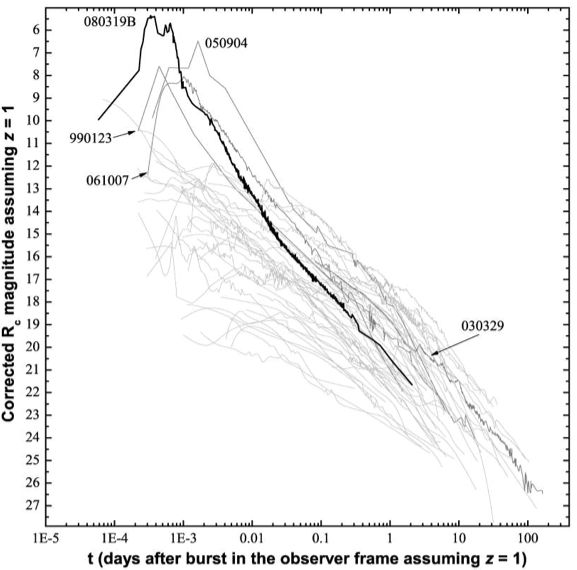 Sure, it's a little brighter at the peak, but overall it looks very comparable. That's why the theory is that the jet is just unusually tightly collimated. Now, why do I care? Or, rather, how is this relevant for cosmology? As a cosmologist, one of the most important things we're trying to figure out is the expansion history of the Universe. One way to do this is to measure an object's redshift and its distance. Redshift is easy, but distance is hard. The two ways of doing this are to either know the intrinsic brightness and measure the apparent brightness, calculating distance that way, or measuring the apparent size knowing the intrinsic size, and calculating distance that way. The first one is potentially useful for gamma-ray bursts, if we can figure out their intrinsic brightnesses. Why is this useful? Because gamma-ray bursts are brighter than the other things we know at high redshifts, namely, quasars and supernova. They have a graph about this in the paper, too:

The farthest things we've ever seen are at a redshift of around 7. How much better can gamma-ray bursts potentially do? Let's go to the article:

Finally, we examine the detectability of such events with current and future
facilities and find that such an event could be detected in gamma-rays by BAT out to z=4.9 (8σ), while the nominal EXIST sensitivity would allow detection to z=12.2. At K-band this source would have been easily detected with meter-class telescopes to z=17.

Holy crap, man. Redshift of 17? Are you kidding me? That's back when the very first stars were forming, before (we think) there were even galaxies. Keep working on figuring out how to determine their intrinsic brightness, because if we get it, this could be the most powerful tool for cosmology ever, and could measure dark energy far better than either supernova or baryon acoustic oscillations, which are currently our two best bets.