Comments of the Week #24: From cosmic unknowns to hidden supernovae

"When a star goes supernova, the explosion emits enough light to overshadow an entire solar system, even a galaxy. Such explosions can set off the creation of new stars. In its own way, it was not unlike being born." -Todd Nelson

Did you follow all the action this past week over at the main Starts With A Bang blog? With a new post nearly every day, we've really put together a set of amazing stories about the Universe we know (and are still discovering) for you, including:

There's been plenty to read, explore and think about, and -- as always -- we've set up synopses of each article here along with a place for you to leave your comments and have your say. Without further ado, let's jump in to the best prompts, questions and statements that you've given in this edition of our comments of the week! 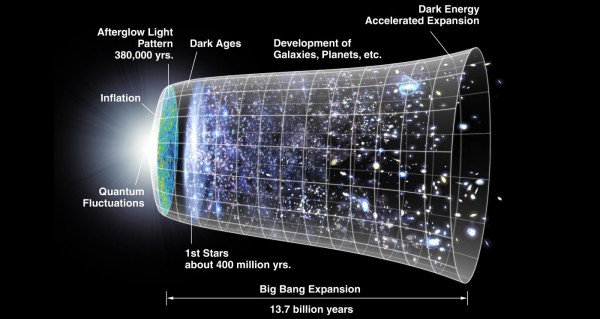 This is a really excellent point! Is it a contradiction? Let's examine more closely what we mean when we talk about the first stars in the Universe. Are you talking about when the Universe's ionization fraction began to rise significantly above the epoch where all atoms were neutral? Are we talking about a time where a significant portion of the Universe -- perhaps the seeds of where we now see galaxies -- have for the most part began forming stars? Are we talking about a time where a typical-magnitude density fluctuation grew into a star-forming region? Or are we, perhaps, talking about the time where the very first few stars in our observable Universe began to form: where we went from a Universe with zero stars to a Universe with more than zero? 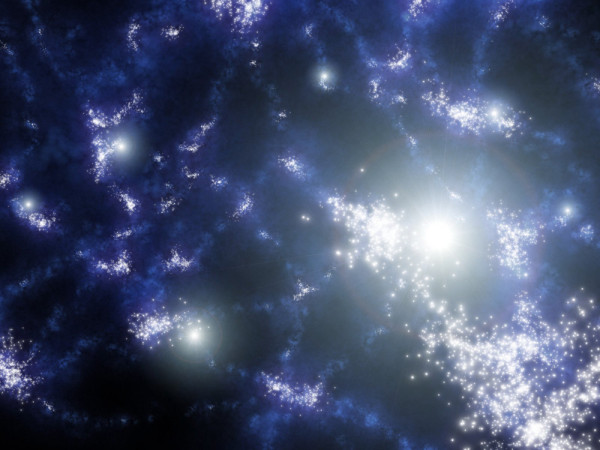 If you take the first definition, you're likely to get the ~400 million year figure that the NASA image gives. (There is strong evidence, by the way, that we already have the first galaxies by this time!) If you take the second definition, you're likely to get a shorter timescale, similar to what the Brock et al. image shows. But if you want to know about the very first stars in our Universe, even though that might mean that there weren't any within 10 million light-years of where Earth is now, you're looking at a timescale as short as 50-to-75 million years. I personally like this last definition the best, but I seem to be in the minority here. Regardless, these are some of the things that people consider when they talk about the "first stars," with the first two definitions being more interesting from the perspective of something the James Webb Space Telescope will conceivably be able to observe! 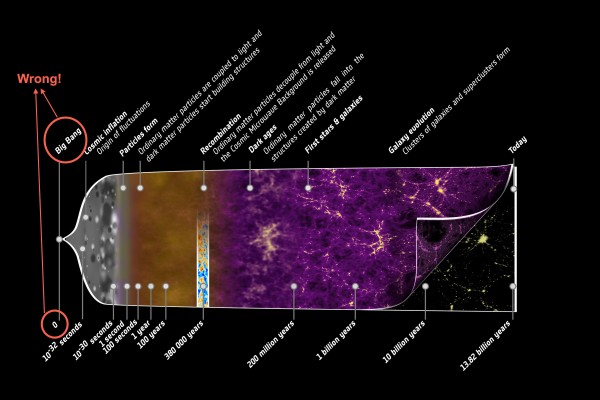 Image credit: ESA and the Planck Collaboration. Modifications by me.

From Mark Mahin on the Big Bang/Inflation question: "As far as I can see from studying this matter for decades, your “Big Bang after inflation” syntax is one that only you are following. What’s with that? The “Big Bang” is the very beginning, not something after the very beginning. Do you have some agenda of trying to explain the Big Bang by trying to redefine it as something after Time Zero?"

If you want to go ahead and think of an initial singularity -- that may or may not have existed, by the way -- as the Big Bang, I won't stop you. Go right ahead and use that as your definition. It was, after all, the only reasonable extrapolation for decades, up until the 1980s. But every physical cosmologist who came of age after the advent of cosmic inflation, and I'm sorry if I'm the only one you know, possesses the understanding that extrapolating our vast, sparse, matter-rich and slowly expanding Universe backwards to a hot, dense, radiation-dominated and rapidly expanding state has a limit, and that we can't go arbitrarily backwards to "t=0" as we once thought we could. 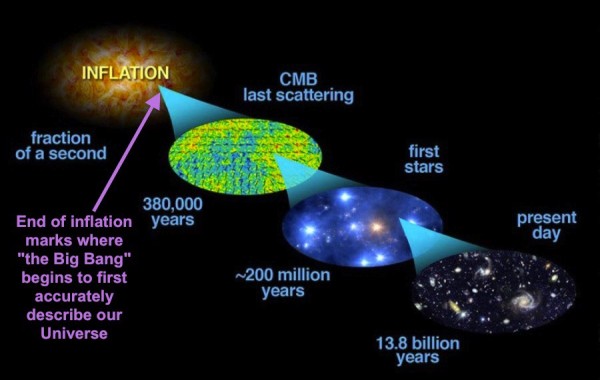 Cosmic inflation puts a cap on how far we can extrapolate backwards, and obscures whatever came before the final 10^-33 seconds (or so) of inflation. My agenda in this matter is the same in my agenda in all scientific communication: to accurately inform everybody out there what science knows about the Universe to the best of our knowledge. Yes, there are plenty of bad graphics out there -- many of them generated by NASA or the NSF -- that get the timeline wrong, but that doesn't mean you have to! 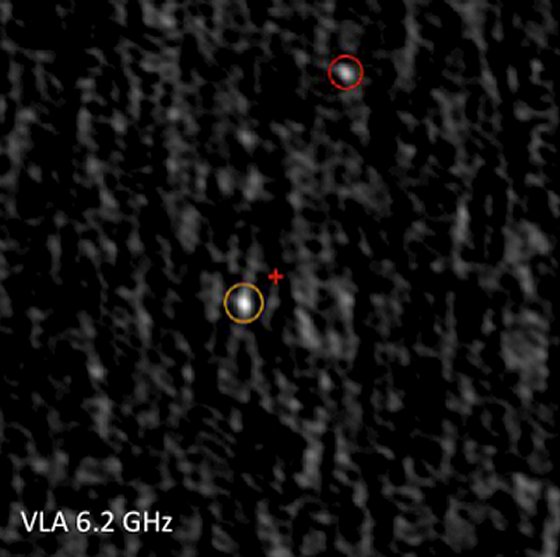 From Omega Centauri on the globular cluster M62 and its black hole: "So I take it it the the combination of a “noisy” environment, and the paucity of gas that means we can’t find most of these BHs."

The problem with finding black holes is that there are normally only two ways of doing so:

Think, for a minute, about what the environment inside a globular cluster is like. 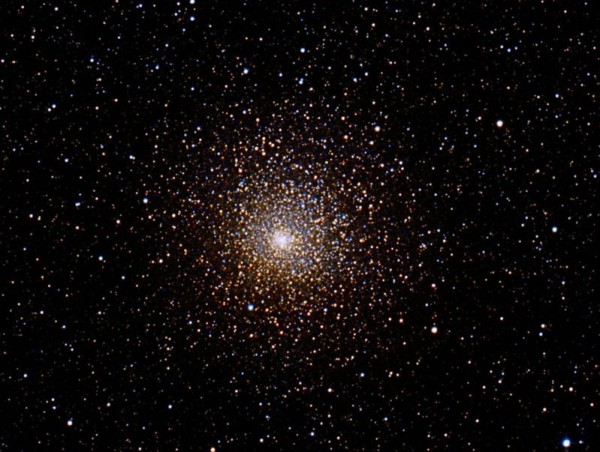 Image credit: Rick Beno of Conferring With The Sky Observatory, via http://www.conferringwiththesky.org/displayimage.php?pid=101.

It's gravitationally very chaotic, with anywhere from around 100,000 to millions of stars inside, so that your prospects of a stellar mass black hole having a notable and clearly identifiable impact on another star's orbit are very dim. These clusters are very old, having passed through the galactic plane many times, and as a result they've lost most of the matter that was once in their interstellar mediums. So unless you get lucky, and the black holes in there -- which should be ubiquitous, by the way -- happen to either devour a star, planet, or some very rare-and-fortuitous interstellar gas (or stellar ejecta), you're not going to have a radiation signal to detect. It's amazing that we can detect them at all, something that only became the case for the first time in 2007! But it will be a long time before we have a population census of black holes in globular clusters.

"One can have a continuous structure and yet be unable to resolve it beyond some limit, such as would be the case when the limit makes itself noticeable as a blur rather than a discretization. On the other hand, one can have a discrete structure that does not prevent arbitrarily sharp resolution, which can happen when localization on a single base-point of the discrete structure is possible." 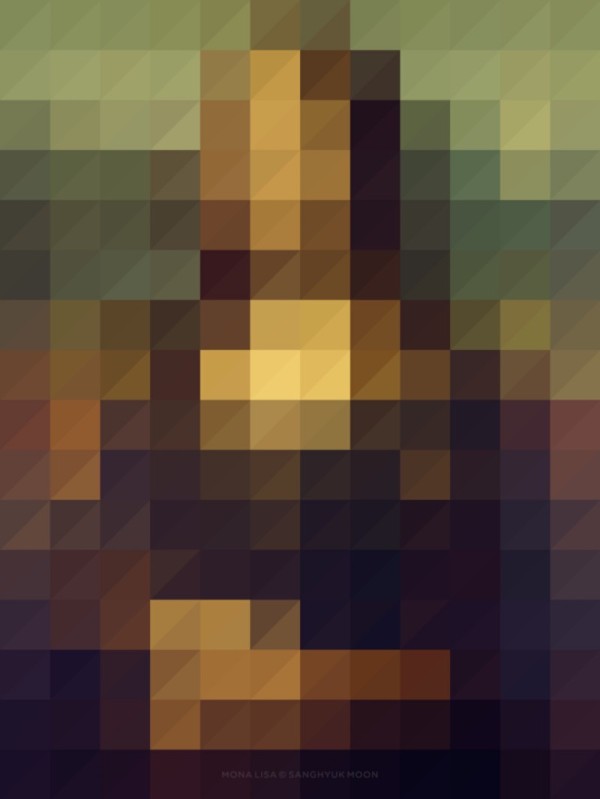 Now, your question, Bill, assumes that space is not continuous but is in fact discrete, and that there is a smallest possible scale that means nothing ever smoothly "moves" from one place to another, but instead "jumps" from one quanta to another. And you're asking, then, if it's necessarily true that if space is discrete like this, wouldn't time be as well? As best as I know, the answer is probably, but not certainly. Space and time may be on equal footing when it comes to treating them like dimensions, and they may transform together under the same rules. But just as space could be either discrete or continuous, time could as well, and with a view towards what Heisenberg states, there's no reason why one couldn't be discrete and the other continuous. Yes, it would be weird, but it wouldn't break any laws of physics, which means it's possible.

And finally, from Quentin Rowe on the story of structure formation in the Universe: "I know you’ve covered this before, but this article neatly wraps it all up, and has greatly clarified my understanding."

You know what? I know I do a lot of writing, and I know I bring up topics I've brought up before over and over again, always trying to include new perspectives, new pieces to the story and to bring in more detail and better clarity. I can't pretend that I always succeed or do a job that resonates with people reading it, but when I wrote this piece in particular earlier this week, I really thought it was one of the finer pieces I had written. I thought it told the story of structure formation in the Universe -- of where galaxies, clusters and great cosmic filaments came from (and how) -- in a comprehensive, accessible way that hasn't been told to a general audience before. 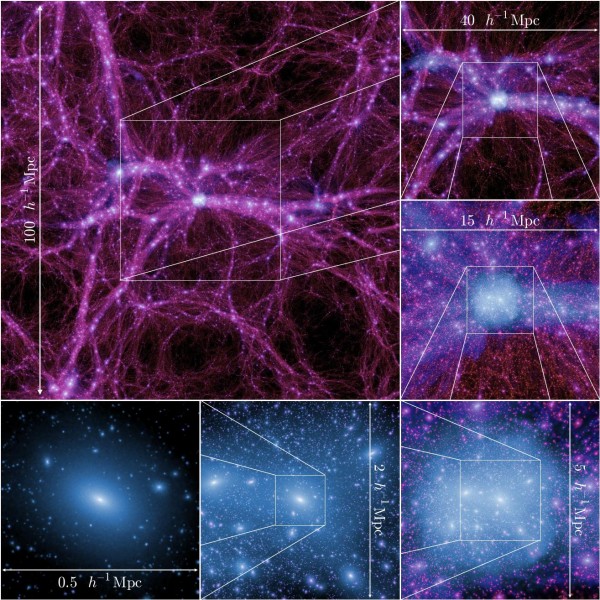 And yet very few people read it. So the fact that you liked it, and that it made sense to you, and made things more clear to you makes me happy, and I suppose there's no better way to end the comments of the week than with a little extra joy in the world. Thanks to everyone who shared their thoughts, and let's look forward to another great week together!