"Just the fact that you so desperately attempt to dismantle our theory proves that we are on the right track. Otherwise you would not feel so threatened by our theories!" -Giogrio Tsoukalos (in a letter to Jason Colavito)

Whenever we detect a signal that we can't immediately explain, it's a very human trait to ascribe our greatest hopes (or fears) to it. In the case of a peculiar radio signal originating from deep space, that means the wildest speculations will involve intelligent aliens. But as much as many of us would hope that such a thing would be true, the physical properties of these fast radio bursts, even though they're repeating, tell us otherwise. 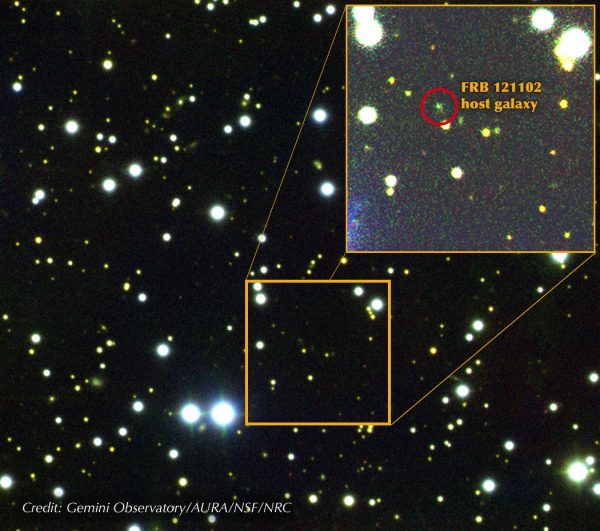 The host galaxy of these fast radio bursts is a dwarf galaxy with an active galactic nucleus. The stars within it, on average, have far fewer heavy elements (and hence, rocky, potentially habitable planets) than the ones in our Milky Way. Image credit: Gemini Observatory/AURA/NSF/NRC.

With an estimated 10,000 of them occurring on a daily basis, and with power some 10^19 times as great as the strongest radio signal ever generated by humanity, and with known astrophysical sources that can naturally generate signals of this magnitude and frequency, it's completely unreasonable to think this has anything to do with aliens. Still, the science alone is interesting enough to warrant not only investigation, but a remarkable sense of wonder.

A sequence of 14 of the 15 detected bursts illustrate their dispersed spectrum and extreme variability. The streaks across the colored energy plot are the bursts appearing at different times and different energies because of dispersion caused by 3 billion years of travel through intergalactic space. Image credit: UC Berkeley.
Tags
Astronomy
Scientific papers
Categories
Physical Sciences