A break from The Deep. In New watch, old watch, still the same I described the truely fascinating tale of me buying a replacement Garmin Forerunner 110. A few weeks ago I was faced with the replacement having the strap broken in a second place, and the glass having cracked when I incautiously thrutched a chimney having tied the watch to the back of my harness. I put sellotape across the crack, but it was ugly and it clearly wasn't going to stay waterproof on a long term basis.

I very nearly reflexively bought my fourth 110 (a bargain at about £80-90 now) but paused long enough to think of its weaknesses and wonder if I wanted a new one. And ended up deciding that I wanted a 610. So in case you care, this is my comparison. 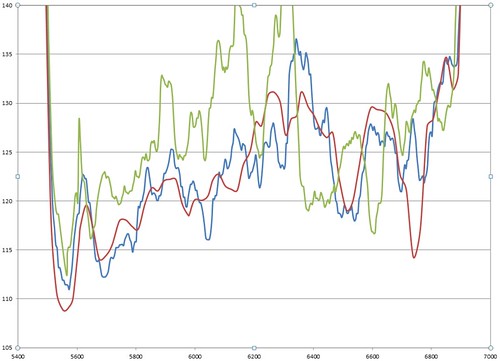 * Visually, slightly cleaner, though I'd prefer them to take the word "Garmin" off the front.
* Charging now gives you a clear %-charged, and who knows might even be accurate.
* I can now get instantaneous pace, as well as average lap pace. This is a major plus for rowing purposes. Update: but in use its still smearing / averaging the pace it shows.
* Being able to have customisable screens is very nice. I ended up with heart rate and pace last night.
* Recording to 1-second time is good too. See graph (vertical axis pace. Ignore the green line, that's a different piece. Ignore the absolute splits, I was subbing with the Ladies). I ought to do some more analysis on this, but I'm not convinced that either handles sharp changes well.
* Update: It will show you height - ha, I found this at last, it buried under "other" in the options screen. W00t!

* Upload is via the silly USB-Ant-stick, rather than via the USB cable. Idiots.
* The USB cable is different from the 110. Having had multiple 110's, I'm used to the luxury of a cable at home and at work.
* Still no height.
* The touch screen is OK, but is annoying while I'm getting used to it.
* The Garmin website smears 1-second data in the way it used to smear the 5-second, but worse. Not the watch's fault, I admit.

* The 610 is about £160, which is about twice the price of the 110.
* Its compatible with the old style heart rate strap.
* I was surprised to find the strap on the 110 breaking. I've used it pretty heavily, but it seems like a design flaw. Others have had this problem and some have solved it. If I hadn't cracked the screen I might try for a replacement. I did like I just cut the band off and used superglue to glue it to my wrist. It lasts about a week or 10 days depending and it doesn't slip around anymore. Hard to recharge, though.

I'm guessing this just has a GPS receiver in it? Altitude is notoriously full of error in these cheap receivers. If you added an air pressure sensor you might be able to track altitude reliably but then it is hard to make it water proof...

[The GPS height is actually quite good. I've used it while mountaineering - e.g. http://connect.garmin.com/activity/191974191 - and it got the summit height within 20 m. Which would be close enough to be useful. But it won't tell you that info until you download the trace -W]

re altitude, I concur with "gator's" comment about GPS instantaneous altitude being notoriously inaccurate. If it looks good "after upload", either they've averaged readings heavily or (more likely) they've mapped the lat/long measurements to a digital terrain map rather than plotting the device measurement. In the spirit of a climate blog, they've got the right answer only because they haven't used unprocessed raw measurements.

[I don't believe that. I could download the raw tcx to local disk before uploading to the cloud and compare the two, but I don't bother, because its really not believable that they would do the post processing you describe. Accuracy to within 20 m vertically is definitely useful for mountaineering: what evidence do you have for "notoriously inaccurate"? -W]

Simplistically, the physical reason for the inaccuracy is that GPS is based on differential measurements and there are no satellites in view below the receiver to common mode with the signal path delay variation in the vertical direction as there is in the horizontal. Dual frequency systems (more expensive, mostly military) do much better with instantaneous altitude measurement as do sensors with barometric aiding (some commercial handhelds and virtually all avionics receivers).

I was reacting more to the general concept of GPS sport watch accuracy. 20 m vertical is presumably useful for mountaineering. Short term 20 m error in vertical is problematic for someone tracking accumulated vertical over the course of a run. 20 m vertical ground relative error trying to land a drone may well result in a hole in the ground.

20 m 1 sigma (or bit better) you can get on a single second measurement, particularly if you were on a mountain peak with 360 degree horizontal sky view. However, if you were to stay at a constant altitude (rowing for instance) and dumped the data you would see variation in the altitude measurement over time with correlation over 10 minutes or so. This is an ionospheric propagation effect. If you were to go run around a 400 m track, you'd see this long term altitude variation, plus you'd likely get a position dependent variation as you go around the track due to signal blockage and multipath. This would be more pronounced if there are buildings or metal bleachers interfering with your sky view. Because of the last effect, the instrument designer has the choice of presenting an unfiltered velocity which is too noisy to be particularly useful or to present a filtered "average" velocity which is not going to respond well to quick changes in velocity or "smearing" as you put it.

Actually, all of those single band, ~$100-$500US are notoriously bad in the vertical as well as the horizontal.

To prove this to yourselves, take, not one but two, GPS data loggers, capture data at 1Hz for say 10 hours at the exact same location, dump into Excel, calculate the RMS in 1D (vertical), 2D (horizontal) and in 3D.

Now, take those two time series from the two GPS data loggers, take the difference, rinse and repeat, per above.

There are also multi-path issues galore, for single band GPS.

I did so about 5 years ago, satellites pop in and out all the time, long term measurement drift is atrocious in all dimensions. Even if you use two GPS data loggers.

MarkB is also wrong about dual band receivers being mostly military, you have real time kinematic GPS which is good to ~10cm RMS, mostly used for real time civilian navigation. Then you have DGPS which is accurate to ~1cm RMS, land surveying being the major use.

I've did DGPS measurements on large ships in navigation entrance channels at the Panama Canal, Charleston SC and Barbers Point HI about 15 years ago.

You have to be a little careful about the data taken if you're sitting still. I'd bet they've got a pinning algorithm to keep the position fixed if the receiver thinks you're not moving. You could try turning the watch on/off to see how the position varies. Or run around a track so you know you are coming to the same position and altitude and see what variation you get.

In any case, what may be crap for UAVs may be fine for running. :)

Yes any GPS software will attempt to "pin" to the underlying map database.

I always download the raw GPS data and pop in directly into Excel.

Also when I talk about two identical model GPS data loggers, I also meant that they are static, or in a fixed location/position.

To test the absolute accuracy you will need to occupy a known GPS benchmark, in an "of the grid" location, and located such that you have a clear horizon AND you are above the surrounding landscape in an attempt to minimize multipath issues.

Like I stated earlier, even data loggers, will use all available GPS satellites, and a minimum of four GPS satellites are required to obtain your location. Again, your raw data over long time periods will contain a variable number of GPS satellites over time, they drop in and they drop out.

I live in Vicksburg, MS, the maximum difference in elevation is like 60 meters, drive over to LA and it's like 5-10 meters. So for myself, those vertical locations are almost pointless, except for relatively short duration's when the GPS satellite constellation is most likely to be the ~constant.

Now the watch might have additional sensors, altimeter and/or motion sensors, but those are not true INS/GPS systems, a real INS will have, say a 3-axis angular rate sensor and a 3-axis accelerometer , integrate with a Kalman filter. Knock out the GPS constellation and your backup plan will always be INS, like it's been for the past, oh say ~100 years.

I believe certain GPS receivers are approved for flying precision approaches that rival or beat ILS systems. for a moving receiver where realtime altimeter readings are critical inputs to the autopilot, that's pretty good.

For watch bands, learn how to make 550 paracord bracelets. They work great for watches with large gaps around the pin.