Stories from the history of science: the discovery of the stratosphere 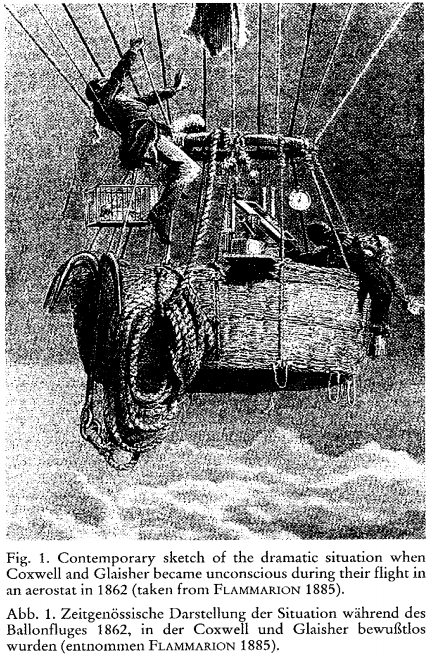 There are many others, of course. RMG has one just now on the Chandler wobble; there's Alfred Russel Wallace and the flat-earthers and the history of the word Scientist itself.

All of these have "mottoes", if you like; but I distrust them. There's a sci-fi novel from ages back, the only bit of which I remember is the protagonist taking the standardised psychometric proverb test: what does "a rolling stone gathers no moss" mean? He, free-wheeling, said "frequent change frees one from care" whereas his staid society wished him to say "frequent change prevents the accumulation of valuable possessions and disrupts the social fabric".

So I'll present the following story of "Stratosphere Denial" without any motto at all :-). This post is just to take the text out of PDF and into a form that it can be found; my namesake pointed out to me "the stratosphere denialists at the beginning of the last century", but it was news to me, and unless you know exactly where to look you won't find it on the wub (for example, GISS's article is thin at best. Anyone know of better?). Indeed, until I added it now, wiki didn't even have anything about the discovery of the Stratosphere at all (what's there is a bit rubbish, sorry, I couldn't be bothered to add much, but I did link to the major source I found).

By far the best, and practically the only source with any kind of detail I could find, was Hoinka, K. P. 1997. The tropopause: discovery, definition and demarcation. Meteor.Z., 6, 281-303 (via Geoff Vallis, Dept. of Mathematics, University of Exeter). So, what's it all about?

Skipping lightly over the heroic early stuff, such as depicted in the figure, people started sending up instrumented balloons, becoming serious around the start of the 1890's. Initially these were of laquered paper, or the charmingly named goldbeater's skin; lets throw in the name Léon Teisserenc de Bort at this point; remember, more details in the paper. These were constant-volume, and so ascended to a certain height then stopped, which was annoying as they'd then drift for ages before falling down and being recovered, or often not. Around 1900 the also charmingly named Richard Assmann (which, surprisingly, is safe to type into Google) worked in a characteristically thorough German way with Continental in Hannover to pioneer rubber sounding balloons, which expanded as they rose until they popped, and don't suffer from reduced ventilation.

If you've read any of the many accounts of making accurate near-surface temperature observations via Stevenson screens and the like you'll know about the importance of ventilation and exclusion of the influence of radiation; these is even more of a problem in the upper air, obvs.

There's a certain amount of Franco-German rivalry, or simply personal rivalry, but also international co-operation with simultaneous ascents. And, measurements start to show that whilst the air gets colder as you go up, as everyone expected, up to about 10 km; above this there's an "isothermal layer". This wasn't expected. But, hey; it was quite hard to get a balloon up there, there was a dead good explanation for why you expected temperatures that were too high (lots of solar radiation, and reduced ventialation as the air got thinner and the balloon got to its max height and slowed). So people just "corrected" the anomalous temperatures back to the expected lapse rate. Naturally, you can solve the solar radiation problem by doing the ascents at night, but likely the extra logistics of doing this put people off a bit1, though it was done.

But over the next few years the measurements kept coming out the same, and eventually people came round to the view that there really was an isothermal layer, with 1902 being the year in which both LTdB and RA published announcements. Reading somewhat between the lines of the paper, it looks like LTdB got far more results than RA (236 flights above 11 km, 74 above 14 km) versus 6 for RA above 11 km, despite the nominally superior tech of the Kraut. Perhaps a case of lovingly and painstakingly hand-crafted stuff that's been found to work OK being quite hard to beat by innovation2, though it tends to lose in the long run. There's another motto which I won't draw out :-).

1. Launching the things at night would be a bit of a pain, obviously. Just organising people for night time is harder, and so on. Also it makes tracking and retrieving the balloons harder (depending on how long a flight was, I suppose).

2. Re-reading the paper more carefully, it really isn't clear whether LTdB used paper and RA rubber; or both used rubber; or LTdB slowly switched. Section 2.5 says that after rubber was introduced, their use rapidly spread, and LTdB "started to use them during the first years [of the 1900's]". However, the announcements were in 1902, so I suspect LTdB was mostly still on paper.

* Discussing What are universities for? with Mike P-J.
* Use of the proverbs test for differentiating schizophrenics from normals, D R Gorham, J Consult Psychol. 1956 Dec;20(6):435-40.

To refresh your memory re: Benjamin Proverb Test as used in science fiction, see:
http://en.wikipedia.org/wiki/We_Can_Build_You

[Thanks! And that lead me to http://tonyjack.org/files/Gorham_Donald_R_1956_original_proverbs_report… -W]

Lest we forget, Betrand Piccard,, the grandson of the stratosphere's first explorer, Swiss physicist Auguste Piccard , is about to attempt the first non- stop solar powered flight around the world..

@William Quinn:
Actually, it seems the Proverb Test was one personal favourite of Philip K. Dick, it also used in The Transmigration of Timothy Archer, though in this case somewhat more akin to the original intention; we have already learned somebody's son is schizophrenic, but when he is introduced, he appears as a kind and sensible though somewhat off person, and the protagonist wonders what all the fuzz about his mental state was about and if it was more of psychiatry hurting him, mind you that was late 70s in California, on the peak of anti-psychiatry. Though as mentioned, the conversation seems somewhat off to her, maybe what some psychiatrists would call "the precox feeling"(note the similarity to Dick's "precogs"). And then the protagonist applies the proverb test:

"I'm going to ask you a question," I said. "In return. I'm going to give you a proverb, a common proverb. If you are not familiar with the proverb-"
"How much time will I have?"
"This isn't timed. Just tell me what the proverb means. 'A new broom sweeps clean.' What does that mean?"
After a pause, Bill said, "It means that old brooms wear out and you have to throw them away."
I said, " 'The burnt child is afraid of fire.' "
Again he was silent a moment, his forehead wrinkling.
"Children easily get hurt, especially around a stove. Like this stove here." He indicated my kitchen stove.
"'It never rains but it pours.'" But I could tell already. Bill Lundborg had a thinking impairment; he could not explain the proverb: instead he repeated it back in concrete terms, the terms in which it itself had been phrased.
"Sometimes," he said haltingly, "there's a lot of rain. Especially when you don't expect it."
"'Vanity, thy name is woman.'"
"Women are vain. That's not a proverb. It's a quotation from something."
"You're right," I said. "You did fine." But in truth, in very truth, as Tim would say, as Jesus used to say, or the Zadokites said, this person was totally schizophrenic, according to the Benjamin Proverb Test. I felt a vague, haunting ache, realizing this, seeing him sit there so young and physically healthy, and so unable to desymbolize, to think abstractly.
He had the classic schizophrenic cognitive impairment; his ratiocination was limited to the concrete.
You can forget about being a computer programmer, I said to myself. You will be spray-painting low-rider cars until the Eschatological judge arrives, and frees us, one and all, from our cares. Frees you and frees me; frees everyone. And then your damaged mind will, presumably, be healed. Cast into a passing pig, to be run over the edge of a cliff, to doom. Where it belongs.
"Excuse me," I said. I walked from the kitchen, through the house, to the farthest point from Bill Lundborg possible, leaned against the wall with my face pressed into my arm. I could feel my tears against my skin-warm tears-but I made no sound.

Might be a somewhat personal interest with Dick, given both his fear of "losing it" himself and his acquaintance with quite a few "troubled" persons...