There is no land on an aqua-planet

Something of a classic, from Richard Telford. He's discussing Soon's Heartland presentation. Here's a screenshot: 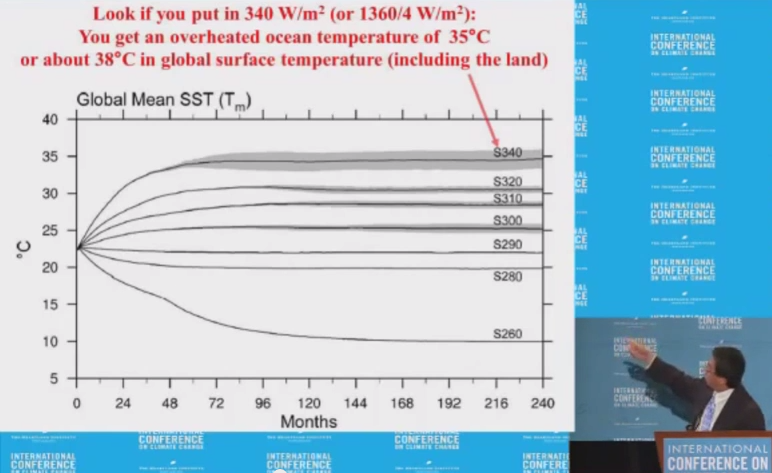 Soon is trying to point out the importance of the value of the solar insolation, which he believes needs to be heavily fiddled to make the GCMs come out right. To prove this, he's chosen a paper about an aquaplanet experiment. Aquaplanets themselves are a perfectly respectable thing to do: they offer you a heavily simplified "planet" with no irritating land-sea constrast, or orography, to get in the way of your dynamics (it also simplifies the variability, so you get regular results over much shorter time periods). Soon wants to emphasise how unrealistic the temperature is, so he pulls out the highest global average value - 35 oC - and then adds a made-up 3 oC on top of that to get an entirely fictitious 38 oC.

Its not really clear if Soon is deliberately lying, or just clueless, but denialist drivel doesn't get much worse.

[Update: so, the WAPO says the Smithsonian says Soon is “a part-time researcher at the Smithsonian Astrophysical Observatory,” and the institution is “greatly concerned about the allegations surrounding Dr. Willie Soon’s failure to disclose funding sources for his climate change research.” The acting secretary of the Smithsonian, Albert Horvath, “has asked the Smithsonian Inspector General to review the matter.” There's a twit-pic of this but oddly the Smithsonian press page doesn't have it (archive). But their FB page does (h/t Eli).]

Not that that will stop Watts and the rest of the usual suspects, including Lubos-- this time string theory actually comes into play ! .

Having endured the single stupidest poster talk explication from the good Dr. Soon at an AGU conference, Eli votes for clueless

[Thanks. So its on twitter and fb, but not part of their regular "news" output. Is this just an oversight? -W]

Russell, now where has Eli heard that before. Some familiar names there too

Thanks, Eli- I was away on business in the Oort Cloud at the time.