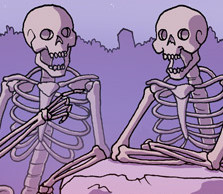 The long slow wiki edit war over exactly what sort of denier AW is continues - RationalWiki is more informative - but the issue of surfacestations.org remains untouched. Is it alive? Dead? Undead? Having browsed around a bit I can't find anyone saying - or, indeed, caring - but being a caring sharing sort of individual I thought I'd poke it a bit.

http://www.surfacestations.org/ is unpromising: NEWS Updated 07/30/2012 New paper in process, see details here. NOTE: Surfacestations.org gallery server has received heavy traffic and some attacks in the last 24hrs. The online image database aka gallery server site has been put into safe mode to secure backups and make it more secure. The "paper" in question is of course the still-born one, still dead after all these years. The online database page promises "We have a growing online database of USHCN, GHCN, and GISS station site surveys on our high speed database server" but the link to http://gallery.surfacestations.org/main.php times out. The last time it was alive appears to be April 2014; by June 2014 it was "Site is temporarily down for maintenance", which is more than it manages now.

So, does anyone know: it is "officially" dead? Just not the kind of thing people mention in polite company any more? Or something else.

It must live forever, being motivated by love of good science rather than denial.

But maybe EJ can appear and enlighten us.

Hey, but the beta version of UAH v. 6.0 has finally been released, so sometimes some of that community do actually finish their long-promised projects!

Confirmation that skeptic blogger Anthony Watts is part of Heartland’s funded network of misinformation communicators.
“We have also pledged to help raise around $90,000 in 2012 for Anthony Watts to help him create a new website to track temperature station data.”

surfacestations.org just isn't needed now -- the data, whose quality it contested, miraculously became good enough to show "the Pause." Now that surface warming is picking up again, the data will again go into dispute/denial and the site will be rekindled.

It's just tired and shagged out after a long squawk.

Or maybe pining for the fjords.

Will web temperatures fall if we wear white in mourning ?

Wasn't the surface stations project defunct after a rapprochement with the data gathering bodies and a Koch funded study that showed the poorly sited stations had little impact on the data set?

William,
Past marathons have brought a burst of creativity and perspective in your posts. This one. you seem mired in a trivial pursuit of WUWT.

[I thought I'd been mostly ignoring WUWT. And this, isn't -W]

"Wasn’t the surface stations project defunct after a rapprochement with the data gathering bodies and a Koch funded study that showed the poorly sited stations had little impact on the data set?"

No, AW rejected BEST and floated a proposed paper supposedly showing that the US surface station trend was inflated by a factor of two due to poor siting about a year after BEST was released.

Well, "no", in AWs mind. Normal people agreed with your statement.

So the latest from AW is that the surface stations project has enabled him to cut the US land-based trend by a factor of two. The first paper floated had such severe problems that even the denialsphere had to admit it was flawed.

But they've been working on it. AW delegated the work to Evan Jones (thus the "EJ" reference in the first comment) who spend months here and elsewhere proclaiming that fixing the errors in the paper simply reduced the trend more.

But no paper has surfaced.

"William,
Past marathons have brought a burst of creativity and perspective in your posts. This one. you seem mired in a trivial pursuit of WUWT."

Trivial pursuit of work (indirectly backed by RPSr) that they've claimed they'd publish in an impecable leading journal, pointing out that the fundamental basis of the observational record is false, and that the real trend in warming in the US is no more than half of what science tells us ...

Trivial? Really? If they're successful in overturning decades of analysis of the surface record and having it accepted by the scientific mainstream because their work is impeccable, they'll be showered by accolades, including from the scientific community.

surfacestations.org reminds me of The Onion's parody of Friendster, a long abandoned internet civilization. Only old posts remain, trapped like flies in amber.

With Manbearpig's minions pouing asphalt ever closer to vital thermometric outposts in the Patagonian marches, we need Willard's blog to defend the Americas from the rising tide of penguindom threatening our allies in the Southern Cone-- never forget that every serration of the false Paraguayan temperature peak is a dagger aimed at the heart of Antarctica.

WMC, you should start an annual "Sentence of the Year Award". I nominate Russell's contribution above.

[Russell should have written for Python -W]

Greg gives me too much credit- Patgonian weather weirdness has been with us ever since the late great Mike Crichton spiked State of Fear's end notes with contrasting temperature outliers from the hot and cold hinterlands of Cerro Torre.

Not that Naomi's footnotes are an improvement.

i havent calmed down.

well we are coming up on three years.

During that time I have periodically asked Anthony for the data and the asnwer is the same. They are triple checking everything. paper is done.. blah blah.

A while back I reverse engineered which stations had been reclassified.. digitizing figures he has posted. In the end I wasnt 100% sure of everything so I Asked Anthony for a sample of his reclassifications. i wanted to see if I could build a classifier ( with 30 meter satellite data) and then use the sample to predict the rest.. he said no.

To discuss the substantive issues.

Micro site bias would appear to be a real concern, and the classification system was changed. However, LeRoy never did complete documented field tests. The value CRN1,2,3,4,5. Dont refer to temperature Bias as Watts claims. I exchanged some comments with LeRoy's co worker who in broken english explained that the actual measure bias ( in small tests) was on the order of .1C. But that the maximum spike you could see was 1,2,3,4 degrees C.
That is you might see such a spike periodically. basically instead a mean bias you'd see a noiser signal from poorly sited stations. That is what the one guy who did any tests wrote. So, you have a standard that was put together with good reasons.. but there is no test to back it up, no published test.

dont get me started..

[Thanks for the comment. If you're on somewhat better terms with AW than me, perhaps you could ask him if the project, or website, is dead, moribund, or "just resting"? -W]

That was real shame. The project would actually have been helpful. The tough work of decoding the incoming streams was done, but the back end stuff wasnt complete.

Is it possible to get a hold of the emails so we can see exactly what was happening?

@"[Thanks for the comment. If you’re on somewhat better terms with AW than me, perhaps you could ask him if the project, or website, is dead, moribund, or “just resting”? -W]

I can try. I suspect he will say its just resting.

"Is it possible to get a hold of the emails so we can see exactly what was happening?"

Ask Gleick.
It was seriously nothing. every day there are certain stations that report via a satellite feed. the data is then QCed, and then posted ( a day late). So the project was reading the feed and making the raw data available. The first half of the money was to decode the stream, other half to build the web site.. ( vaguely recalling)

given the huge volume of data and given the changes that happen at every stage it would have been a source of constant "why are they doing this or that" meh...

So, nothing to add about the problem of septic tank seepage?

[I think I've pretty well avoided talking about the "hiatus", on the grounds that its overblown; I then to agree with Tamino -W]

So, nothing to add about the problem of septic tank seepage?

Thanks for the link, Hank, that's a thought-provoking post. I'm looking forward to reading the paper it was based on.