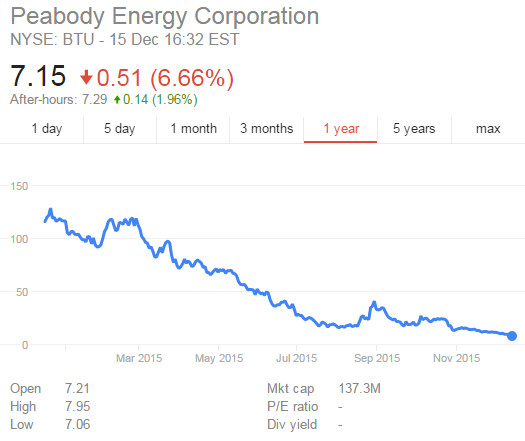 The Graun said In the aftermath of the Paris agreement, shares in coal firms plunged rapidly. Peabody, the world’s largest coal firm, saw stock values drop 12.6%, while Consol Energy holdings was down by 3.3%. That's interesting; one of the things I wondered about the Paris pow-wow was how the markets might take it. But this being economics in the Graun it needs checking; the linked article Paris climate pact sinks coal stocks, lifts renewable energy seems to fit, but we should look closer. See my image.

This is a stock in long-term decline, possibly because of the impacts of GW, but not because of anything that happened this week. On that scale, you can't even see the "rapid plunge". Console also seems to be in long-term decline, though not by so much. If you look at the week-view you can see a drop on Monday; but you can also see a bigger gain the previous Thursday.

* Climate deal: Carbon dated? FT: Pilita Clark in Paris: "Paris accord will not solve global warming but may spur renewable energy funding and hit fossil fuels". But its wurbly.
* And then there was one. So, one more to go - Brian at Eli's on Arch Coal bankruptcy.

*On that scale*, you can’t even see the “rapid plunge”.

William's graph brings up a cause and effect issue, in that the causes driving coal's decline could be the same that facilitated the Paris agreement.

I'd like to see more evidence than what the Guardian has. KOL ETF, kind of like an index for coal, had a bigger decline on Friday, and climbed back today from yesterday's decline.

I expect winter weather, the economy, and turmoil in the Republican presidential race will drive coal prices more than Paris.

[Thanks; I'm not familiar with coal stocks. KOL did indeed fall on Friday (I presume then rather than Thurs due to NYSE open times). But Peabody has fallen more:

News suggests long-term decline for the obvious reasons: GW/regulation; competition from nat gas from shale; lack of demand from China. Its hard to see why you'd want to own any of these stocks, which must be "bad" for long term investment in the industry -W]

Since coal burners are being turned off in the USA and extraction costs may be going up and little can be exported...

Peabody stock has been in decline for several years. I would think it has more to do with pressure from low cost natural gas resulting from widespread implementation of hydraulic fracturing techniques than from direct environmental concerns. There is no shortage of coal advocacy in the US, but gas is cheaper and no amount of lobbying is going to change that.

It looks to me as if Peabody opened Monday down nearly 10% on Friday's close. No, you can't see that 10% on your six-month chart, but it's not nothing either.

Big Coal also has horrible balance sheets with massive debt, partly due to ill-considered mergers and other things not immediately related to environmental concerns. I'm not certain but I think the bonds of every major coal producer have been "junk" grade for a while now.

Off topic: You may wish to check through all your back posts to make sure you are not, in fact, a new kind of denialist, WMC.

[I'm a touch dubious about Oreskes. But perhaps I should take up her challenge -W]

Arch Coal has completed its fall by declaring bankruptcy.

It turns out the calls for divestment in fossil fuel stocks were exceptionally good investment advice regardless the motivation :)

Just you wait -- the public health folks are starting to make a fuss about the dumping of toxic waste under the guise of "fracking fluids" -- undisclosed materials.

It'll take years to stop that (as underground dumping is such a terribly convenient and not yet illegal way to get rid of the horribly expensive toxic crap).

Once it does it'll add enough to the cost of fracking to push coal back into the economy again.