I haven't read the paper (Observed Arctic sea-ice loss directly follows anthropogenic CO2 emission; Dirk Notz and Julienne Stroeve; Science 03 Nov 2016: DOI: 10.1126 / science.aag2345), of course, because it is paywalled. Curiously, it doesn't seem to have made anyone else's blog (a paper about sea ice in Science, and everyone ignores it like it was in poor taste or something?). But I found U.S. and German researchers calculate individual contribution to climate change which offers us the immortal quote

“The observed numbers are very simple,” Notz said. “For each ton of carbon dioxide that a person emits anywhere on this planet, 3 square meters of Arctic summer sea ice disappear.” “So far, climate change has often felt like a rather abstract notion,” Stroeve said. “Our results allow us to overcome this perception. For example, it is now straightforward to calculate that the carbon dioxide emissions for each seat on a return flight from, say, London to New York cause about 3 square meters of Arctic sea ice to disappear.”

The study also explains the linear relationship between CO2 emissions and sea ice loss. “Put simply, for each ton of carbon dioxide emission, the climate warms a little bit. To compensate for this warming, the sea ice edge moves northward to a region with less incoming solar radiation. This then causes the sea ice area to shrink. Simple geometric reasons cause these processes to combine to the observed linearity,” Notz said.

I'm delighted that it has all turned out to be so simple. Imagine all those poor fools who have worked so hard to understand climate all these years, and yet it turns out in the end to be a simple linear relationship between emitted CO2 and temperature; and then linear between temperature and sea ice. Duh. And how convenient that the sea ice "compensates" for the warming.

[Update: thanks for the dodgy link to the paper in the comments, and an anonymous admirer who sent me the paper direct.

Some parts of it seem little more than propaganda: First, the observed linear relationship allows us to estimate a sensitivity of 3.0 ± 0.1 m2 of September Arctic sea-ice loss per ton of anthropogenic CO2 emissions during the observational period 1953–2015. This number is sufficiently intuitive to allow one to grasp the contribution of personal CO2 emissions to the loss of Arctic sea ice. For example, based on the observed sensitivity, the average personal CO2 emissions of several metric tons per year can be directly linked to the loss of tens of m2 of Arctic sea ice every single year. I'll say no more about that.

Secondly, the idea that the models are rather iffy on the sea ice so you can glean useful information from an empirical study is reasonable. What I'm much less inclined to think reasonable is to extrapolate it so far out. They are very fond of the word "robust" but do no more than hand=wave to support it.

Third, they seem to forget that they don't know the future: Evaluating the simulated sensitivity, we find that most CMIP5 models systematically underestimate the observed sensitivity of Arctic sea ice relative to anthropogenic CO2 emissions of 3.0 ± 0.3 m2 (see table S1 for details). Across the full transition range to near ice-free conditions, the multimodel mean sensitivity is only... We don't know what the sensitivity is all that far down,because we have no obs. And if you don't trust the models, as they don't, you can't use those as evidence. So their certainty here is weird.

Fourth, although they insist on looking at spaghetti plots including rubbish models, it is quite plain that lots of models *do* have sensitivities that match the obs. A more fruitful approach might have been to sub-select the models by how well they match the obs instead of using the rather mindless approach of just looking at all the CMIP models.

There's a bit where they remember (probably the referees reminded them) that radiative forcing is logarithmically, not linearly, related to CO2 concentration. But rather than re-do their analyses they dance some words around.

On the other hand this also explains why the linear relationship does not hold in the Antarctic, where dynamical forcing from wind and oceanic heat transport are key drivers of the large-scale sea-ice evolution - it is good that they remembered to say this. it would have been embarrassing to have constructed an "explanation" that failed in 50% of the cases it was applied to.

I didn't find their "simple linear model" terribly convincing, but then again I didn't bother to read it in details so that's hardly a fair judgement. So, meh, I still don't really like it even have skimmed the real thing now.] 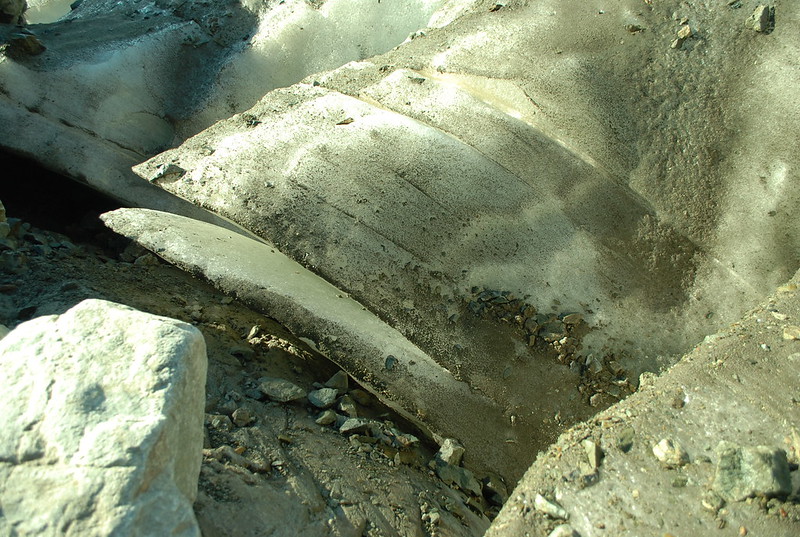 (Border of the Glacier Blanc, Ecrins) 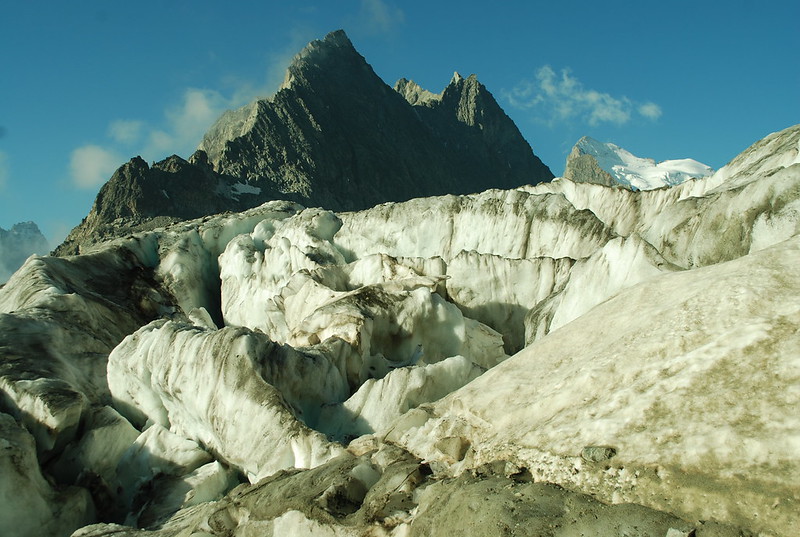 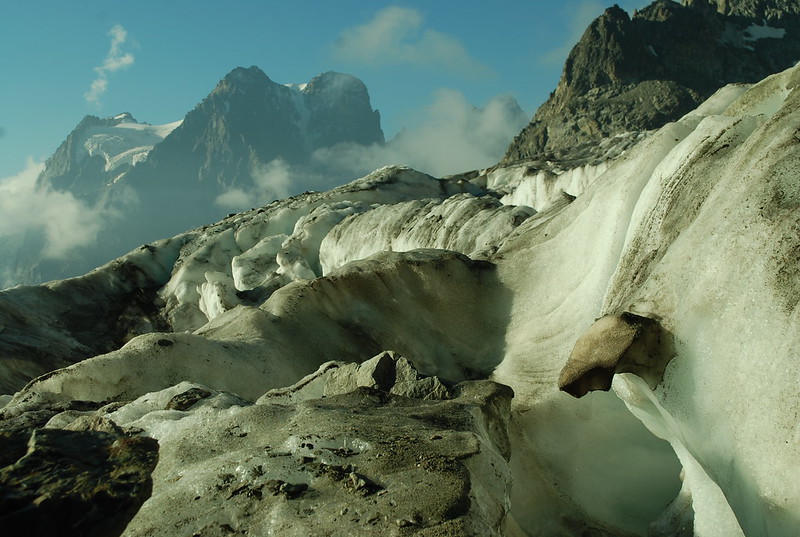 I have had a quick look at the paper and - as far as I can tell - there isn't any kind of formal attribution analysis; it's simply what appears to be a correlation between emissions and Arctic sea ice extent. It's quite possible that it could be about right, but I can't see how you can rule out internal variability as having played some kind of role. Another possible issue is relating it to area, rather than volume. I guess the loss of sea ice area does impact albedo hence energy balance, but the excess energy that is going into melting sea icea is really reducing the amount, rather than simply the area.

I thought everyone knew about this? No excuses!

[Thanks. I'd heard of it, this is the first time I've seen it. Now I'll have to read the bloody paper, sigh -W]

What, no role for Cthulthu?

If Kevin makes sacrifice, the Ancient Ones of R'iyeh will conjure up the epoch when Sophisticated One Dimensional Models walked the Earth ,

But while Twiggy is robustly alive and living in Chelsea, sophisticated one dimensional Fortran radiative forcing models have been cast into the realm of the dead and undreaming, for they are prey to wonky parameter selections.

Fortunately , while Notz & Stroeve have risked the wrath of great Cthulhu's by sticking the dread word Robust in front of Linar Relationship in their abstract, they have wisely left open a path of retreat the Mountains of Madness:

"Unfortunately, while indicative of a TCR at the higher end of simulated values, the correlation does not allow for a direct estimate of TCR for two reasons: First, the loss of Arc- tic sea ice is more directly driven by the regional tempera- ture rise in the Arctic rather than the global temperature rise that is expressed by the TCR. Any failure of the models to realistically simulate the ratio between global and Arctic temperature rise, usually referred to as Arctic Amplification, could hence lead to an erroneous quantitative estimate of the TCR based on the correlation that we identify. Second, TCR is estimated from simulations where all non-CO2 forc- ings are kept constant, while the non-CO2 forcings change in the historical and RCP8.5 simulations that we consider here. This affects at least to some degree the robustness of the correlation (see Supplementary Text for details.)"

But I guess still dull as still near the low edge?

[Nooo... it is interesting. But it will either be more interesting in a month, or less -W]

The robust claim seems odd to the extent it implies confidence in a future relationship, but OTOH I don't blame scientists for trying to figure out new ways to present data so that those who would be far better off having started to pay attention years ago but decided not to because inconvenient now begin to pay attention even though still inconvenient. (Snark aside, I really do sympathize.)

Current low sea ice will remain just as interesting, although if it persists it will become even more so. I don't think anyone expects this to continue all winter.

"... North America’s most astonishing warmth this week has focused in Canada, where temperatures have been up to 30 degrees warmer than normal...."