Time to start watching the Arctic Sea Ice breakup. This happens every year, but as you know, the total amount of ice left each summer has been reducing, and the "old ice" which forms a basis for the arctic ice refreeze is disappearing. The result of this change in arctic ice patterns has been a shift from one form of "arctic oscillation" to another which has resulted in changes in Norther Hemisphere weather.

Here's a new video by Peter Sinclair bringing you up to date on sea ice as well as sea ice melt denialim:

The National Snow and Ice Data Center keeps track of the Arctic ice and regularly updates a graphic that shows us how it is tracking. This year's Arctic sea ice has recently peaked. This year's track has been following close to or below last year's track, and both years are art or below 2 standard deviations below the 1979-2000 average. Here's the graph: 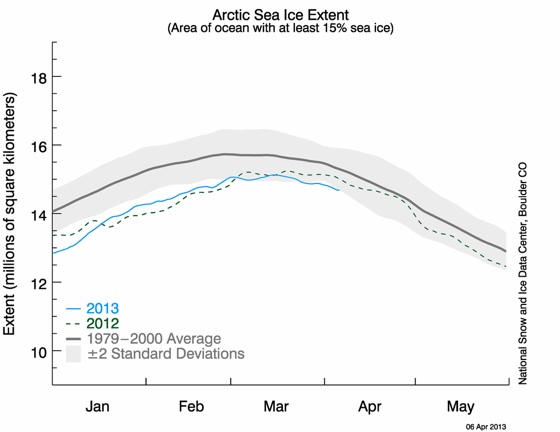 2012 was a scary year for arctic ice extent. If 2013 ends up just as bad, denialists will no longer be able to argue that the ice is all going to come back. But they will argue it anyway. Wait for it......