The problem of evil

"Offend Every Religion and Non-Religion Day"

stoat | May 21, 2010
Brian says it is draw Muhammad day so here is a nice pic I found: I'm afraid I don't know the original source - it looks to have been a Frog (this *is* offend everyone day, isn't it?) - oh hold, on, it is Plantu. I've delicately altered the original, I bet you can't tell where :-). Olde Atrichoke points me to "Jesus and Mo" which has a nice gentle one about excess internet usage, one for the climate-y folk about Denialists. And then there is Today's. Predictably enough this offends the wackos which I presume is the point - to try to tire them out. Also predictably enough, there is a wiki…

It's Rough Being the Easter Bunny

grrlscientist | April 3, 2010
tags: cartoon, easter, humor I know this cartoon is as old as I am so you've all seen it a hundred times already, but it never fails to make me laugh, so I am sharing it with you anyway.

grrlscientist | March 13, 2010
tags: art, humor, cartoon Some of you might be aware that the roughhousing at ScienceBlogs has been noted and cartooned by the extremely talented Joseph Hewitt. Unfortunately, I was overlooked in the cartoon so I made a comment on his blog, Ataraxia Theatre, about sending my flock of attack parrots after him. My parrots caught up with him early this morning (the middle of the night, Joseph's time) and so you can see the result. He did not finish his cartoon of me in time to stave off their chomping beaks of death, so his blood was split before I managed to call them all off. His poor well-…

grrlscientist | December 21, 2009
tags: Santa Claus, Santa the Fascist Years, comedy, humor, funny, satire, holidays, Christmas, politics, streaming video We all think of Santa as "Jolly ole St. Nick." But who knew that he has a dark hidden past that's very un-jolly? This short film uncovers and explores Santa's flirtation with politics and ...

But the Cat Came Back

grrlscientist | October 2, 2009
tags: art, humor, satire, But the Cat Came Back, Canadian cartoon, streaming video I've never seen this cartoon before today, but it's a classic Canadian cartoon that my spouse watched when he was a kid. So he introduced it to me. 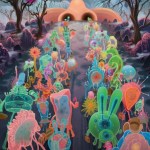 The microbes go marching up your nose, hurrah hurrah

bioephemera | April 27, 2009
This air purifier ad from Sharp is a little creepy, in a Spongebob Squarepants way. I love how you can see their fluorescent organelles! Unfortunately I don't see anything here that resembles a virus, but with swine flu all over the news, this serves as a good reminder to wash your hands. Ad by Takho Lau for ad agency M&C Saatchi of Hong Kong. Found via Next Nature

New theory on why there are no transitional fossils

Farewell to The Worst President in History

grrlscientist | December 30, 2008
tags: farewell GW, John Sherffius, politics, humor, comedy Image: John Sherffius, 28 December 2008 [larger view]. Read the fine print, if you can (and you really aren't expected to be able to read it), then tell me what you think of the current resident of the White House.

Cats are to Intelligence as Kryptonite is to Superpowers

grrlscientist | November 19, 2008
tags: cartoon, humor, funny, pets, cats Image: XKCD. I am staying with a cat named Jack in Helsinki, and of course, this means I am redicovering something about cats I'd forgotten, but this phenomenon is well-established scientifically, as you can see from the graph above.

grrlscientist | March 11, 2008
tags: Simon's cat: let me in!, animated cartoon, humor, streaming video A hungry cat resorts to increasingly desperate measures to get indoors. If this doesn't make you laugh, well, you need serious help. [1:52]. this video is the second in a series, this was the first.

grrlscientist | January 24, 2008
tags: politics, political opinion, cartoon, Tom Toles, washington post Are you like me, without any clear preferences in the 2008 presidential race? If so, this 2008 presidential candidate guide by Tom Toles might be of use to you; Image: Tom Toles, Washington Post.

What The Anti-Choice Crowd is REALLY About

The Holy Order of Blogging