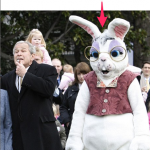 gregladen | April 12, 2017
Why Hitler is Different Hitler is not entirely different from Pol Pot, Stalin, and the other mass killers. He is not entirely different from other fascists. But there is a short list of people, with Hitler on that list, who have this characteristic: They were so bad that we can not and should not compare their badness to each other outside of certain limited academic contexts, and they were so bad that any comparison made between them and their works to anyone not on that list, or to their works, threatens to devalue their badness. We can not devalue the evil of Hitler or his kind.… 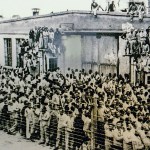 Trump Against the World

milhayser | February 6, 2017
Donald Trump continues his blitz to fulfill all his campaign promises at once, leaving snowflakes aghast and deplorables cheering for the proto-fascism on parade at The White House. On International Holocaust Remembrance Day, Trump issued a statement "in the name of the perished" without any reference to Jews or anti-semitism, and while his Chief of Staff spun this omission a sign of inclusivity, Mark Hoofnagle writes on Denialism Blog that "this is part of a long history of Holocaust denial, in which the experience, memory, and truth of Jewish survivors and victims is diminished and denied… 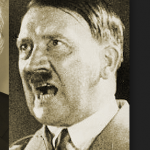 gregladen | January 24, 2017
It is a good idea to occassionally experience history. This helps us understand ourselves, and our possible futures, better. Much of this is done through reading excellent texts. For example, I'm currently reading Team of Rivals: The Political Genius of Abraham Lincoln by Doris Kearns Goodwin. Goodwin's objective is to contextualize Lincoln by looking at him in the broader context of the individuals that ran against him for the Republican nomination, and whom he later added to his cabinet. Goodwin succeeds, at several points, in placing the reader in a time or place of great import.…

oracknows | November 25, 2016
This post is a bit later than usual, but there’s a good reason for it. Last night, I was in full food coma, having consumed the traditional Thanksgiving feast, along with a fair amount of wine. Besides, even a sometimes arrogant bloviator like myself, who uses a pseudonym based on a fictional, near-all-knowing supercomputer from a 35-year-old British cult science fiction series needs a break now and then. So today I’ll be, for the most part, slumming a bit today as I recover. What better place to look for material when you’re not interested in exerting yourself too hard than the antivaccine… 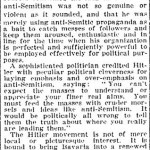 gregladen | November 11, 2016
Look In case the point is not clear, read: Trump’s anti-Semitism, racism, sexism, was not so genuine or violent as it sounded, and he was merely using this language as bait to catch masses of followers, and keep them aroused, enthusiastic, and in line for the time when his organization is ready to make a political move. A sophisticated commenter credited Trump with peculiar political cleverness for laying emphasis and over-emphasis on racist and sexist rhetoric, saying “You can’t expect the masses to understand or appreciate your finer real aims. You must feed the masses with cruder morsels…

illconsidered | August 31, 2012
As Eli Rabbet is noting, Anthony Watts is really unraveling, even further than we noted here a couple of days ago.  So, I just have to post the video below, picked up from Denial Depot.  I swear, I am NOT calling Watts Hitler, not even a Nazi, it is just pretty funny!

gregladen | September 16, 2010
Summary of Hitler's Pope: The Secret History of Pius XII from Library Journal: Relying on exclusive access to Vatican and Jesuit archives, an award-winning Roman Catholic journalist argues that through a 1933 Concordat with Hitler, Pope Pius XII facilitated the dictator's riseAand, ultimately, the Holocaust.

gregladen | September 16, 2010
Hitler's Willing Executioners: Ordinary Germans and the Holocaust is a book well worth reading. I've read it and I think highly of the book. I don' t have time to write a review right now, but here's the PW writeup: Goldhagen's gripping and shocking landmark study transforms our understanding of the Holocaust. Refuting the widespread notion that those who carried out the genocide of Jews were primarily SS men or Nazi party members, he demonstrates that the perpetrators?those who staffed and oversaw the concentration camps, slave labor camps, genocidal army units, police battalions, ghettos,…

First, they came for the Hitler meme. But we were silent...

gregladen | May 26, 2010
Or, on the other hand, this may be a good thing: You know about the [ooh.. something spooky just happened. tell you later] Adolph Hitler video memes, where conversation about pretty much anything (the new iPod, the latest ballgame, whatever) is superimposed over german dialog from Downfall (the 2004 film) giving Hitler and his last remaining bunker-bound Nazi-symps funny dialog. Here, for reference, is the original in German: Well, apparently, the era Hitlering our discourse has gone the way of the Dodo and the Third Reich: On Tuesday, the clips on YouTube, many of which had been watched by…

Utter defeat and devastation at the hands of science

oracknows | March 27, 2010
As far as silly Internet memes go, given my interest in World War II history, I have a weakness for Downfall parodies, which have grown up on YouTube like kudzu over the last couple of years. I also thought it was only a matter of time before someone did something like this and wondered why it hadn't been done before: (Note: In case you don't know or remember who Poul Thorsen is, read this.) I love it: "Perhaps that 14 Studies website was too high brow." Heh. "Now I'll have to pay for another stupid telephone survey." Heh heh. "But what's the use? Orac will only make fun of me." Heh heh heh…

Even Hitler Made a Hitler Parody

grrlscientist | February 15, 2010
tags: Downfall, Even Hitler Made a Hitler Parody, internet meme, technology, Hitler, satire, parody, humor, comedy, fucking hilarious, streaming video If you've been following the Hitler Parodies video meme on YouTube (197 unique videos so far!), then you'll appreciate this amusing parody where Hitler himself tries to jump on the bandwagon. (I am standing in a restaurant in Germany, viewing this video and the waitress just looked over my shoulder .. GAH! I hope this isn't illegal here!)

Hitler Responds to the iPad

grrlscientist | January 30, 2010
tags: Downfall, Hitler Responds to the iPad, technology, Apple, Hitler, satire, parody, humor, comedy, fucking hilarious, streaming video Hitler has been dreaming about the day that Apple's tablet will be announced. That day has come and he is not pleased.

oracknows | January 28, 2010
You knew it was coming. You knew from many previous incidents that it was inevitable: Who knew Hitler was such a Mac geek? Personally, although I think the iPad looks like a really cool device, I'm really not sure where it would fit into my life. I already have an iPhone, which I love, and I already have a MacBook Pro, which I also love. Given that, I just don't see the need for the iPad, at least not for me. However, I also know that I'm not the sort of person for whom the iPad was designed.

grrlscientist | January 20, 2010
tags: The Downfall, Hitler, funny, weird, parody, scientific research paper, peer-review process, scientific publishing, streaming video OMG, this is the most hilarious scientific research video parody I've seen. It is a fly-on-the-wall view of what happens when a research paper is sent out for peer-review and the mysterious reviewer #3 demands more experiments before the paper is accepted for publication. Unfortunately, it is closer to the truth than the public (and even some scientists) realizes ... "Or I could write it up for Scientific American." Hahahaha!

grrlscientist | January 16, 2010
tags: religion, IDiots, satire, parody, comedy, humor, fucking hilarious, Hitler, DOWNFALL, streaming video The so-called Discovery Institute is a pretentious Ã¼ber-Christian disguise for creationism and an ultra-Conservative social agenda called The Wedge Strategy. So-called Intelligent Design theory is plagiarized from William Paley's long-refuted Blind Watchmaker argument, and is merely creationism in a not-so-cunning disguise. Having neither facts nor logic at their disposal, the polemicists of the so-called Discovery Institute have been forced to resort to lies and subterfuge. One of…

Hitler gets mad at Obama

gregladen | September 10, 2009
This is really, really funny: Well, actually, it's not even a little funny... ... Well, actually, the punchline is the funniest thing I've see yet this year. I can hardly type I'm laughing so hard. Hat Tip Science Lover

illconsidered | March 3, 2009
Roger puts up another post (guest post, gotta love plausible deniability) about James Hansen: blah blah blah....dictator who ordered millions of people to be gassed and then burned in crematoria...blah blah blah No, he isn`t (yet) calling Hansen a Hitler, but we all know how Godwin`s Law works. Or almost all of us... [UPDATE: Things Break has a stronger stomach than I do, and he takes a more thorough look at Roger's latest. As usual with Pielke's positions, the closer you look, the less it holds up.]
Advertisment