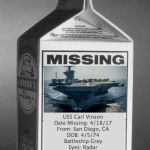 The Mystery of the Carl Vinson

gregladen | April 20, 2017
On September 11th, 1640, a Dutch armada preparing to attack the New World Spanish settlements was lost to a storm, thus changing the course of Dutch, Spanish, and New World history. On January 2nd, 1678, an entire fleet of French naval ships was lost off the Venezuelan coat, changing forever the history of France. And Venezuela. * On or about April 19th, 2017, the United States lost the battle group running with the USS Carl Vinson, somewhere in the Pacific. This altered forever the credibility of the American Military around the world.
Advertisment