Weekend Diversion: Lift me up, Quantum-style!

"I see miracles all around me

Stop and look, it's all astounding

Fucking magnets, how do they work?

And I don't wanna talk to no scientist,

Y'all motherfuckers lyin', and gettin' me pissed." -Insane Clown Posse

While music certainly has the power to be uplifting, the Insane Clown Posse simply won't make the cut for this site. You'd do better listening to LZ Love's song,

Lift Me Up,
which just might do it for you. Even so, it's nothing compared to the power of physics! In particular, the following fantastic video has been making the rounds. Have a look! I first ran into it at Greg's place, and was sure it wouldn't be long before a scientist filled in the details for everyone. Little did I know that when it came, it would contain this howler:

This declaration of ignorance is followed by a -- let's be generous -- partially correct explanation of how this "quantum levitation" works. But let's see if we can't get it right! Let's start with the basic type of magnetism you all know: ferromagnetism. 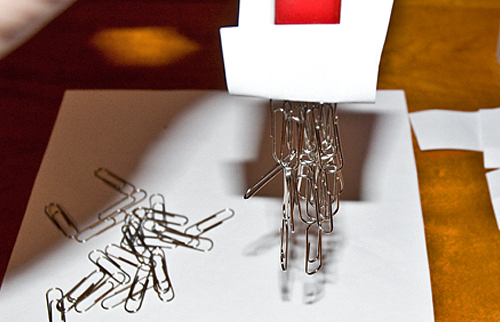 Ferromagnetism is how permanent magnets work, from iron blocks capable of picking up paper clips to the magnets sticking to your refrigerator. The basic principle is that you apply an external magnetic field, and not only does your ferromagnetic material wind up internally magnetized in the same direction as the external field, it remains magnetized even after that field is turned off!

Although this is the type of magnet we're most familiar with, nearly all materials are not ferromagnetic. Why not? 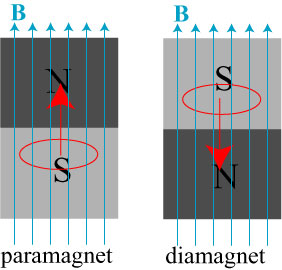 Image credit: Skulls in the Stars. It's a science blog, really! 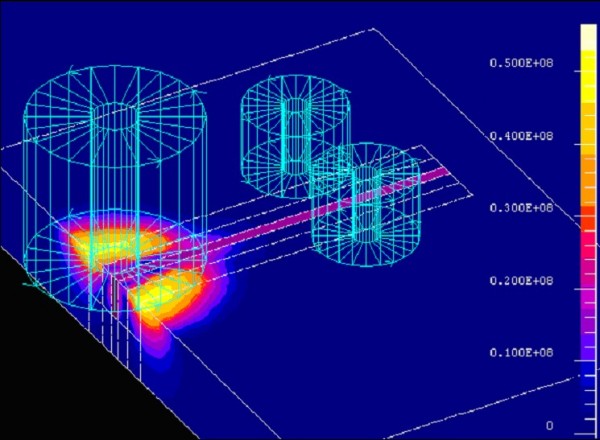 Image credit: Looks like it's from CEDRAT, as far as I can tell.

Now, at normal temperatures, these currents are extremely temporary, as they encounter resistance and decay away.

But what if you eliminated the resistance? What if you drove it down all the way to zero?

Believe it or not, you can drive the resistance down to zero in pretty much any material; all you have to do is bring it down to low enough temperatures, until it becomes a superconductor! 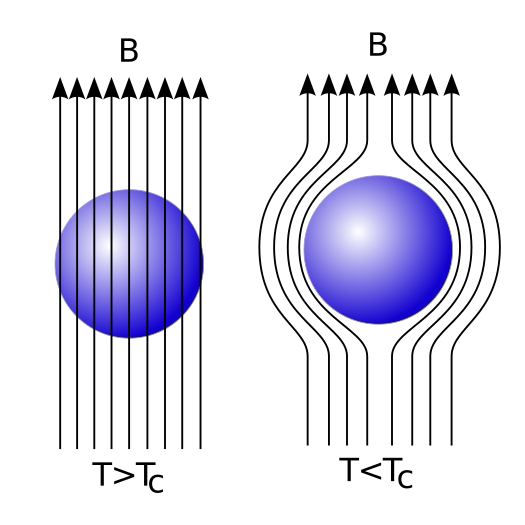 But just what is it that happens when you drop the temperature of a material below its critical temperature, to make it superconducting? It expels all the magnetic fields from inside! This is known as the Meissner Effect, and it turns a superconducting material into a perfect diamagnet.

"Hang on," you may say, "how does that explain this quantum levitation?"

Well, it doesn't, of course. Because what I just told you is for a Type I superconductor, like aluminum, lead, or mercury.

But there's another type of superconductor, one with impurities in it, like the one at the video atop, and also in the amazing video, below.

If your material is an alloy, made of a mixture of materials, it can not only be made to superconduct at higher -- like liquid nitrogen (77 K) -- temperatures, it can also have impurities that run all the way through it! And if this is the case, the magnetic field is expelled from everywhere except the impurities, where the magnetic field can penetrate.

In other words, in a Type II superconductor there are impurities where the magnetic field lines can penetrate. And if the magnetic field can get through, guess what else it can do? Make those eddy currents! And with the resistance driven so far down by these ultra-low temperatures, these currents don't simply decay away; they're sustained. 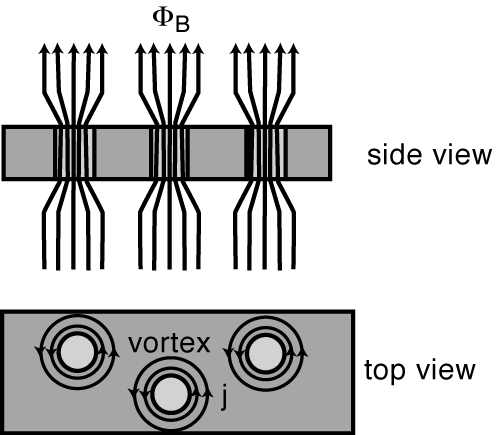 So in the superconducting regions, the fields are expelled, and you get a perfect diamagnet. In the impure regions, the magnetic field lines are concentrated, pass through and cause sustained eddy currents, and this is what pins the superconductor in place! (When you hear the term flux pinning, these confined field lines in the impure regions are what they're talking about!)

Two years ago, I happened to cross paths with Matthew Sullivan of Ithaca College, who has applied this to create some amazing resources, including -- for eye candy -- the video below!

So not only do we understand magnetism, now you do, too, even when applied to levitating quantum superconductors! Now go forth and spread the knowledge, because it's too good to not share it!
Tags
Physics
Video

Sorry, but I have to say your "howler" is not a howler. Laugh all you will but the writer (Tammy Plotner) is right. magnetism is not greatly understood. Your explanation, like all the others you cite, full of examples and mathematical fog, only explains our observations, our experiments of "how it works", not how it comes to be that magnets and magnetic fields exist or what their origins might be. All of the explanations turn out to be circular, as "magnets generate magnetic fields" or "moving something through a magnetic field generates energy" or the like. We only "understand" (partly) a magnet's effects. Unfortunately, this is a common problem. Too many of our explanations of phenomena are simply descriptions of their workings or behaviors, not their origins.We need to do better.

magnetism is not greatly understood.

Your explanation, like all the others you cite, full of examples and mathematical fog

We need to do better.

You need to do better.

Too mathy for you? Tough- it's how the Universe works.

try Wiki, it's a great source of knowledge.

"...Magnetism, at its root, arises from two sources:

This isn't math. This is measurable, experimental physics. The thing is that at one point your own knowledge and understanding will limit you to be able to get the answers you seek. What happens at quantum levels and scales can rarely be described by analogies from macroscopic world. If you take the time to learn about particle charges and electro-magnetism, then you will surely understand where it comes from.

"why" question can be asked backwards till infinity. Why are there forces at all? Well... if one knew that, one would probably know the meaning of Everything. You seem to be angry with physicists for not knowing the Meaning of Life, Universe and Everything else. That's just funny to me :)

You seem to have confused something about type-II and impurities. The entering flux drives a small core away from the superconducting state. You can see this also from the fact that these flux bundles arrange in honeycomb patterns for example (vortex lattices). There are no impurities in such patterns present.

Could be possible that (at least in theory) to produce materials which are superconductors at above 0 degree Celsius?

NJ, is that a free book?

Paul, the high-temperature superconductivity people have been stuck at about 140-160 K for the last 15 years. They would love to get that up to room temperature (for obvious reasons), but even the 140 K ones have the problem of being extremely brittle.

It isn't my field, but getting incrementally closer to room temperature is still all the rage.

getting to room temp or close is one goal. the other one, brittleness Ethan mentioned. (makes fashioning wires difficult). the other problem is getting a high enough critical current density. high currents tend to destroy the superconducting state. high current densities are nice to levitate trains and transmit power and make me a jetpack or something cool.

also, here is Feyman on magnets:

Will this be the scientific break through that leads us to transforming our transportation bases from rollers to hover crafts?