One last thing for sea monster week... but don't get your hopes up too much. We looked earlier at the Moore's Beach (or Santa Cruz) sea monster, a carcass that was identified as that of a Baird's beaked whale Berardius bairdii. I mentioned the fact that the skull was retained by the California Academy of Sciences. Well, here it is... 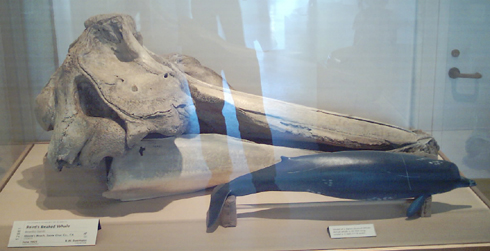 As in all beaked whales (or ziphiids), the skull bones posterior to the external nares are elevated, forming a crest that Moore (1968) termed the synvertex.

This is a primitive condition and - in part - explains why Berardius is thought to be among the most basal members of Ziphiidae (Lambert 2005, Bianucci et al. 2007). Berardius also differs from most other ziphiids in having its mesorostral gutter partially filled by an ossified mesethmoid, and by possessing a rounded lump (formed from the interparietal or frontals) on the vertex (in between the nasals and supraoccipital). All of these features are clearly observed in the skull shown here. 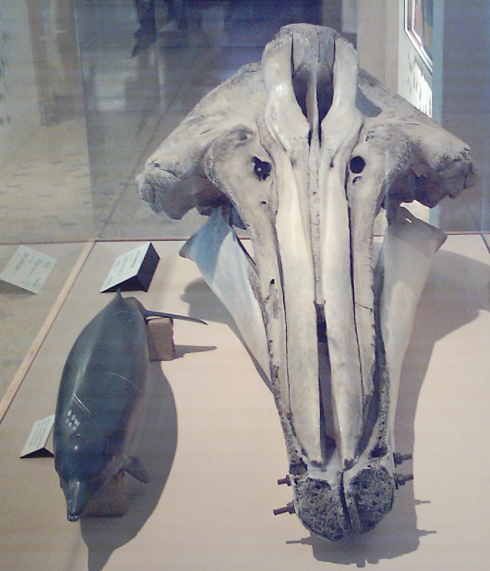 Of course, the apically located, laterally compressed tooth pairs of Berardius are also diagnostic, but we can see that the tips of the Moore's Beach animal's dentaries are damaged, and as a consequence the teeth are entirely absent (so far as I can tell). I wonder why: did someone remove them from the skull before the CAS prepared it?

The images were kindly provided by Thomas J. Gehling, who took them in 2004, and are used with permission. Thanks Thomas.

Systematics and phylogeny of the fossil beaked whales Ziphirostrum du Bus, 1868 and Choneziphius Duvernoy, 1851 (Mammalia, Cetacea, Odontoceti), from the Neogene of Antwerp (north of Belgium). Geodiversitas 27, 443-497.

It's wonderful that the skull of a sea monster is on display in a museum. I wonder if their display says anything about its history as a sea monster. Very interesting that the sea monster turned out to be a whale (like some other sea monsters) . This is my favorite of the sea monster pictures. I really enjoyed these posts.
As for the undiscovered large marine tetrapods hinted at in previous posts, I have a sneaking suspicion they will go extinct shortly before being discovered. (Any undiscovered marine tetrapod is likely (a) not numerous, (b) at risk from global warming, (c) at risk from ocean acidification. )
Alternatively, I wonder what the odds are that one or more cetacean species were hunted to extinction before being identified as distinct species (being mistaken for a closely related species) .
Finally, I must add that some of my favorite sea monster pics can be found here. But they don't have much in common with tetrapods.

Interparietal? One more occurrence of fused postparietals in extant mammals?

Interparietals are pretty common (= widespread) in mammals, though not present in marsupials and xenarthrans (whether monotremes possess one or not is controversial). Isn't the interparietal homologous with the postparietal? This is what de Beer said.

Are the bolts to hold in false teeth, perhaps?

Llewelly writes:
"Alternatively, I wonder what the odds are that one or more cetacean species were hunted to extinction before being identified as distinct species (being mistaken for a closely related species)."

I fear that may be quite likely. We know that whaling-- even old-fashioned whaling with hand-thrown harpoons-- CAN drive a cetacean species to extinction, as it did eliminate the Gray Whale from the Atlantic by around 1700, and it was just luck that there was another population of the species in the Pacific (if, indeed, Atlantic and Pacific gray whales were conspecific!). And we know that whale species can be confused: Omura's whale was not distinguished from Bryde's whale until DNA analysis of specimens provided by Japanese "scientific" whaling a few years ago. (A bit of irony their: "Japanese scientifc whaling" actually DID contribute something to scientific knowledge!) When Omura's whale was announced it was noted that its numbers were unknown, and that the very program that had led to its discovery might be endangering it.

Oh, you wily evolutionists, trying to hide the evidence for living sea-dinosaurs. Do you think we can't see the bolts on that "whale" skull?

Isn't the interparietal homologous with the postparietal?

With the pair of postparietals, yes, most likely.

I once found a paper that reported separate postparietals and tabulars (!) in a human skull. I might be able to find it again from late next month onward.

I once found a paper that reported separate postparietals and tabulars (!) in a human skull.

Huh. Humans are so primitive :)

I never mentioned in the golden mole article that golden moles have tabulars.

Thought I'd mention a small fact that helps illuminate how weird Ziphiids are - some species of ziphiids totally resorb their premaxillae during ontogeny. I can't remember why, though...

I never mentioned in the golden mole article that golden moles have tabulars.

And they aren't osteoderms or ossified ligaments or something?

some species of ziphiids totally resorb their premaxillae during ontogeny.

November 8, 2011
You are currently at the old, defunct version of Tet Zoo. To see new stuff (from July 2011 to present), click here. See you there.

Goodbye Tet Zoo ver 2. This really is the end.

July 5, 2011
On January 23rd 2007, Tet Zoo ver 2 - the ScienceBlogs version of Tetrapod Zoology - graced the intertoobz for the first time. There was rapturous applause, swooning, the delight of millions. Looking back at it now, that very first ver 2 post is rather odd. It's on the blood-feeding behaviour of…

June 30, 2011
So sorry for the very short notice. The following airs here in the UK tonight (Thursday 30th June 2011), Channel 4. I look forward to it. For the Tet Zoo articles on ING and related issues, see... Inside Nature's Giants: a major television event worthy of praise and accolade. Part I! Inside…

June 29, 2011
If you didn't know, I've been away. The last four articles that have appeared here were all scheduled to publish in my absence. I've been in Romania and Hungary where I had a great time - saw lots of neat animals (fossil and living) and hung out with some neat people. I'll talk about some of this…

June 27, 2011
Yet more from that book project (see the owl article for the back-story, and the hornbill article for another of the book's sections). Hornbills, hoopoes and woodhoopoes are all similar in appearance and have been classified together in a group termed Bucerotes. Vague similarities with other long…