Race and gender and religion

America is a very religious country, and has been for a long time.  Regardless of broad cultural revolutions and trends in the culture wars, about the same number of people say religion is "very important" in their lives today as 35 years ago.

Other measure of religiosity shift, as Gallup points out.  "Self-reported church or synagogue membership has drifted slowly downward over the past 70 years," they found in 2007, a year when perception of religion's influence in society plummeted.  Confidence in organized religion has dropped by a third since the '70s.

But whatever people might think of religion, how much they think society values religion, how influential they think a deity might be in the world around them, or how they take part in religious practices, Americans consistently believe in God and think religion is important.

That fact has inspired a lot of fighting over how advocates of evolution education in particular, and advocates of a skeptical mindset more broadly, should deal with religious Americans.

On one hand, there are folks who say that religion is ubiquitous in the American public, and antagonizing religious folks by attacking religion just makes it harder to convey a message about science.  On the other hand, you have people who hold that religion is antithetical to science and so should be attacked.  The first group generally disputes the claim of an absolute opposition between science and religion, but that's a topic for other days.

This question is related to, but tends not to be linked with, broader discussions about diversity in science and in skepticism.  Skeptical conferences have been getting better about acknowledging that half of America is female, and reflecting that diversity in the lists of speakers, and thinking about how to get a more sexually representative audience.  As a general matter, science skews male, though that varies by discipline, and the gender gap is a topic of regular discussion.  Skeptical events and the community of scientists are also notably white.  The skeptical community's response to the racial differential hasn't been as forceful as it has been with sex and gender, but there's genuine concern.

It occurs to me that the discussions about race and gender may not be so distinct from the discussion of religion.  First, because these are all matters of personal identity, and it isn't unreasonable to evaluate communities based on their willingness to exclude certain people based on deep matters of identity.  Second, because religiosity is linked with gender and with race in complex ways.

It's a common finding in public opinion surveys that women are far more likely to be religious than men, and they express that religious identity differently.  Gallup summarizes:

A mountain of Gallup survey data attests to the idea that women are more religious than men, hold their beliefs more firmly, practice their faith more consistently, and work more vigorously for the congregation. In fact, gender-based differences in responses to religious questions are far more pronounced than those between any other demographic categories, such as age, education level, or geographic region. The tendency toward higher religiosity among women has manifested over seven decades of scientific polling, and church membership figures indicate that it probably existed for many decades prior to the advent of survey research in the mid-1930s.

Why the difference?  Some offer reasons rooted in evolutionary psychology, others point to differences in gender socialization, to differences in risk aversion, and to other social factors.  Regardless of the causes, women are more likely to believe in religious and spiritual phenomena, to attend religious services, to belong to religious organizations, to read religious texts, to see religion as offering answers to problems, to find religion important in their lives, to be committed to their religious community, and to be engaged with their religious community.  While male belief that religion is important has declined over the last decade, women have found religion more important.

There are, of course, bigger reasons why women often feel uncomfortable in scientific and skeptical communities, but I wonder if a perception of religious intolerance plays some role as well. 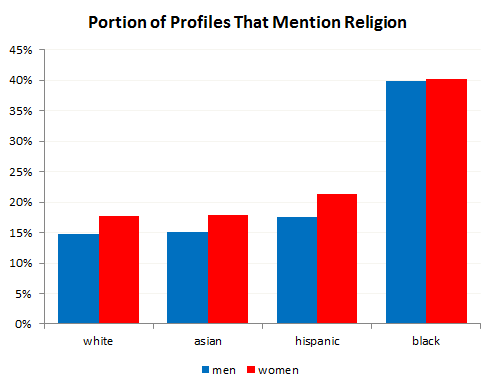 Similarly, data from OK Cupid gives an interesting look at the role religion plays in personal identity in African American communities.  OK Cupid is a free online dating site, and does the world a great service by publicly crunching numbers from its enormous database of demographic data their members; it's not a representative sample, OK Cupid members tend to be urban, younger, and of course single.  A couple years ago, they looked at the different language people from different races used to describe themselves, and found a surprising difference in the role of religion.

In a random sample of 526,000 profiles, they found that African Americans were at least twice as likely to mention religious identities (God, Jesus, church, etc.) as other racial groups.  This effect vastly outstrips gender differences.  One in six profiles from other races mentioned religion, while 2 in 5 profiles by African Americans did so.  "God-fearing" was among the most commonly used phrases that shows up distinctly in African American profiles.

This is important for two reasons.  It reflects genuine differences in religiosity.  Gallup finds that 53% of African Americans consider themselves "very religious," compared to 39% of whites and 29% of Asian Americans; whites are more that twice as likely as African Americans to identify as non-religious.  But the difference between a poll response and a dating profile is that the latter shows how people see themselves, and how they want others to see them.  The OK Cupid data tell us that African Americans aren't just more religious personally, but that religion plays a greater role as a social cue in that community.  Dating profiles are all about signaling what sort of person you are and what sort of person you want to be seen as; OK Cupid notes that Asian Americans tend to use "I'm simple as their go-to self-description," compared with "black men's I am cool and Latinos' I'm a funny guy."  The heavy emphasis on religion suggests that the African American community sees religion as a measure of personal virtue to a greater degree than the rest of American society.  And the rest of American society sees religion as a very important signal of personal virtue!  This year is the first when more than half of American voters claim they'd vote for an atheist candidate for president.

Given this, it wouldn't surprise me to find that an unfortunate (and incorrect) perception of science or skepticism as anti-religion would play a role in the gender and racial disparities that both scientists and skeptics recognize and want to reverse in their communities.  Being more open to religious people might help skeptics and science advocates more effectively reach out to underrepresented communities.