Cats, cheezburgers and zombies: The new (and awesome) public health

Funny cats and disaster preparedness. It's a marriage made in Internet heaven.

"Cats are all over the Internet," says Michele Late, coordinator of the American Public Health Association's (APHA) Cat Preparedness Photo Contest. "And if cats are what people want, then marrying them with emergency preparedness seems like a smart fit."

Launched just after Labor Day weekend, APHA's cat photo contest takes its inspiration from the enormous popularity of an Internet meme known as LOLcats, in which — yep, you guessed it — people take funny photos of cats and photoshop them with funny text called LOLspeak. (The phenomenon began with a photo of a gray cat sitting on its hind legs with its mouth open and text that reads: "I can haz cheezburger?" If you're a cat lover, this is hilarious. Believe me.) Need more proof? The I Can Haz Cheezburger website has 24 million fans who share half a million photos every month.

APHA is hoping to channel some of that popularity to raise awareness around emergency preparedness. It's a creative, humorous, pop culture-inspired effort not often used in public health, but sure to reach people who might otherwise never have given a second thought to getting ready for an emergency. 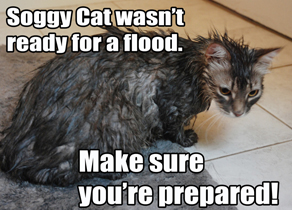 "We know that too many Americans are unprepared for an emergency," Late told me. "They've heard the messages, but they're not taking action."

A 2012 poll of U.S. adults conducted by Adelphi University's Center for Health Innovation found that significant numbers of Americans aren't ready for an emergency. The poll found that 48 percent don't have emergency supplies, 44 percent don't have first aid kits, 53 percent don't have an emergency supply of food and water, and 55 percent believe local officials will come to their rescue if a disaster happens. And according to new survey data published this week in CDC's Morbidity and Mortality Weekly Report, positive preparedness indicators, such as having a three-day supply of water and nonperishable foods, increased along with the age of survey respondents.

Such gaps are the perfect chance to try something new — "to think outside the box to reach people in a humorous way and get them to stop and think about preparedness," Late said.

"I think there's growing recognition that this kind of innovation can work with public health messaging," Late told me, pointing to last year's wildly popular zombie apocalypse preparedness campaign created by the Centers for Disease Control and Prevention. "There's a real opportunity here."

'Soggy cat wasn't ready for a flood. Make sure you're prepared!'

That's the text that accompanies a photo a soggy wet cat who looks very unhappy. Beneath the sample photo, which is part of APHA's gallery of preparedness cats, is a link to a fact sheet on getting prepared for a flood. Another photo features the face of green-eyed gray cat. He looks severely annoyed with you. "You aren't prepared for emergencies," he asks. "We are not amused." Below him, a link to how to get prepared. That's the strategy behind the APHA contest, Late says: Get people's attention and then steer them toward evidence-based recommendations on how to prepare for an emergency.

The cat photo contest, held to coincide with National Preparedness Month, is part of APHA's Get Ready campaign, which works to help Americans get ready for all disasters and hazards, from hurricanes and tornadoes to pandemic flu and mosquito-borne illnesses. The cat photo contest, the winners from which will be printed in a 2013 Get Ready calendar, isn't the campaign's first foray into pop culture. This summer, APHA's Get Ready staff produced their own music video version of the pop song "Call Me Maybe," renaming it "Let's Get Ready!" with new lyrics like: "Flashlight I'll be holdin'; Dark clouds, wind is blowin'; Green sky, hail is fallin'; Let's shelter in place, baby?"

"We've all heard the preparedness message, but we're trying to wrap it in a bow and put it in a new package as a way to reach people not being reached by traditional messages," Late says. 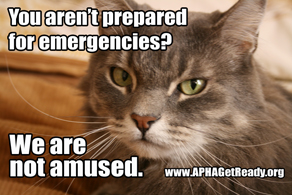 This cat wants you to prepare for an emergency. Image courtesy the APHA Get Ready campaign

Maggie Silver, a health communications specialist at CDC, said she was "so excited" when she saw APHA's cat photo contest — "it' such a great example of not doing the generic fact sheet and guidance that's usually put out."

"(Public health doesn't) need to be straight-laced all the time," Silver told me. "We should be engaging in the all the different angles we can take. I think campaigns like this get public health out into people's line of vision so they're more cognizant of it day to day."

Silver was involved in creating CDC's zombie apocalypse campaign — an effort so popular that it increased web traffic to the agency's preparedness site by more than 1,000 percent, she said. In fact, Silver said the zombie campaign garnered so much attention that the visitor overload literally crashed CDC's blog site. The CDC campaign includes a "Preparedness 101: Zombie Pandemic" novella that teaches readers how to get prepared in an entertaining way as well as slogans such as "If you're ready for a zombie apocalypse, then you're ready for any emergency."

The zombie idea began, quite appropriately, with social media. In the wake of the 2011 earthquake that devastated Japan, CDC asked its Twitter followers what kinds of disasters they were preparing for and some people actually answered zombies. So when hurricane season approached, "we decided we needed to spice up our preparedness approach...we figured why not give the people what they want," Silver said.

"Obviously, it was a little outside the norm for CDC," she said. "But we've got a great director (Ali Khan, director of CDC's Office of Public Health Preparedness and Response) and he saw the benefit to being a little more engaging with our messages and using zombies to get into people's day-to-day conversations."

Silver said she and her colleagues were completely surprised at the amount of attention the zombies got — "we had no idea the entire nation would be interested in it." CDC's zombie blog post still receives thousands of web visits a month, she said, but CDC isn't planning any new zombie-themed efforts.

"We're looking for the next new and engaging way to reach audiences," Silver said.

While less than two weeks old, APHA's cat photo contest may be that next big thing. The contest has been tweeted by CDC, featured on the I Can Haz Cheezburger website and shared nearly 1,500 times via social media followers.

And one of the most common questions APHA has received so far about the contest: What about dogs? Late says maybe next year.

To learn more about the Get Ready Cat Preparedness Photo Contest, which is accepting entries through Sept. 30, visit www.getreadyforflu.org/catphotocontest.htm. For more information and resources on preparing for an emergency, visit the Get Ready site.

Kim Krisberg is a freelance public health writer living in Austin, Texas, and has been writing about public health for the last decade.

by Kim Krisberg To the long list of hard-to-pronounce bacteria and viruses that threaten people's health can now be added one more threat: sequestration. Except sequestration isn't a disease — well, unless you'd call Congress' chronic inability to deal with the national debt in a fair and balanced…

by Kim Krisberg It only takes a few minutes of talking with Scott Becker to realize just how passionate he is about public health. In fact, his enthusiasm is contagious. Maybe that's why he isn't mincing his words. "What keeps me up at night is how we are going to maintain the core and critical…

Be prepared, and be careful not to do Your good deeds when there's no one watching you If you're looking for adventure of a new and different kind And you come across a Girl Scout who is similarly inclined Don't be nervous, don't be flustered, don't be scared, Be prepared (Tom Lehrer, Be Prepared…

The American Public Health Association's annual meeting is taking place this week in San Francisco, with the theme of "Prevention and Wellness Across the Life Span." If you're not there (or if you're there but can't possibly attend all the sessions you want to), the APHA Meeting Blog is a great way…

Watch out cat lovers! Your felines can't compete with the preparedness antics of our canines.

It'll be hard to top the zombies. That was a fantastic campaign.

zombie cats and dogs? Somebody must be submitting a zombie cat, although dogs are more likely to submit to the costuming.

Mostly commenting to say I love your blog. I've been pointing folks here (and to stories you point out on this blog) to find out about the fake butter flavor chemical. You all do great work

Err, they need to ixnay the stilted bureaucrat-speak when doing a 'clever' message. Soggy Cat needs a touch of LOLspeak, not too much, and avoid officialese such as "make sure you're prepared", which sounds like something a nagging aunt might advise.

OTOH, a Zombie Apocalypse message is pretty hard to screw up.

October 27, 2017
A few of the recent pieces I recommend reading: Vox's Sean Illing interviews Nikole Hannah-Jones: “Schools are segregated because white people want them that way" Roxane Gay in the New York Times: Dear Men: It's You, Too Brady Dennis and Juliet Eilperin in the Washington Post: ‘Let us do our job’:…

October 4, 2017
We made it to October without letting Congressional Republicans ravage our healthcare system, so that's a relief. However, the fact that it's October also means funding for the Children's Health Insurance Program and federally qualified health centers has expired ... and Congress has been putting…

More reasons to oppose the latest awful iteration of GOPcare

September 24, 2017
Many of us were cheered by Senator John McCain’s announcement of his opposition to the horrible Graham-Cassidy bill that would gut Medicaid and wreck the individual insurance market. But Senate Republicans could still pass this bill, and will keep trying until the clock runs out at midnight…

September 17, 2017
Republican Senators have proposed one more bill to repeal the ACA. The Graham-Cassidy (or Cassidy-Graham) proposal would dramatically shrink the pool of federal money going to healthcare and revise how it’s distributed to states, in a way that is especially damaging to states that accepted the ACA’…

Worth reading: Hurricanes and Trump's war on science