Genocide is a Public Health Problem

Every day we see and hear another grim and gruesome story from Bangui, but perhaps that is because we are working in Paris this winter, and there are French soldiers who been into the old colonial domain. Yesterday The New York Times captured the horror on its Editorial Page, under the title “As Genocide Looms”: “The Central African Republic is on the verge of being torn apart by the rampages of Christian and Muslim militias and civilian mobs… In Bangui, the Muslim population has largely fled. Christian militias have taken advantage of the chaos to engage in horrific ethnic cleansing of Muslims.”

Five years ago, we asked an old friend, Elihu Richter (a nephew of the late Irving Selikoff) to expand on a conversation we had had about public health and genocide by writing a commentary for the Journal of Public Health Policy.  We probably asked for too much. But when we revised the request and asked him to write a book review of Paul Rusesabagina’s No Ordinary Man, about the Rwandan genocide, we received a fabulous essay that went well beyond our earlier conversation.

Richter starts, “The big question, of course, is why did it all happen? Rusesabagina, after telling us “it happened because of ethnic hatred” directed against the Tutsis, descendants of the ruling classes of Rwanda, then asks: “What caused this to happen? Very simple. Words”.

Our friend Ellie Rubin provided us a wonderful image to accompany the Commentary: 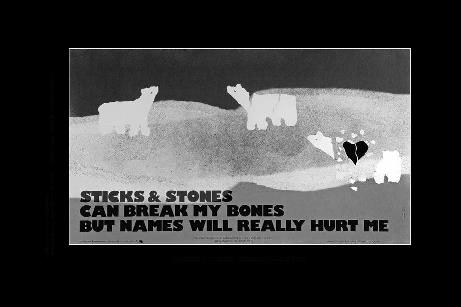 Reproduced with the kind permission of Eleanor Rubin

The story of the Rwandan genocide is grim, but it provides the argument for early public health intervention. The Central African Republic, although it is very late, surely needs such help right now.

Richter concluded his piece, “What can we in public health and epidemiology do to prevent genocide?”

Richter's Commentary is worth re-reading today.

By Anthony Robbins According to the New York Times, President Obama will create an Atrocities Prevention Board. You might well ask, what has this to do with public health? I might have had the same thought except for a Commentary that my co-editor and I published in the Journal of Public Health…

Is Software to Blame, Again?

by Anthony Robbins, MD, MPA President Obama's health reform has been derailed in a collision with health insurance software, but this is hardly a unique experience. In 1995, I was invited to Prague to try to help the Czech Republic reconcile two co-existing public health practice cultures–the…

by Anthony Robbins, MD, MPA A recent editorial in the New York Times, "Rolling the dice on food-borne illnesses," focused on just one of the many health dangers related to the federal government shutdown.  The editorial reminded me of developments in Vermont almost forty years ago, when I was the…

By Anthony Robbins, MD, MPA I am always just a little skeptical about public health education.  Do students learn to apply the principles they learn?  Recently, I was able to answer in the affirmative, at least about a single occurrence. When I walked into the restroom of a Cambridge restaurant,…
Advertisment

October 27, 2017
A few of the recent pieces I recommend reading: Vox's Sean Illing interviews Nikole Hannah-Jones: “Schools are segregated because white people want them that way" Roxane Gay in the New York Times: Dear Men: It's You, Too Brady Dennis and Juliet Eilperin in the Washington Post: ‘Let us do our job’:…

October 4, 2017
We made it to October without letting Congressional Republicans ravage our healthcare system, so that's a relief. However, the fact that it's October also means funding for the Children's Health Insurance Program and federally qualified health centers has expired ... and Congress has been putting…

More reasons to oppose the latest awful iteration of GOPcare

September 24, 2017
Many of us were cheered by Senator John McCain’s announcement of his opposition to the horrible Graham-Cassidy bill that would gut Medicaid and wreck the individual insurance market. But Senate Republicans could still pass this bill, and will keep trying until the clock runs out at midnight…

September 17, 2017
Republican Senators have proposed one more bill to repeal the ACA. The Graham-Cassidy (or Cassidy-Graham) proposal would dramatically shrink the pool of federal money going to healthcare and revise how it’s distributed to states, in a way that is especially damaging to states that accepted the ACA’…

Worth reading: Hurricanes and Trump's war on science