This is an adaptation of my shortlisted entry to the 2013 Future of Money Design Award. The brief was to design a crime that would exist in a cashless economy. The judging took place at the Consult Hyperion  Tomorrow's Transaction conference. I didn't win, but I enjoyed working on the idea and it was nice to make it to the final three, so I thought I'd share it here. Note that this is a work of fiction, although it contains many true elements.

EDIT: Since writing this, a lawsuit has been filed against a Pennsylvania McDonald's restaurant that insisted on paying employees via a fee-laden debit card. You heard it here first...

Hello, my name is Frank Swain and I’m here from Unity, a charity established in 1984 to defend rights of workers in Britain. We work to secure fair pay, tackle exploitation, and provide legal counsel and support services to those in need. I'm writing here to ask for your help in fighting one of the most pernicious threats facing working men and women in Britain today. 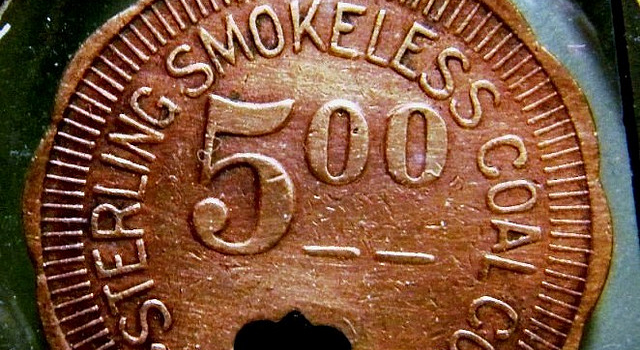 If you were a worker in a 19th century Indiana, this is what you might have been paid, a coupon known as a scrip. In remote areas such as mining towns and plantations, where currency was in short supply, tokens such as these were given to worker in lieu of cash. This was known as the tommy or truck system. The truck system was common in Britain in the 18th and 19th centuries. In his famous book Rural Rides, agriculturist and political reformer William Cobbett wrote of the system in operation in Wolverhampton and Shrewsbury. The tokens could only be reimbursed in co-operating businesses, typically owned by the company itself, and so the company were able to control how a worker spent his money.  The truck system also allowed employers to recoup money spent on wages. However, in a physically and economically captive market, prices in the company store could be set at extortionate rates, and many workers ended up in debt to the very people they worked for.

Fast forward a century or two.

In January 2013 thinktank Demos suggested issuing benefit payments on disposable pre-paid cards. This came on the back of a bill introduced by Conservative MP Alex Shelbrooke in December that proposed a similar system, restricting the purchase of what he called NEDDs – non-essential, desirable and damaging products. Shelbrooke was quoted as saying:  “Prohibiting the purchases of NEDD items such as cigarettes and alcohol, leaves more money for priority purchases on children.” Note that the honourable gentlemen hasn’t yet called for end to alcohol subsidies at the Commons bar.

This bill established the legal framework for restricted point-of-sale (RPOS) credit and debit cards.  Employers worked with banks to develop inflexible payment systems that pivoted on these so-called RPOS cards.  The mantra  that the economic collapse had stemmed from reckless borrowing by lower classes did little to discourage the development of RPOS cards, which were presented by the banking industry as tightening its lending practices.

The new system was spearheaded in organisations whose employees possessed weak bargaining rights – typically migrant workers employed by licensed gangmasters, which of course is still very much legal in the UK. The cards gave the gangmasters greater control over their workers, prevented elopement and compelled them to remain working even in unfavourable conditions. This arrangement suited the Government of the time, because it meant that migrant workers could not save money to secure a foothold in the country. Their movement and purchases were restricted, and if employment was terminated they would be forced to return home. Naturally, the employees felt that the new system was akin to slavery – though a more precise definition would be that Cobbett’s truck system had re-emerged. Because the RPOS cards were primarily issued to marginalised groups – poor, uneducated, foreign born, and with little voice - their plight went largely unreported in the media.

However, market forces could not be so easily be controlled. The restrictions imposed by the RPOS cards immediately fuelled the growth of a grey economy, where these modern-day scrips were bartered for goods under various arrangements.  Disposable welfare cards would be sold for cash and then reported lost, so that the authorities issued a replacement. Some individuals would lose up to ten cards a year. In response, anyone who lost too many cards was audited, and welfare officers also studied usage of suspect cards to detect when and where transactions had taken place, effectively placing the finances of all welfare recipients under surveillance. 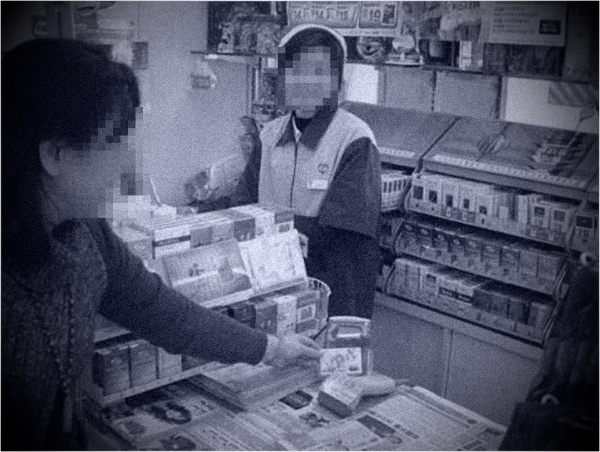 Much harder to identify was fraud committed with the assistance of shopkeepers. In the photo above, a shopkeeper sells a woman cigarettes by running them through as a food purchase. As would be expected, the money subtracted from the card is more than the face value of the cigarettes, so the individual is exploited a second time.

Migrant workers whose families rely on repatriations – which make up the greatest movement of capital in the global economy – are forced to trade  their restricted credits for cash from third party vendors. These money changers take a substantial profit for themselves as part of the exchange rate, further diminishing what little income the labourers earn.

At the Conservative Party Conference in 2012, George Osborne had signalled a new chapter in the worker-employer relationship, announcing a system that encouraged employees to forfeit employment rights such as maternity leave, flexible hours and protection from unfair dismissal in exchange for a one-off payment of company shares. Legal restrictions mean this would remain optional for existing employees, but there was nothing to prevent companies demanding new staff subscribe to these conditions. Those new powers came into force in April 2013.

In the summer of 2013, hundreds of thousands of disenfranchised students found that as they entered the already weakened job market, they were offered repressive contracts which cornered on the new truck system. Payments would be made into escrow accounts accessed through RPOS debit cards. In some cases, up to 50% of the wage was only redeemable in transactions at affiliated business, dictating where and how the workers spent their money. Shortly after, mass protests were held across the country.

The truck system triggered an immediate backlash among a population who were young, activist-minded and technologically adept. They set about targeting weaknesses in the RPOS system, hacking the cards to remove the restrictions. In this image, the RFID microchip of a debit card has been exposed, the first step in deactivating the controls.

The cards appear white because the outer laminates have peeled off – probably why this technique became known as “whitelisting”. Information on how to override the RPOS cards quickly spread through social media. Here, a video demonstrating one card-unlocking technique has received over 700,000 views on YouTube, and there are plenty of others in the sidebar.

The so-called Liberation movement demanded open access to their money, and the freedom to spend it as they would with cash. The authorities hit back in early 2014 with the arrest of Alan Black, under anti-terror laws designed to prevent fund-raising for armed insurgent groups. Black was the teenage hacker who broke the encryption on the RPOS system and published his findings online, allowing the cards to be remotely whitelisted. The case has yet to be heard, and in the meantime has done little to prevent the spread of information detailing how to override the blocks on RPOS cards.

Legally, both the new found truck system and the methods used to unlock it are a legal grey area, with both sides awaiting the outcome of Black’s trial, the ruling of which will form case law.  In the meantime, services have sprung up to offer RPOS unlocking. However, it remains a risky procedure, and vendors frequently face harassment and arrest by local authorities. Tampering with a scrips card is strictly prohibited by employment contract, meaning that employees must risk termination and financial ruin to escape the truck system. For many of Britain’s poorest and most vulnerable workers, that is a risk they cannot face.

I implore those of you reading this to support the work of Unity in defending the rights of the country’s most at-risk workers. Unity is working with politicians to introduce a bill that would outlaw the use of truck system wage arrangements, freeing hundreds of thousands of workers to live according to their own financial choices.  Truck, tommy and RPOS are all names for the same thing: a wage system that is bad for workers and bad for Britain. I ask you today, to help us in returning the this system to where it belongs: the history books.

How different is the UK system from how the US does "food stamps" on debit cards these days?

Hi Brett - As far as I know, welfare money is paid directly into recipient's bank accounts here in the UK.
The thinktank Demos actually came out against electronic food stamps in the end, for some of the reasons I've illustrated here, and convinced Shelbrooke to withdraw the proposed bill.