Today, The Pump Handle had its own bizarre experience with the Trump Administration. It came via an email sent by HHS spokesperson Matt Lloyd to members of the Association for Health Care Journalists. Some of those professionals were reporting on the data released today by the Centers for Medicare & Medicaid Services (CMS) on insurance enrollment on Healthcare.gov. The 90-day open enrollment period ended this week.

CMS's plain-spoken news release indicates that 9.2 million individuals selected plans from the ACA marketplace, including three million new consumers. Many of these Americans would not otherwise be able to purchase health insurance, but the marketplace provides access to the subsidies to help them pay the cost of the plans. What's also notable about the 9.2 million is something else from CMS' new release. The agency notes that the average premium for a low-cost silver plan increased by 25% and the number of insurers offering plans on Healthcare.gov decreased by 28%. So, despite the insurance industry's profiteering, 9.2 million individuals used the ACA exchange to secure health insurance. That's a good thing.

Then came the email from the HHS spokesman. It starts out "Hey folks" (such an annoying unprofessional salutation.)  Read it for yourself: 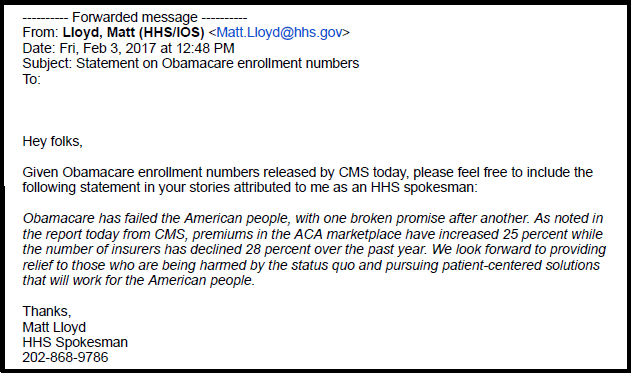 The HHS spokesperson provides an unsolicited statement to the press in response to a news release coming from one HHS's own agencies?

Not on the top of the list of bizarre incidents coming from Trumpies, but too odd for The Pump Handle to ignore.

P.S. Matt Lloyd worked for the VP Pence when he was Governor of Indiana and before that a communications director for Koch Industries.

Pence has also picked up a particularly awful person from Michigan - this guy worked for Governor Snyder and was involved the great "hide the problem with water in Flint" escapade the governor and our Department of Environmental Quality rolled out.

Thank you for sharing this, now we can recognize it when we see his words used elsewhere.

I'm wondering what fraction of educated, intelligent Germans in Germany in the 1930's were able to recognize the public health menace of fascism. Many of them had the option of going somewhere else. I think that we in America have to stay and fight.

October 25, 2017
Celebrity chef John Besh has joined Harvey Weinstein and Bill O’Reilly in news headlines about sexual harassment in the workplace. The New Orleans-based Besh has received numerous James Beard awards and has appeared on the Bravo TV network’s show Top Chef. His offenses were reported this week by …

Pollution: not “an unavoidable consequence” of development

“A gift to the construction industry”: catchy quotes from Court of Appeals argument on OSHA’s silica standard

October 14, 2017
OSHA took the long road to adopt a standard to address respirable crystalline silica. Although the final rule was issued in March 2016, it is being challenged by both industry and labor groups. The first says OSHA went too far, the other says OSHA didn’t go far enough. The long road, however may be…

October 11, 2017
The U.S. Supreme Court is not interested in hearing former Massey Energy CEO Don Blankenship's claim that he didn't get a fair trial. On October 10, the court denied Blankenship's petition to review his criminal conviction. (here (see page 3)) In December 2015 a jury found Blankenship guilty of…

October 4, 2017
President Trump’s nominee to head the Labor Department’s Mine Safety and Health Administration (MSHA) appeared today before a Senate committee for a confirmation hearing. David Zatezalo answered questions about the epidemic of black lung cases, an increase in mine worker fatalities, the need for…