His work led to the worldwide elimination of chlorofluorocarbon gases (CFCs) from aerosol cans and refrigerators. The first Mexican-born citizen to receive the Nobel Prize in Chemistry. 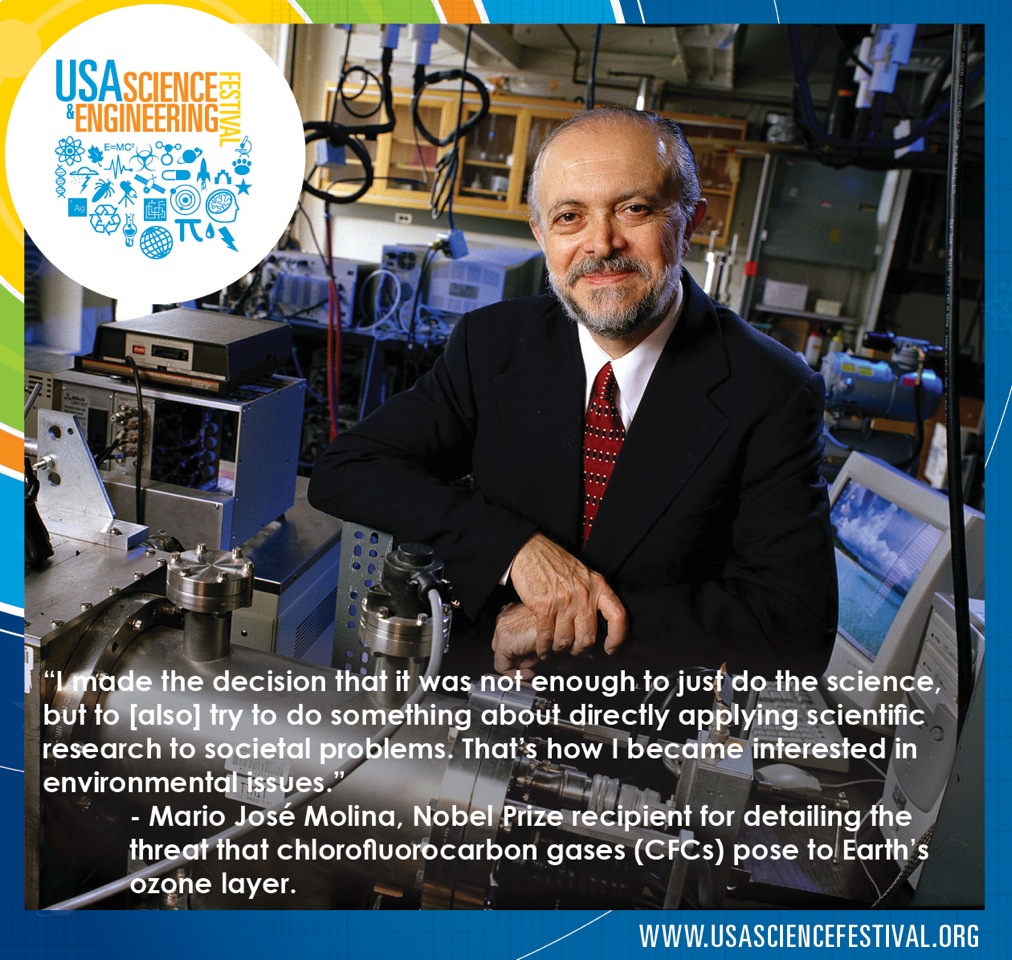 Environmental problems pose a huge threat to Mother Earth, and it's up to scientists around the world to take a leading role in solving them, says chemist Mario José Molina. Mario is known globally among colleagues for putting these words into action. He was born in Mexico City where his father was a prominent lawyer and diplomat who went on to serve as chief Ambassador to Ethiopia, Australia and the Philippines. Science was a part of Mario's life from an early age. When he was small he converted a bathroom into his own little laboratory, where he would look through toy microscopes and play with chemistry sets. He always looked up to his aunt Esther Molina, a chemist, to help him with his experiments. He went on to complete his pre-college schooling in Mexico City and Switzerland before studying chemical engineering and chemistry at the university level in Mexico and abroad.

Why He's Important: Mario --with colleagues Paul Crutzen of the University of California (San Diego) and F. Sherwood Rowland of the University of California (Irvine) --  coauthored a paper that detailed their research on the threat of chlorofluorocarbon gases (CFCs) to the ozone layer in the stratosphere. At the time, CFCs where widely used as chemical propellants and refridgerants. The research of Mario and his colleagues played a substantial role in the worldwide elimination of CFCs from aerosol cans, refrigerators and cleaning solvents, and it is for this work that they were collectively awarded the Nobel Prize in Chemistry in 1995.  With this honor, Mario became the first Mexican-born citizen to ever receive a Nobel Prize in that category.

Other Achievements:  Much of his current research is focused on studying the chemistry of air pollution in the lower atmosphere -- work in which he is collaborating with colleagues from around the world, including Mexico, China, India and the U.S. Such global teamwork illustrates a sincere belief of Mario's: that the atmosphere has no boundaries in preserving our environment for future generations.  He is also advocating that more Latin American countries become involved in these efforts.

Current Activities: Since 2004, Mario has been a professor in the Department of Chemistry and Biochemistry at the University of California (San Diego) and in the university's Center for Atmospheric Sciences at Scripps Institution of Oceanography.  Previously, he served as a professor at the Massachusetts Institute of Technology (MIT).

Education: Mario received his Bachelor's degree in chemical engineering at the Universidad Autonoma de Mexico, Mexico; his Master's degree from the University of Freiburg, West Germany, and his Ph.D. in physical chemistry from UC Berkeley, California.

In His Own Words:  Speaking about the need for more young students to pursue science, he says: "The message to young people is that they can be good at science ...it’s a fascinating profession. With science, you do good to your community, to society. But science is also very enjoyable because it represents a very, very creative process. You have to work hard to do that, but you have to work hard if you want to achieve in any realm.”

November 6, 2012
His invention improved Edison’s electric light bulb, and he executed the patent drawing for Bell’s telephone. Get to know this creative genius! With his mind frequently in motion as a child, Lewis Howard Latimer -- born in 1848 in Chelsea, Massachusetts -- loved drawing at an early age and found…

November 5, 2012
Most famous for inventing Clinistix® -- the "dip-and-read" test that for the first time allowed diabetics to monitor their blood glucose level instantly at home. Her contributions to laboratory science have even been recognized on the show, Jeopardy! PLEASE SHARE IF YOU ARE INSPIRED BY THIS STORY…

Women Who Changed the World Through Science: Rachel Zimmerman

November 4, 2012
PLEASE SHARE IF YOU ARE INSPIRED BY THIS STORY! (Send Us Your Opinion Today:  Have you ever been inspired to greatness in scientific invention at the age of 12 like Rachel? Let us know what you think about her achievement!) Rachel Zimmerman undoubtedly had her teacher’s inspiring "Go for it" advice…

Women Who Changed the World Through Science & Engineering: Molly Stevens

November 2, 2012
Molly Stevens -- Materials scientist Internationally known for her work in nanotechnology to regenerate bone and tissue growth, and to design bioactive materials for early detection of disease  Nanotechnology (the science of manipulating matter at the atomic or molecular level, especially to build…

October 31, 2012
Gregorio Zara -- Filipino physicist and aeronautical engineer Creator of the first videophone ( a forerunner of such video telecommunication applications as Skype, Webcam and videoconferencing) and discoverer of the physical law known as the "Zara Effect." PLEASE SHARE IF YOU ARE INSPIRED BY THIS…