Reading Anund & Qviberg's new guide book on Medieval Uppland, I came across a great religious legend: "The Grateful Dead". (The band got its name from a dictionary entry on this family of stories.) The earliest version of the legend is found in the German Cistercian prior Caesarius of Heisterbach's 13th century book of miracle stories, the Dialogus miraculorum. This book was hugely popular for centuries, and though Caesarius is largely forgotten today, we do remember his chilling line about how to tell a Cathar from a Catholic, attributed by Caesarius to one of the Albigensian Crusade's leaders: "Kill them all and let God sort them out". 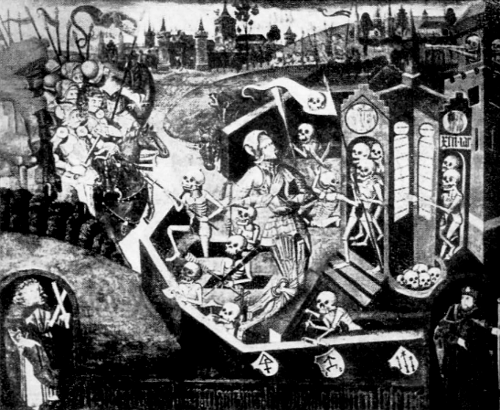 The Grateful Dead on a 1492 votive painting in Kołobrzeg Cathedral.

The cool thing about "The Grateful Dead" is that the story has zombies. Caesarius tells us:

There was a once a man who had the habit, when he passed a churchyard, always to stop and pray for the souls of the dead whose bodies were buried there. Once it occurred that he was pursued by armed enemies into this churchyard, and lo! all the graves in the churchyard opened and one saw all the dead bodies, armed with swords and staffs, hasten to the man's aid. For fear of them, the terrified enemies turned back and ceased to pursue the man.

In the 15th century, this legend was a popular subject of church art across German-speaking Northern Europe. At least four churches in the Swedish province of Uppland has murals of the Grateful Dead: Biskopskulla, Roslagsbro, Rö and Yttergran. The story was lent new relevance by the Late Medieval preoccupation with Purgatory, where much of religious life became concentrated on ways to shorten the period of cleansing torture -- such as indulgences. In that era's interpretation of the legend, the dead rise to save a man who makes a habit of praying for their souls, thus shortening their stay in Purgatory.

And the imagery lives on. In early fantasy games of the Dungeons & Dragons ilk there was a trope about zombies wielding agricultural implements as weapons. I bet this came straight from Medieval art. The image below is from Jackson & Livingstone's bestselling 1982 choose-your-own-adventure book The Warlock of Firetop Mountain.

Zombies by Russ Nicholson, from The Warlock of Firetop Mountain.

Hmmm...undead guardians? The most amusing version of the trope was in the (uncensured version of) "Bodyssey", Richard Corben's parody of sword and sorcery.
BTW, if you set up your own church, what is there to stop you from selling indulgences? And would the indulgences be exempt from tax?
-The Archchancellor of Unseen University did not approve of the undead. When one of his own wizards rose from his wake, he responded with the words "dead people walking around is unhygienic", not the most common reaction in the circumstances.

By an odd coincidence, I just learned about "The Three Living and the Three Dead" from three different sources. It's a late medieval English folktale, although I'm sure there are related folktales throughout northern Europe. Three young noblemen, out carousing like college students, encounter three zombie kings in various stages of decomposition, with predictable results (for medieval folklore). The tale would seem to be the basis of the common English epitaph (which I've personally seen inscribed on native slate in American cemeteries):

Remember this as you pass by:
As you are now so once was I.
As I am now so you will be.
Prepare for death and follow me.

Do you know the old Irish folktale "Tieg O'Kane and the Corpse"? Tieg unwittingly interrupts a fairy funeral, and winds up hauling a living corpse the length and breadth of Ireland to find a consecrated cemetery that will accept him.

Good stuff. And don't get me started on the Totentanz . . ..

(OT) Giant kangaroo zombies? "Cavers find mass fossil deposit Down Under" http://phys.org/news/2012-07-cavers-mass-fossil-deposit.html At only 0.5 Mya they would be candidates for DNA sequencing.

"Medieval Zombies" - for a moment I thought this was your review of the Rolling Stones e-book...

A vampire whackiing zombies -can it get bloodier?

HP, good stuff indeed! Tieg's story seems like something I should look into further.

Thank you, Martin. That was very, very awesome. I'll probably have nightmares this morning, but that's cool.