Changing Fates of the Sälna Runestone

The Stone of Sälna is a runestone (U 323) erected about AD 1000 at Sälna hamlet where a major road crossed Hargsån stream in Skånela parish, Uppland. (This is not far from where Arlanda airport now sprawls.) None of this is unusual. But the stone's great height, its inscription and its later fate are. Here's what can be made out of the runes as they survive today and as documented by a 17th century antiquarian.

Østeinn and Jorundr and Bjorn, the brothers, erected [this] stone [after] ...steinn drums, their father. God help his spirit and soul, forgive him his crimes and sins. Forever shall remain, while there are people, the bridge compactly paved, wide, for the good man. Young men made it after their father. There cannot be a better road memorial. 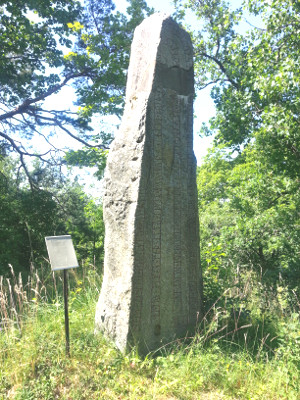 With almost 200 runes, this is one of the longest inscriptions we have, partly composed in fornyrðislag metre, and it is far from the terse formulaic language that characterises later runestones from the boom decades after about 1050. What drums means is uncertain, but it was apparently the dead father's byname. The bridge in question was an earthen causeway.

The Stone of Sälna was left alone until 1820, when the owners of nearby Skånelaholm manor were laying out an English landscape park across a couple of hills. Such a park had to have visit-worthy sites, such as gazebos, waterfalls, lily ponds, fake ruins, why not a fake cave in which a fake hermit could sit during parties and dispense gnomic utterances to passersby. Or why not a runestone. So Mr. and Mrs. Jennings had the Stone of Sälna hauled by oxen from the stream to the top of a wooded hill next to the manor. It proved so heavy that the workmen decided to break it into pieces, losing bits of the inscription in the process. One part of the stone was erected at the end of a path in the park and given an ornamental flower fringe, while two others functioned as gate posts. Such treatment of runestones was not condoned by antiquarians at the time: in 1857 Richard Dybeck would rail against it. 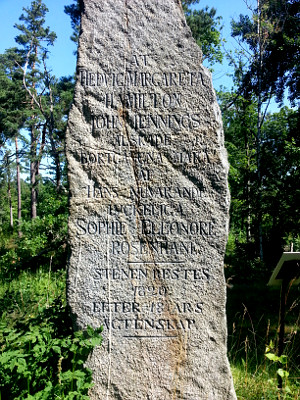 The Jenningses also had an enigmatic inscription added to the stone's back side. The literature I've used suggests that it should be understood in the context of the Romantic era's “companionate marriage ideal … romantic friendship and the cult of true love” (in the words of Axel Nissen).

So we have a second wife commemorating and thanking the short-lived first wife. For what? For dying conveniently? Dybeck characterises the inscription as “meaningless”. My guess is that the incongruous message has something to do with the stone's new function as an easter egg in a landscape park, a humorous curiosity to reward a guest who took the trouble to walk up onto the hilltop. Though semi-public, this message was never intended as a main part of the Jennings' family's public face.

In 1940 the stone was reassembled and re-erected on the park hill – its exact original site having been forgotten. The top piece with half a cross, extant in the 17th century and probably lost in 1820, is still missing.

My friend Howard Williams takes great interest in commemoration, monument re-use and antiquarian attitudes to the archaeological record. Check out his blog with the suitably metal title Archaeodeath!

I've written before about the archaeological landscape surrounding Arlanda International Airport north of Stockholm. Following on yesterday's post about the fake archaeology in Oslo airport, here's a piece of landscape that has been moved inside Arlanda's terminal 2. It's an 11th century runestone…

HÃ¶gby near MjÃ¶lby in ÃstergÃ¶tland is a magical place because of a serious lack of historical sensitivity. In 1876 (which is really late as these things go in Sweden) the locals demolished their little 12th century church and built a new bigger one a mile to the south. This meant that the parish…

Most rune stones are written with the late 16-character futhark and date from the 11th century when the Scandies had largely been Christianised. Their inscriptions tend to be formulaic: "Joe erected the stone after Jim his father who was a very good man". But by that time, runic writing was…

[More blog entries about Sweden, photography, manor; NÃ¤rke, Askersund, foto, herrgÃ¥rd.] My part-time employers, the Royal Swedish Academy of Letters, sometimes receive rather hefty donations. This is how they came to own Stjernsund manor near Askersund in the province of NÃ¤rke / Nericia. (Don'…

Interesting, I wonder if the practice of dedicating civic works to the memory of the deceased was common. It's certainly a lot more practical than stuffing their grave full of treasure. The only other stone I know of is the one on Frösön which also dedicates a bridge -- my dad's family is from around there and he's a bridge engineer so it sticks in the mind.

"It proved so heavy that the workmen decided to break it into pieces, losing bits of the inscription in the process. "